That the winners of an art contest devoted to James Joyce’s Ulysses should incorporate text and collage is fitting—considering the earthiness of Joyce’s imagery and the centrality of collage to modernism in general. 2021 is the second year the Rosenbach has held a Joyce-inspired art contest as part of our Bloomsday celebration. It’s a cliché to say that this year the judging was really hard, but this year it truly was! Our entrants came from three continents, and included re-imaginings of Molly Bloom in various guises, artistic recreations of the text, a sculpture of Stephen Dedalus’s mother in her tomb, and many more. Judges were the victors of last year’s contest, staff members, and Rosenbach board members Lenni Steiner and Perry Lerner, who graciously sponsor the Bloomsday Artwork contest. 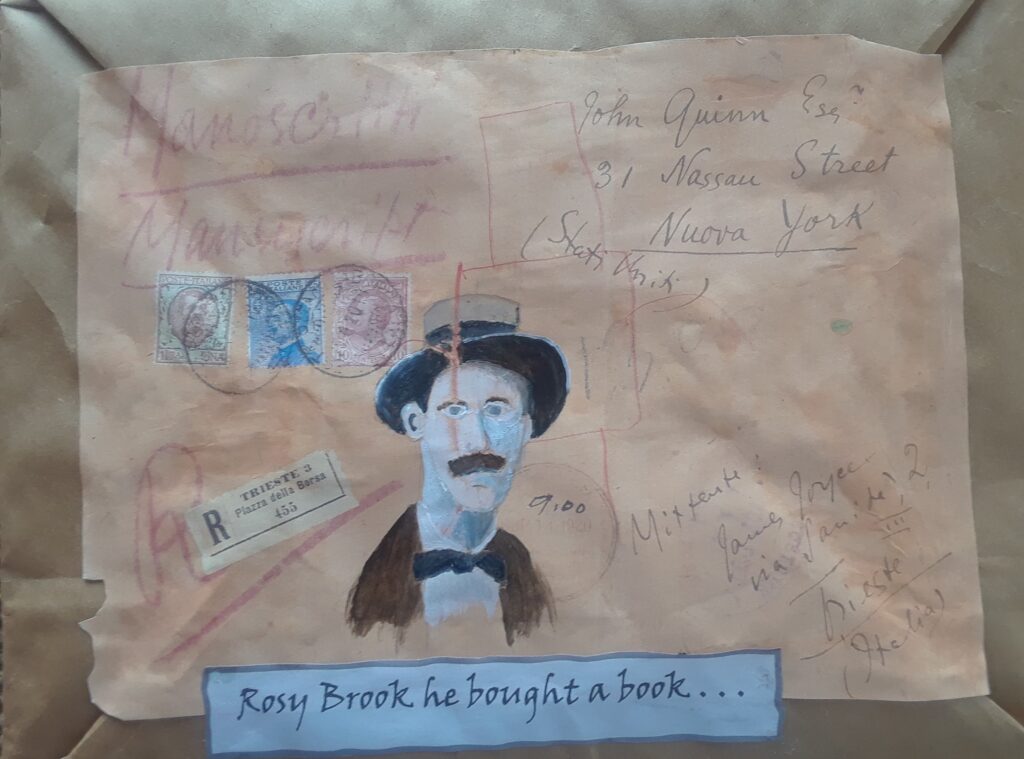 When asked about his inspiration for his victorious entrant, Don responded:

“I loved hearing the story of ASW Rosenbach’s acquisition of the Ulysses manuscript, which I learned at the museum. It’s a publishing and literary saga of the first order. Add the poetic barbs of James Joyce and it’s unmatched. So I imagined the handwritten edition, in its plain brown wrapper, haunted by the spirit of the author, arriving through the mail. It’s a collage – a copy of the package cover, a painted portrait of Joyce, and the first line of his poem to Rosenbach.”

As a former Rosenbach Guide, Don knows well the saga of Abe Rosenbach’s purchase of the Ulysses manuscript at auction, Joyce’s subsequent request to buy it back, Abe’s refusal, and the poetic barb Don alludes to above:

Rosy Brook he bought a book

Though he didn’t know how to spell it.

Such is the lure of literature

To the lad who can buy it and sell it.

Ouch! The story of Abe Rosenbach and James Joyce’s contretemps is told in depth at the Rosen-blog here. The barbed poem is from a letter Joyce wrote to a patron, Harriet Shaw Weaver, and alludes to the misspelling of “Ulysses” in Dr. Rosenbach’s telegram to Joyce. (Please join us in attributing this fateful error to an anonymous telegraph operator.)

For our second place winner, These heavy sands, artist Elizabeth Parker also incorporated text into painting, with results as haunting as they are uplifting: 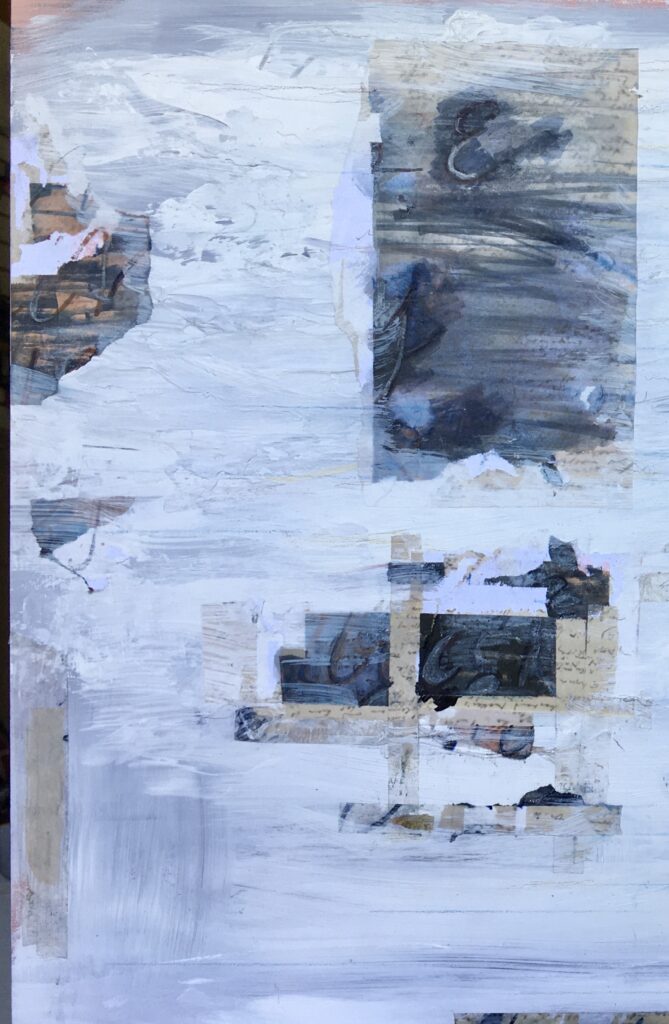 Elizabeth Parker is a visual artist and art-educator from Massachusetts, whose mixed-media work combines painting, drawing, and collage, and is usually inspired and composed by organic processes of growth and decay, and the repetitive emergence/disappearance of fragmentary symbols and text. She was also a winner of last year’s inaugural Bloomsday Art Contest. As an avid reader, Parker often finds inspiration through the imagery and ideas within poetry and literature. Of her lyrical and atmospheric These Heavy Sands, Parker writes:

“These heavy sands are language tide and wind have silted here”–words spoken by Stephen Bloom in the Proteus chapter of Ulysses, evoked in my imagination a multi-sensory experience of the trance state of consciousness that can arise from questing: a state in which one’s inner and outer worlds seem to meet, to speak, to merge.  A sort of inter-dimensional world is created from this catalyzation, with a new language. Using mixed media, including fragments of the Ulysses manuscript, and stenciled words from the sentence above, I sought to visually express such a transformation of language, to depict it in a liminal stage. I hope that the viewer of my work can see the language as it is written in the sand, washed by the tide, carried by the wind.”

So both winners of the Bloomsday Art Contest this year not only incorporated text and collage, but also time—as the arena in which language, accurate or altered, understood or misunderstood, is transmitted and transmuted. We hope that James Joyce’s Ulysses speaks to you this year! Happy Bloomsday!