A series of informal, intimate talks given by literary and cultural luminaries, In Conversation with the Rosenbach delves into fascinating histories, intellectual curiosities, and inspiring ideas. Each program offers the audience a chance to join the conversation after the talk and share their own thoughts and questions. Join us February 2 as art historian Amy Herman teaches us to look more closely at the world and recognize the most pertinent and useful information in any scene.

Rosen-blog: You have degrees in international affairs and law as well as art history. What led you toward an education and ultimately an occupation in the arts?

AH: I cannot overstate the value of a liberal arts education. The ability to communicate with clarity and precision has been the cornerstone of my professional life. My work in the arts is grounded in a love of art history. I have always had a special appreciation for visual art and found a way to combine visual analysis and legal analysis to create The Art of Perception.

RB: Your organization, The Art of Perception, Inc., conducts visual intelligence courses for professionals in a wide range of fields including law enforcement, medicine, education, and the military. You must have a lot of fascinating stories from your sessions; are there any great teaching moments you can share?

AH: Yes. About three years ago, a homicide detective told me that they had a puzzling case on their hands. A victim was found with no identification and they were looking for clues that might give insight into her whereabouts before the crime was committed. He said that my course instilled the importance of small details that are hiding in plain sight. He looked at the victim more closely and noticed a new and fresh matching manicure and pedicure. It led the investigators to look farther away from the scene where she was found and to the closest salon where she was identified. From there, they traced her path to the salon and eventually apprehended the killer. All from noticing a manicure and a pedicure. As one intelligence analyst once said to me, “You really opened my eyes. The problem is, I didn’t know they were closed.

RB: In interviews, you mention taking said professionals to art museums to get them out of their everyday environments in order to practice the art of perception. What other lessons might museums of fine and decorative arts hold for the average visitor?

AH: Museums offer the perfect opportunity not only to change the physical environment but to distance ourselves from our digital screens. Technology is invaluable but it is incredible what you can see with your own eyes when you turn the screens off, even for an hour.

RB: Do you have any upcoming projects you’d like to talk about?

AH: Fox Studios have purchased my book, Visual Intelligence, and hopes to make a crime series for television this year. It is very exciting but I never imagined that my work in The Art of Perception would have ever been adapted for television. 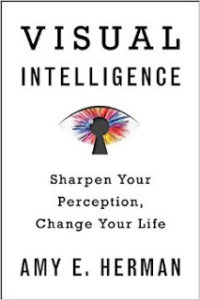 RB: What is your favorite book or object in the Rosenbach collection?

AH: I love the Marianne Moore collection. In particular, I have seen a photograph of the poet throwing a baseball at a Yankees game. I find images that bring together unlikely alliances to be thought provoking and eye opening. Her suit, hat, and almost other worldly expression juxtaposed with the familiar images of baseball is just exquisite. It is the collision of two worlds in a visually compelling photograph.