Finding a letter in The Rosenbach archive written in the hand of the great Alain LeRoy Locke was quite an event here on Delancey Place. The letter came to light while we were looking through Rosenbach Company files for information on our manuscript of Batuala, a novel by the French Guianese writer René Maran. Poet Yolanda Wisher had chosen it to be the theme for her quarterly Rent Party at The Rosenbach, and in addition to live music from Wisher’s band, the Afroeaters, party-goers would hear Wisher’s overview of Batuala and its author, an excerpt from the novel in the original French, and see an English edition of Batuala open to a radiant illustration in our Programs  Gallery (where objects from the collection add a further dimension to Rosenbach programming). 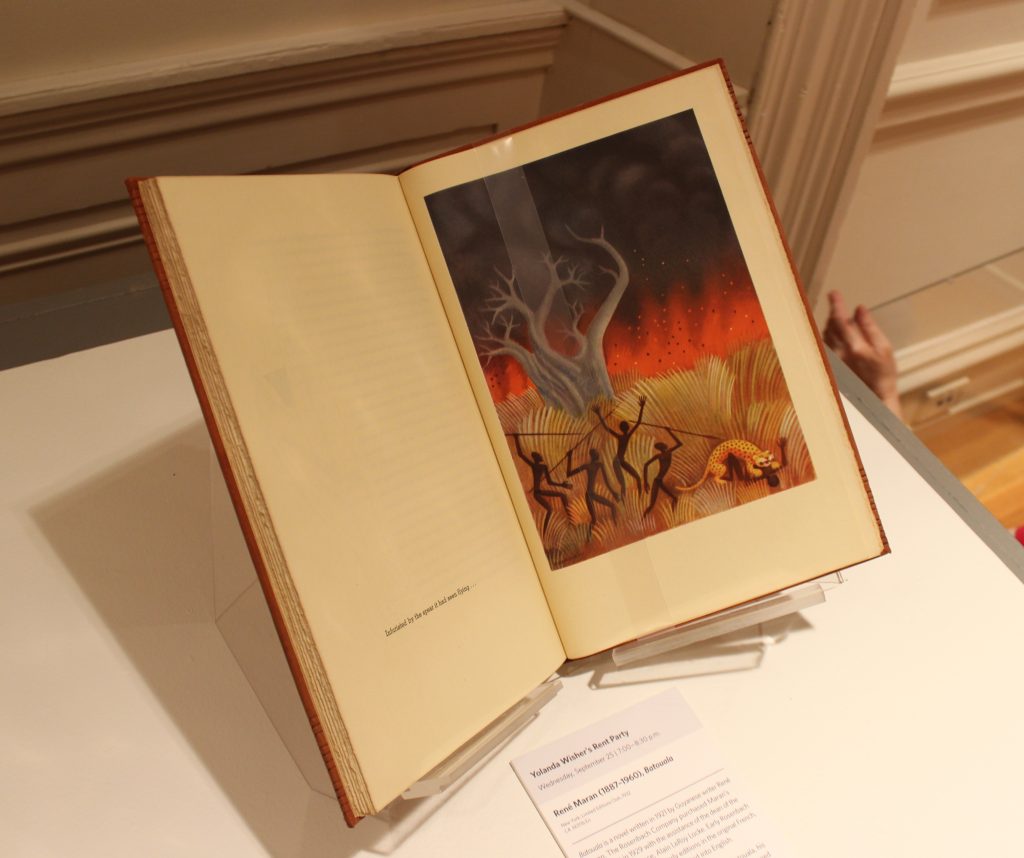 Hence, it was a fact-hunt for an exhibit label that led us deep into The Rosenbach Company archive where the Locke letter was discovered. We had wanted to know how the manuscript for Batuala—the first novel by a Black writer to win the Prix de Goncourt, France’s Pulitzer, had found a home in a Philadelphia rare book library. When we opened the file on René Maran, and our wondering eyes fell on the signature of Alain Locke, you can imagine what an electrifying moment that was on Delancey Place! 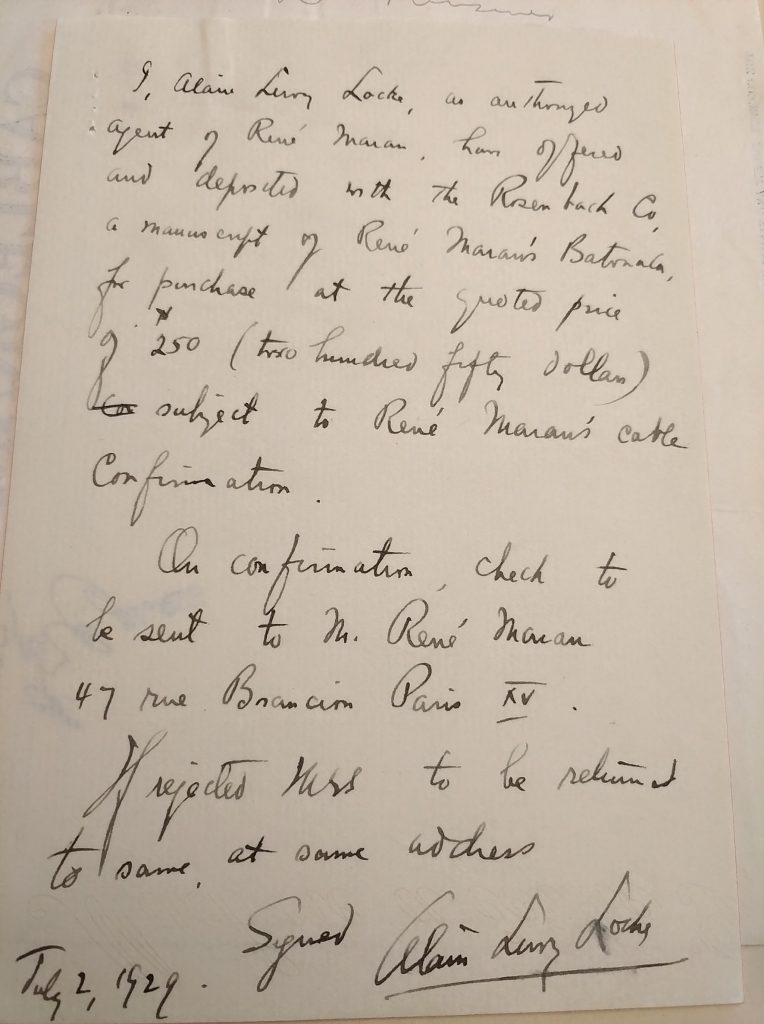 About Locke: That Langston Hughes, Zora Neale Hurston, and Countee Cullen are on the syllabus now is partly due to Alain LeRoy Locke’s advocacy. Locke’s 1925 book The New Negro broke ground for a generation of African American writers then coming into distinction. Because an academic idiom seems to fit this much-degreed philosopher, he is commonly referred to as the “Dean” of the Harlem Renaissance. (After studying at Oxford and the University of Berlin, Alain Locke earned his Doctor of Philosophy at Harvard, and taught at Howard University for 41 years). “Philosophical Midwife” is how Locke described his role in the Harlem Renaissance, and Philosophical Midwife may be a better fit for Locke’s gender-liminal persona and nurturing work on behalf of Black writers.

In his letter to The Rosenbach Company, we see Locke in action as an advocate for Black literature, offering Maran’s Batuala manuscript for $250.00, “subject to René Maran’s cable confirmation.” Before the cable confirmation arrived, and while Locke’s envelope likely collected coffee rings on a Rosenbach Company desk, a second letter came from Paris—this one from Maran—asking what the delay was at Rosenbach headquarters. 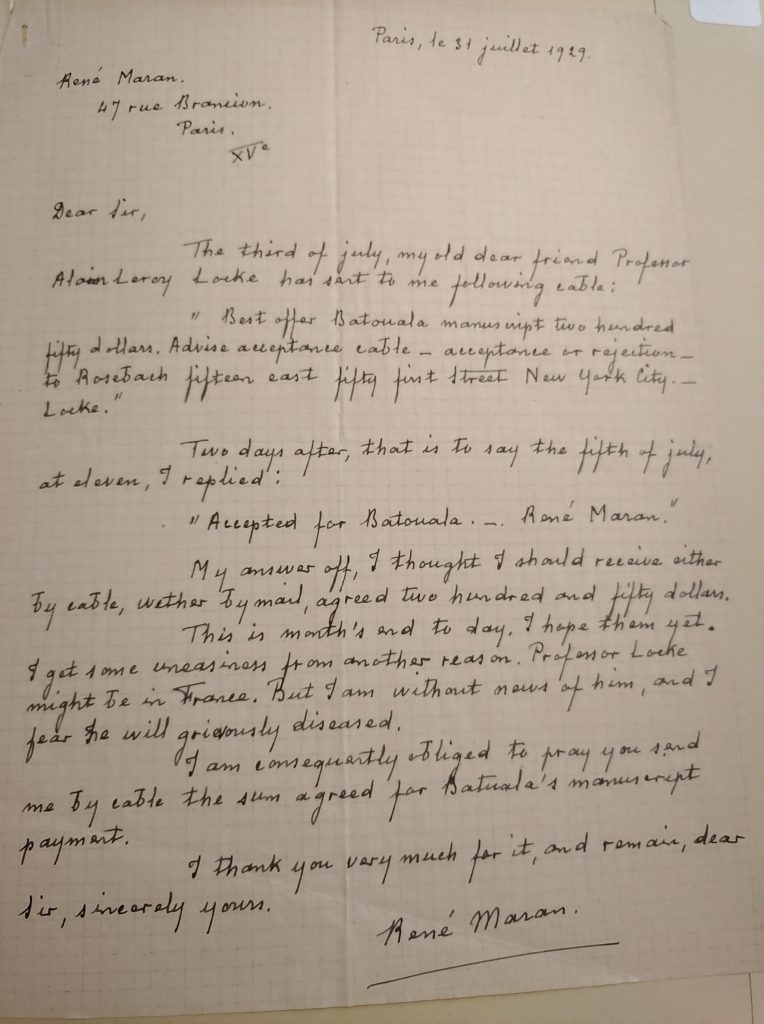 An apologetic response from the Rosenbach Company followed, accepting both the manuscript and Maran’s price, and a cable confirmation from Maran sealed the deal. In time, the Batuala manuscript graduated from the Rosenbach Company to the Rosenbach Museum and Library, and spent years hidden behind the frame of a bookcase door beside other codices, or book-shaped manuscripts (we’ve since moved it to be visible on tours). Meanwhile, the Locke letter that accompanied Maran’s manuscript lay curled in a ninety-year chrysalis, only unfurling its rainbow wings when rediscovered last autumn. The parallel journeys in and out of obscurity taken by these Black literary artifacts echoes the journey taken by Locke’s own remains, which spent sixty years in archival limbo before receiving their proper internment at the Congressional Cemetery, Washington, D.C. in 2014.

Uncovering the Alain Leroy Locke letter was one of those moments when the Rosenbach collection seems a living ecosystem of knowledge, ever growing and changing, and responding with sensitivity when queried. Though we have collections guides to help researchers and the public access our library’s holdings, the Alain LeRoy Locke letter was listed in neither our People of Color nor our LGBTQ finding aids. When a museum object becomes a source of inspiration for the community, it truly comes to life—and the life that the Locke’s legacy promises is indeed an inspiring one. In a 1968 speech, Dr. Martin Luther King Jr. placed Locke alongside William E.B. DuBois as an example of a black philosopher he foresaw young people one day learning about alongside Plato and Aristotle.

Locke’s reemerging presence at the Rosenbach claims a place for us to contemplate the elemental impact of black and gay genius on American culture. You can see the letter in our upcoming virtual tour: Black Writers, the Jazz Age, and the Harlem Renaissance at The Rosenbach on February 25, 2021.

One thought on “Alain Leroy Locke and Philosophical Midwives”