Could a poem inspired by an obscure folly, no matter how beautiful, hope to be anything but an obscure folly itself? Case in point: the masterful sonnet written by Robert Browning in honor of Helen’s Tower, a 19th century architectural folly built by an Anglo-Irish aristocrat in honor of his mum. The question springs to mind as we look ahead to the first Bibliococktails of 2020, inspired by poetic power couple Robert and Elizabeth Barret Browning. The Brownings are present in Dr. Rosenbach’s library in the form of one manuscript each. Elizabeth’s manuscript, for her poem Only a Curl, shows the preeminent poet, almost-laureate, social justice warrior, and technical virtuoso at her most tender, penning a letter of comfort and solidarity to an American fan mourning the death of a child. Husband Robert’s manuscript lives beside it on the Rosenbach shelf, in this red leather binding, with an image of its subject, Helen’s Tower, on the front: 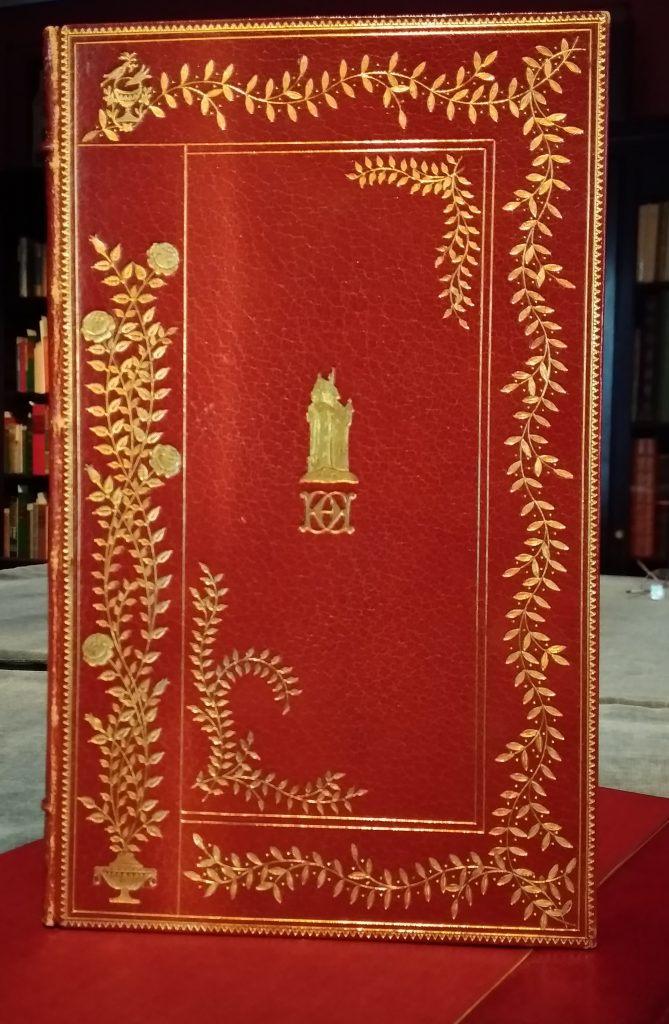 If you think that those roses climbing from a funerary urn are the most Victorian thing ever, we are in hearty agreement. And if the tower on the binding calls to mind a fairy fortress from your Disney-suffused childhood, I assure you that the real Helen’s Tower—for it is a real place—looks no less Rapunzel-worthy. Architectural follies exist to delight the eye and caress the sensibilities; if Helen’s Tower began as a memorial to filial love and now serves as a tourists’ wayside (£292 for 2 nights, all mod cons), its chief role will always be that of an outpost of imagination on reality’s home turf.

Some backstory on the titular tower of Browning’s sonnet. Aristocrat and career diplomat Frederick Hamilton-Temple-Blackwood (1st Marquess of Dufferin and Ava to you) was a known spendthrift. The tower he built for mum, in a style salvaged from the Victorian Age’s bottomless dumpster of recycled architectural fashions (here, Scottish Baronial, a sub-genre of Gothic Revival) is unquestionably beautiful: fanciful yet austere, grand but welcoming. Its third floor is an octagonal room with oak paneling, which originally housed a rare book library and manuscripts of poems the Marquess solicited from friends like Tennyson, Kipling, and Browning to honor his, by all accounts, charismatic and goodhearted mother: poet, playwright, and songwriter Helen Selina Blackwood. A descendent of the Marquess sold the books and manuscripts, including the Browning, to our own Dr. Rosenbach, whose luck, charm, smarts, and scholarly cred gave him an almost magical ability to access literary treasure houses other book dealers only dreamed of entering. Thus, this beautiful Browning manuscript of a poem written about a beautiful fantasy edifice that was built for a beautiful and witty blueblood takes its place as a Philadelphia cultural treasure, albeit, a quirky and—at least on the surface–enigmatic one. Below, on the right, is the manuscript of Browning’s poetic tribute, beside his sweet and modest accompanying note (“…here is the best I can do…”) to the Marquess of Dufferin: 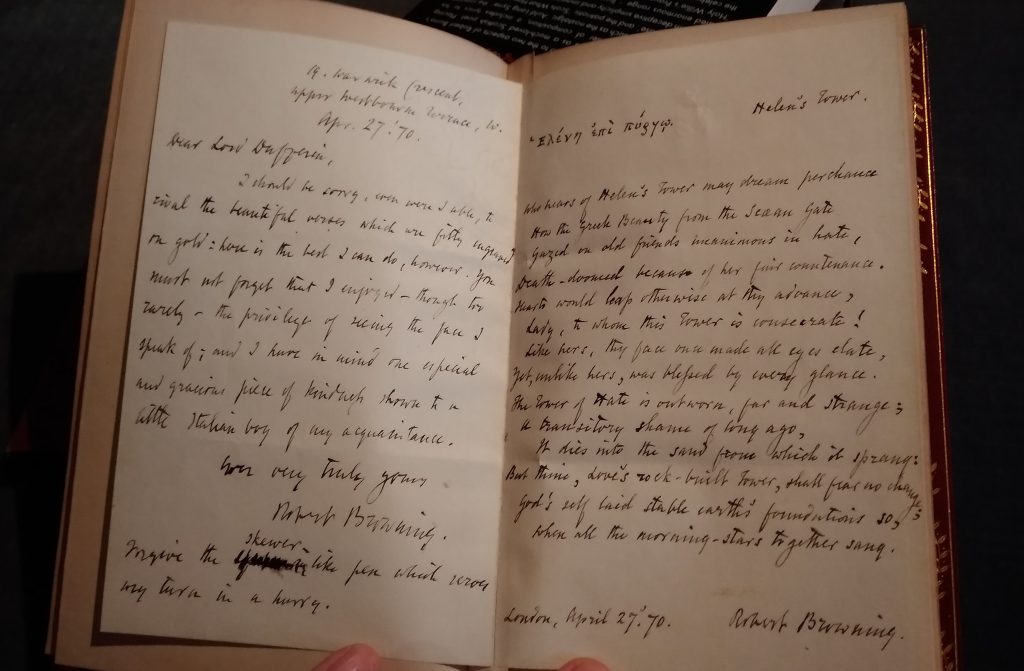 And that’s only the second most famous poem written for Helen’s Tower (admittedly, a rarified category). The first is by Alfred Lord Tennyson; I tend to feel the Browning version is unfairly slighted against Tennyson’s singsong doggerel, so we’ll give Browning and Tennyson the last word(s) here, that you may judge for yourself:

Helen’s Tower, here I stand,
Dominant over sea and land.
Son’s love built me, and I hold
Mother’s love in lettered gold.
Love is in and out of time,
I am mortal stone and lime.
Would my granite girth were strong
As either love, to last as long
I should wear my crown entire
To and thro’ the Doomsday fire,
And be found of angel eyes
In earth’s recurring Paradise.

Who hears of Helen’s Tower, may dream perchance
How the Greek Beauty from the Scaean Gate
Gazed on old friends unanimous in hate,
Death-doom’d because of her fair countenance.
Hearts would leap otherwise, at thy advance,
Lady, to whom this Tower is consecrate!
Like hers, thy face once made all eyes elate,
Yet, unlike hers, was bless’d by every glance.
The Tower of Hate is outworn, far and strange:
A transitory shame of long ago,
It dies into the sand from which it sprang;
But thine, Love’s rock-built Tower, shall fear no change:
God’s self laid stable earth’s foundations so,
When all the morning-stars together sang.

And please do join us for the first Bibliococktails of the new year, with a heart-warming cocktail inspired by the poet many consider the greatest of the Victorian Age, and her husband and biggest fan, Robert.

Bibliococktails | Barrett and Browning in Love