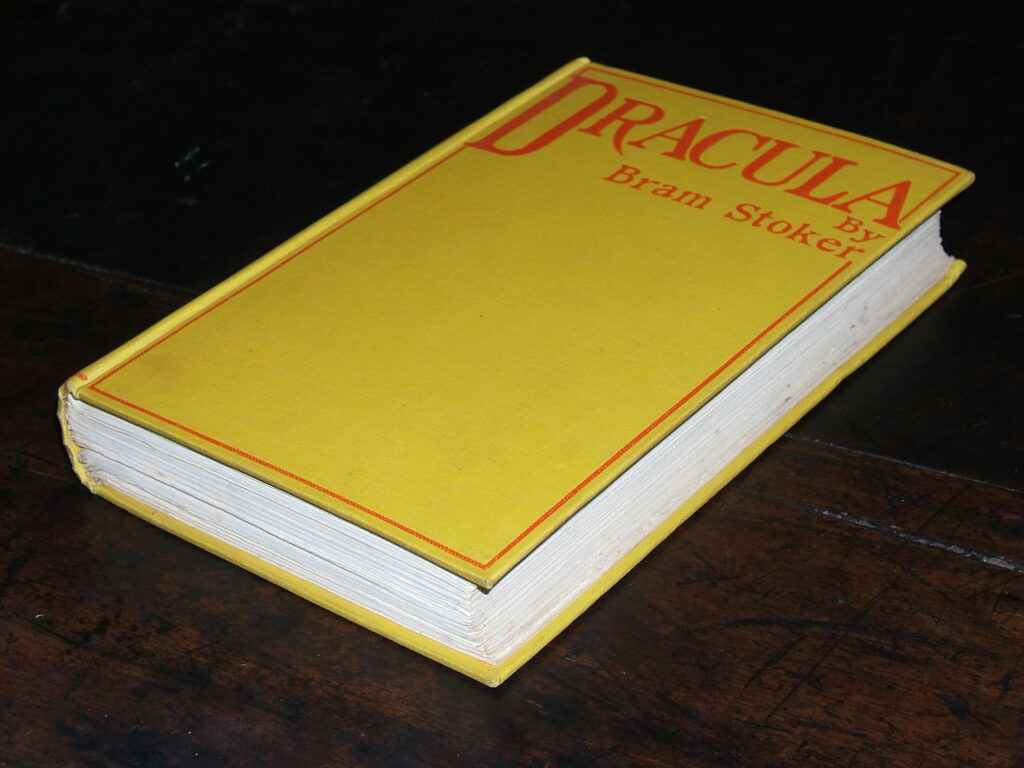 On May 26, 1897, visitors to bookshops in London found a new book, for just six shillings, published by Constable and Co., bound in a lurid yellow cloth cover with blood red letters announcing its strange title, Dracula.  For six shillings, readers discovered a story told in letters and diary entries, about an undead Transylvanian vampire who comes to England to find fresh victims to satisfy his thirst, and the band of holy warriors who must fight his attack. The author, Bram Stoker, had already published five books of novels and stories, but Dracula would become not just his own most famous creation, but also the most famous vampire story ever written. While not a bestseller in its day, the novel was popular enough to remain in print and after stage productions and the films in the 1920s and 1930s, Dracula ascended into the pop culture stratosphere.

In the ensuing 125 years, Stoker’s Count Dracula has become the vampire to which all other blood-suckers, even those who came before Stoker, must contend. So well-conceived and researched was Stoker’s novel, that it seemed on first publication to be a compendium of vampire lore, and has since become a kind of manual for the undead. Published at the end of the Nineteenth Century, a literary and artistic period known as the “fin de siècle” (or “end of an age”), Dracula is a novel of social, sexual, and political anxieties that overflow its pages, thrilling its earliest readers, but also continuing to attract readers over a century later with the prescient way it deals with the the primitive fears which still lurk in our hearts.  Dracula is a monster not for an age, but all time.

The Rosenbach is the home of Bram Stoker’s Notes for Dracula, over 100 pages of outlines, early plot ideas, and research notes, compiled by the author over the seven years he developed and wrote the novel. After Stoker’s death, his widow sold his library, including his Notes for Dracula, which were bought for £2, 2 shillings, and later made their way to the inventory of the American publisher Scribners.  In 1970 they turned up at Sessler’s, an antiquarian bookseller in Philadelphia, where they were purchased by the Rosenbach Museum.

While a typewritten complete draft of the novel does exist (and is in the collection of The Museum of Pop Culture in Seattle, Washington), the Notes are an extraordinary record of the conception and development of one of the most popular novels in the English language. We get a glimpse of the many books and articles Stoker used to research his settings in the novel, including the historical and geographical context of Count Dracula’s homeland, Transylvania.  We also see an author creating, from ancient lore and recent folk beliefs, a monster that had been featured in fiction, but never carefully defined.  Stoker’s Dracula became a kind of taxonomy for vampires and the Notes are where we see the work of the vampire hunter.

The works of Bram Stoker in the Rosenbach’s collection has continued to grow over the years with the acquisition of first editions of the novel, including a signed copy Stoker gave to Lord Tennyson (not that Lord Tennyson, but Alfred’s son, Hallam), and most recently, the first paperback edition, abridged by the author and featuring the first Stoker approved illustration of the vampire on its cover, as well as an original Colonial edition of the book and the first edition in the Irish language from 1933.  You can find more about our Dracula and vampire related materials here and about our specifically Bram Stoker holdings here.

In 2020, when the Rosenbach closed it doors for the pandemic, we launched a special online program, Sundays with Dracula, in which host Edward G. Pettit and a group of cohosts, analyzed the novel, one chapter per week for 27 weeks. The novel’s storyline is also 27 weeks long, beginning with Jonathan Harker’s journal entry of May 3 and ending with the final confrontation with Dracula on November 6.  You can watch all the Sundays with Dracula episodes here.

Over a century after its first publication, Bram Stoker’s Dracula remains a touchstone work of monster literature, and grandsire of all vampire progeny since. If you’ve never read it, you’re in for a treat (and you can watch our Sundays with Dracula to help guide you along), and if you’ve read it many times, you already know it’s a novel that continues to thrill and reward revisiting. Dracula never dies.