August 1, 2019 marks the 200th anniversary of Herman Melville’s birth. In honor of his bicentennial, we are proud to present American Voyager: Herman Melville at 200, a new exhibition that will explore the life, works, and legacy of this iconic but under-read author. To celebrate his birthday, we’ve asked The Rosenbach staff to share their favorite connections to the seminal writer and their perspectives on his continued impact. 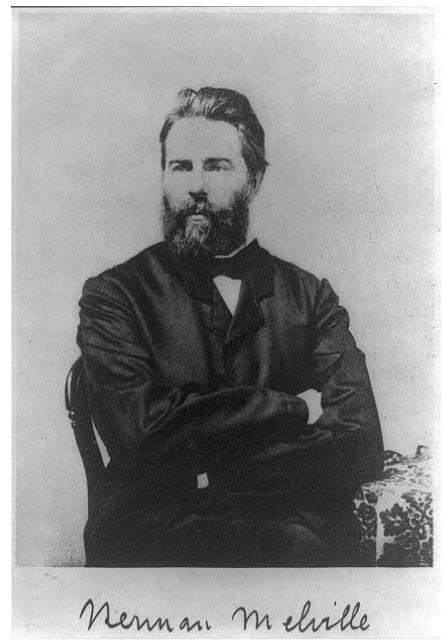 “Why read the works of Herman Melville in the 21st century?  The Collections Department at The Rosenbach has been mulling over this question while busily preparing our American Voyager exhibition for fall, 2019—and deciding how best to interpret our library’s phenomenal collection of Herman Melville books and manuscripts in our galleries.  In so many ways, Melville’s life represents the promise, perils, triumphs, tragedies, and complex legacies of the nineteenth-century United States, but I personally am most intrigued by his writings’ immortal, universal qualities.  Melville had a unique ability to dive into the depths of human motivations and create novels, short stories, and poems that offer deep insights into the human experience.  Visitors to American Voyager will be surprised to see how directly Herman Melville’s writings address critical issues of our own era, including gender, sexuality, race, American politics as well as human impact on the natural world and the oceans in particular.  In an introduction to a 1928 Doubleday edition of Moby-Dick, Dr. A.S.W. Rosenbach wrote: “I have no doubt that Moby Dick, the White Whale, still lives, deep down in the profundities of the sea, and every reader of Herman Melville who crosses the great oceans expects some day to meet him in his huge, quivering flesh.  For Melville created in Moby Dick something that will survive as long as the sea itself, an incarnation that will grow more vivid, more permanent with the roll of the years.” Dr. Rosenbach was right: Moby Dick still lives, years after Herman Melville conjured him, as an icon of American literature and a looming reminder of the perils humans face when they spar with the greatness of the natural world.”

“Although many people know Herman Melville only as the author of Moby-Dick, through our recent work preparing an exhibition and programs for his birthday celebration this year, I’ve come to see him as something of a fellow traveler—quite literally! Melville got his start as a travel-adventure writer, having taken to the sea for work and later writing novels about his experiences in exotic locales. Even his most famous work reflects elements of his time aboard ship. His later epic poem Clarel: A Poem and Pilgrimage in the Holy Land, was inspired by an earlier voyage.

Our exhibition notes that Melville used his travels to reflect back on his country and on himself. It reminds me that travel provides an opportunity to learn, just as Melville did, about the new environment in which I find myself, from the people I meet, and also about myself and my home, but from a new perspective. Even as travel has become more inconvenient, it still calls to me, and now I’ll always think of Herman Melville, who inspires me to look back, look within, and use this experience on the road (the sea, the air?) to create, to offer critique, and to better understand both the familiar and the new.”

“So, yes, Herman Melville is a great author who provides deep insight into human nature and addresses topics of crucial importance today. But you remember that reading Moby-Dick seemed to take as long as a real whaling voyage. And it’s too hot now to think about big ideas anyway. You can still observe his anniversary by reading some of his work in less taxing ways.

The short pieces in The Piazza Tales are good places to begin. “The Lightning-Rod Man” is a brief, vivid portrait of a fanatic. Read it during a thunderstorm for extra credit. If this weather has you longing to escape to the mountains of New England, you’ll find them beautifully described in “The Piazza” (though you’ll also be warned about the futility of escape fantasies). If you can stand the heat, take “The Encantadas” tour of the Galapagos.

And Moby-Dick has plenty to offer even if you don’t read it all. If you’re an Ahab who needs to find and slay the monster, just read the chapters that advance the plot. Skip those parts that got in your way in high school: the natural history of whales, pictures of whales, legends about whales, how to cut up a whale, sermons, layovers, random philosophizing, whatever keeps you from enjoying the adventure story. If you’re an Ishmael, who has nothing particular to do and just wants to sail about a little, try those chapters as stand-alone pieces. I love digressions, lists, technical language, specialized tools, and finding familiar things in unexpected places, so I like these parts best. There’s beauty, insight, and even humor in chapters like 55, “Of the Monstrous Pictures of Whales;” 60, “The Line;” and my favorite, 102, “A Bower in the Arsacides.” Read one way at one time and the other way at another to find out what each contributes to the book. Maybe you’ll be inspired to attempt the whole thing. If not, you’ll still be reading Melville.”

“I read Billy Budd in high school, but didn’t read Moby-Dick until 2013 (before coming to The Rosenbach) in preparation for the Fluid Movement Water Ballet in Baltimore. My scene represented the whale fighting Captain Ahab. The whale was eventually “harpooned” with a pool noodle, so I am particularly excited that we have both a killing Lance and toggle harpoon on loan from the Independence Seaport Museum for American Voyager!”

Few American writers have achieved the cultural impact of Herman Melville, author of the eternal classic Moby-Dick, yet he died unrecognized by his contemporaries for his genius. To commemorate the 200th anniversary of Melville’s birth, our new exhibition, American Voyager, and related programs will explore the life, works, and legacy of this iconic but under-read author.