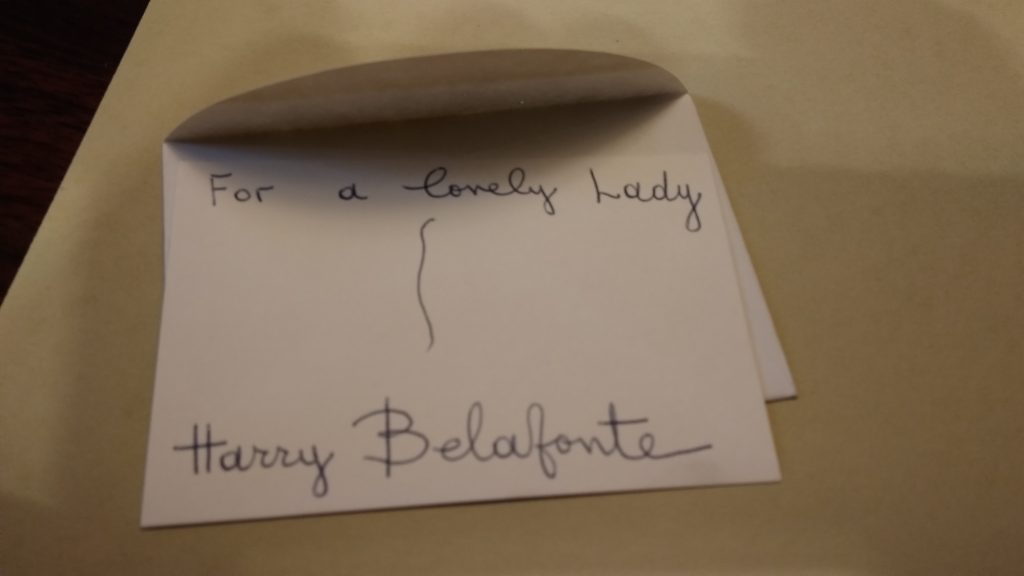 The lovely lady Harry Belafonte is addressing here is the modernist poet Marianne Moore, whose archive resides with us at The Rosenbach. For one week in February of 1968 Harry Belafonte hosted The Tonight Show, and Moore was one of his guests. The Rosenbach has handwritten notes of thanks from Belafonte to Moore, a rough draft of Moore’s thanks to Belafonte, and Newsweek and New York Times reviews Belafonte sent Moore. The photos I’m using here are ones that I took for research and were not originally intended for the blog, so I apologize that they are not the crispest. From a Newsweek review, here’s Belafonte at The Tonight Show desk on the very night that Moore joined him, Wednesday February 7, 1968: 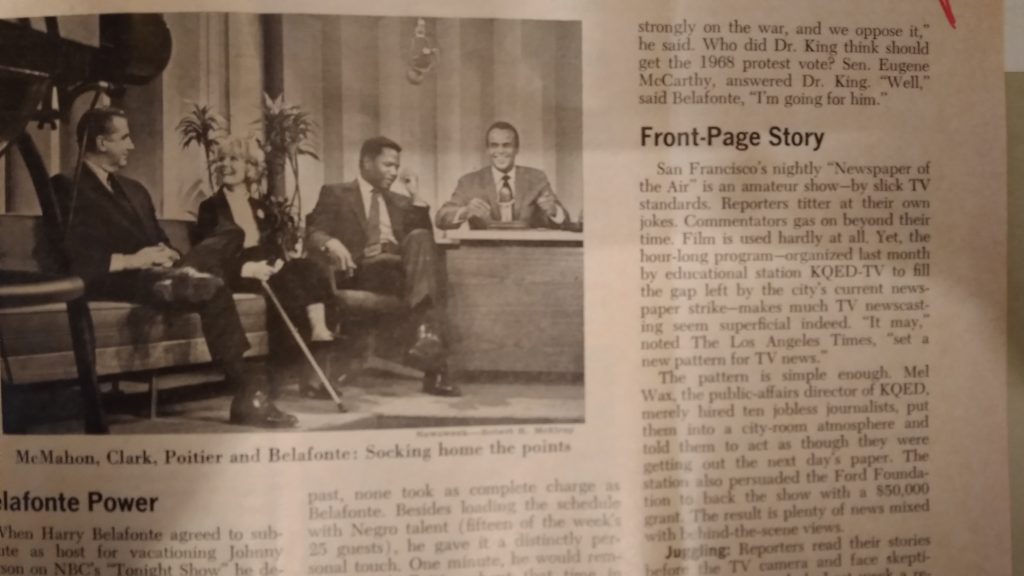 Harry Belafonte was a much-loved actor and musician, and, at 93, still is—as I learned when I mentioned at a Rosenbach staff meeting that I would be doing this article! His deep involvement in the Civil Rights movement would ensure him a place in US history even if there had been no hit records or films; when Martin Luther King and other activists were held in a Birmingham jail, it was Belafonte who raised the funds for their bail. Belafonte’s ability as a Black leader in the 50s and 60s to use television as an instrument for his artistic and political vision was prodigious. For two examples of his tactical genius: this article in the The Virginia Quarterly Review tells how Belafonte worked around Revlon and CBS to produce his 1959 special Tonight with Belafonte just as he envisioned it, and this article in The Guardian tells how he and British singer Petula Clark stood their ground against racist censorship at NBC, and won.

Belafonte’s week at The Tonight Show, subbing for then-host Johnny Carson, made for a week of memorable television. In his autobiography, My Song, Belafonte writes, “There wasn’t any black talk-show host on television… And Johnny Carson’s seat wasn’t just any talk-show host’s seat. Carson was the king of late-night; the whole country tuned in. My hosting the show would be breaking a barrier of significant proportions.” Chosen by Belafonte, the week’s lineup was majority African American. Dr. Martin Luther King Jr. and Senator Robert F. Kennedy came for a half hour each of extended conversation. Belafonte voiced his opposition to the Vietnam War and spoke out about the treatment of African Americans and Native Americans in the United States. Lena Horne sang. Aretha Franklin, Paul Newman, and Sidney Poitier were among the guests. The week was a ratings success, even beating Carson’s New York viewing average. Because NBC rerecorded over old tapes to save money these historic episodes, sadly, were not preserved. The only survivors from Belafonte’s week are the Martin Luther King and Robert Kennedy segments, which were rescued by an unknown hero on the NBC staff. To get a deeper sense of the social, political, and artistic notes Belafonte hit while helming The Tonight Show, Joan Walsh’s 2017 article in The Nation gives an eloquent account.

In his memoir, Belafonte writes that the most important componant for his Tonight Show week was “a handpicked list of guests with whom I had a lot in common, so we could speak with intelligence and passion.” Marianne Moore had been on The Tonight Show before, discussing baseball, a favorite subject of hers, with Jack Paar, the host before Carson. In Moore’s biography, author Linda Leavell writes that Belafonte chose Moore to be his Tonight Show guest not on the strength of her winning public persona or previous Tonight Show appearances, but on the strength of her art and the profound meaning it had for him personally: “When Belafonte introduced her, he said that three years earlier he was feeling depressed about the civil rights movement and the Vietnam War when someone recommended Miss Moore’s poetry to him.” During Moore’s segment, Sydney Poitier read a section of her poem “In Distrust of Merits.” Moore later learned that “Belafonte was brought to tears by the lines and for a moment could not speak.” Here is the passage Poitier read on The Tonight Show:

The world’s an orphans’ home.  Shall
we never have peace without sorrow?
without pleas of the dying for
help that won’t come?  O
quiet form upon the dust, I cannot
look and yet I must.  If these great patient
dyings-all these agonies
and wound bearings and bloodshed—
can teach us how to live, these
dyings were not wasted.

And here is the thank you note Belafonte sent Moore: 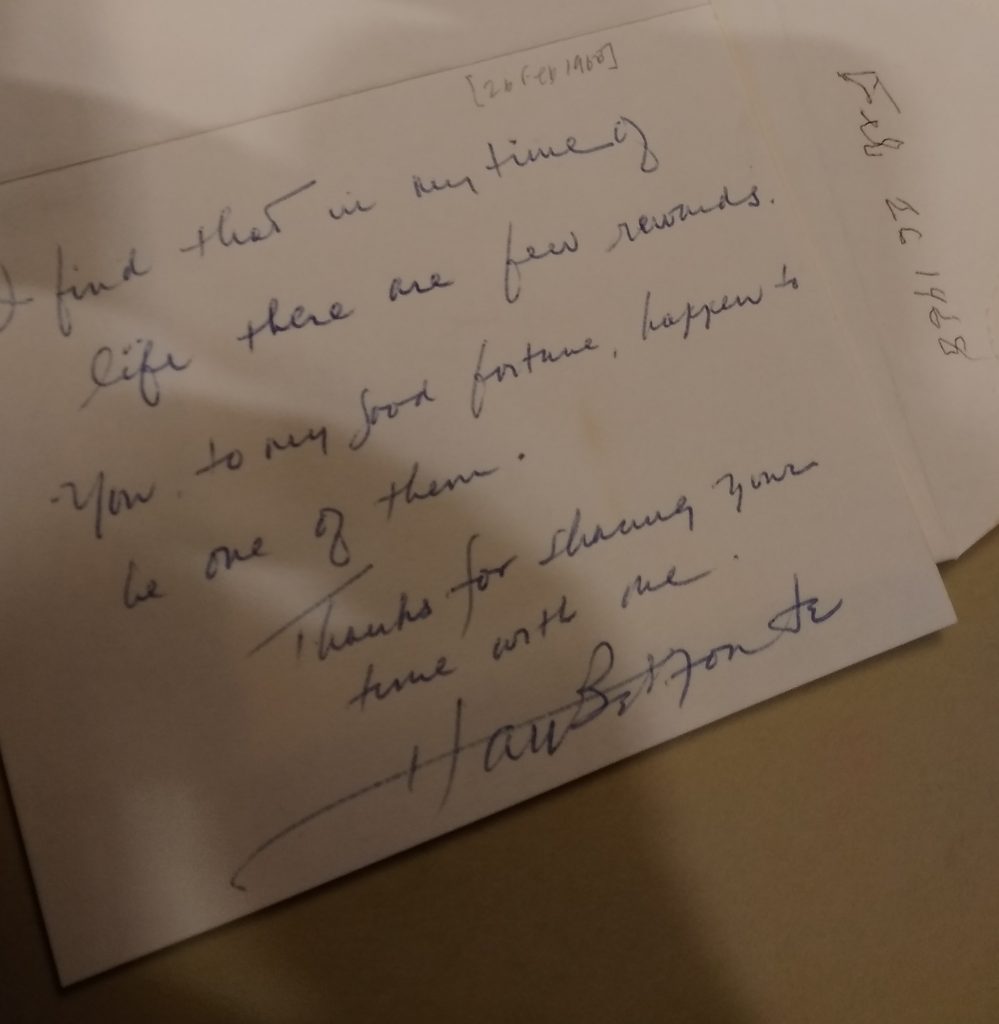