One painting in the Rosenbach collection which is rarely seen by the public is this painting of Anne of Cleves, which normally hangs in a staff meeting room here at the museum. 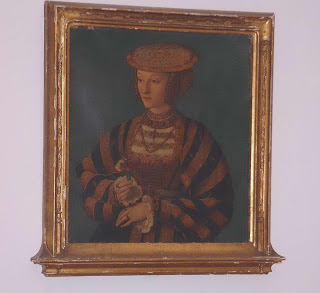 For those of you who don’t recall all of your Tudor history, Anne was Henry VIII fourth wife. It was a singularly unsuccessful marriage which lasted only six months before being annulled–the marriage was never consummated and after their wedding night Henry famously claimed “I liked her before not well, but now I like her much worse.” He complained about her appearance and said she had bad body odor.

In any event, this painting was listed on an old catalog card as being possibly by Holbein (who painted the famous picture of Anne of Cleves now at the Louvre), so when I was looking for objects to include in our upcoming exhibit “Friend or Faux: Imitation and Invention From Innocent to Fraudulent” (which opens November 11) I thought this painting might bear a little looking into its back story. Little did I know what I’d be getting into.

It turns out that there is a nearly identical painting of Anne which belongs to St. John’s College, Oxford. 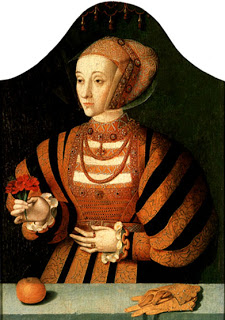 An article on the St. John’s version in Burlington Magazine (1992) noted the existence of our version, which the authors knew about from old auction catalogs, but listed it as “whereabouts unknown”. So it was a real pleasure to be able to contact the folks at St. John’s and let them know where Anne’s twin painting was hiding out. Even more intriguing, there is apparently a third nearly identical version which was once in the shop of the dealer Dowdeswell, but its whereabouts are also unknown. 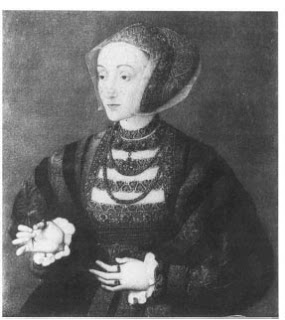 So what’s going on? Which is the original and which is the copy? As it turns out all three paintings may well have come from the same workshop at around the same time; it was not unusual in the time of the Tudors for an artist’s workshop to make multiple copies of a famous sitter’s portrait from a prototype. So one of them might be the original prototype, but it could just as well be that they are all copies of yet another (lost) painting. To know more it would be very helpful to be able to put these paintings side by side, but given the geographic distance between the two known versions and the unknown whereabouts of the third, that seems unlikely to happen any time soon.

This only scratches the surface of the questions that have swirled around the Rosenbach’s painting–when was it painted, what about the artist, is it even really Anne of Cleves? To get the whole scoop you’ll have to mark your calendars for the Friend or Faux exhibit. Of course if you don’t like any of these three versions of Anne of Cleves there’s always Joss Stone from HBO’s the Tudors…