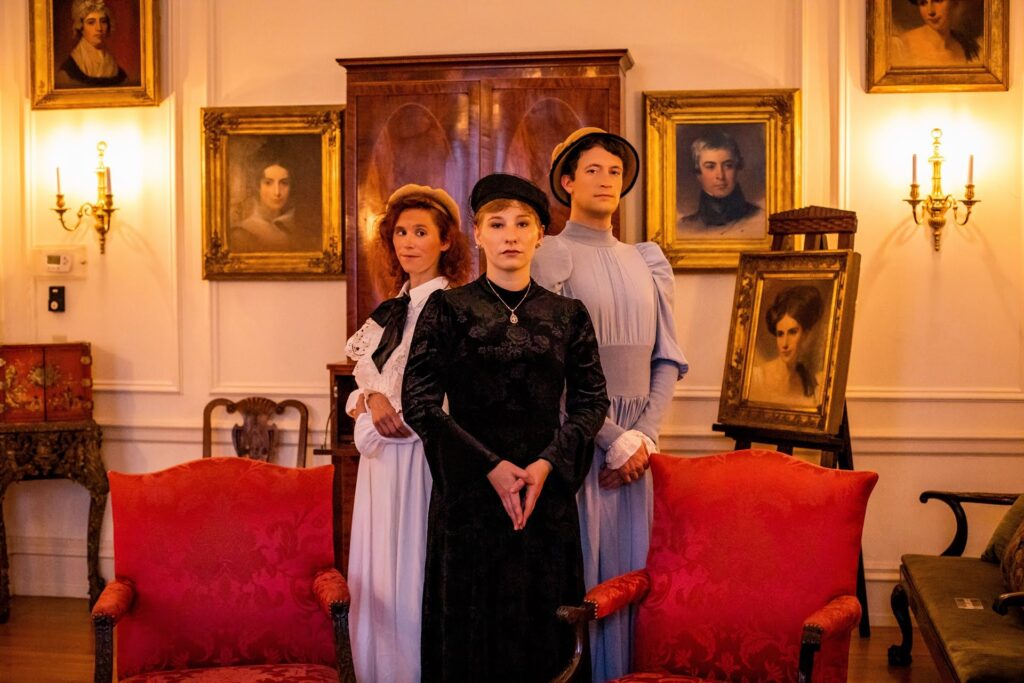 It had all started as a joke.

In 2019, Hedgerow Theatre, Curio Theater, and EgoPo Theater had, by pure coincidence, all chosen Anton Chekhov’s “Three Sisters” (or a variation thereon) as part of their season. Two of the productions even overlapped. So anytime someone asked me if I had anything planned for that year’s SoLow Fest (Philadelphia’s DIY theatre festival) I’d tell them, “I’m doing ‘Three Sisters’”, and they would laugh. It then struck me that it would be funny to actually do “Three Sisters” as a one-man play, and so I cracked open the play for the first time in my life, read the first couple pages, saw immediately that there were way too many characters onstage at once for my idea to be feasible, and promptly abandoned the idea.

But for some reason, it couldn’t quite abandon me.

Despite having never actually read the play in its entirety, the notion of doing it, in some form, continued to nag at me, rattling around the back of my skull until finally, months into the pandemic, I decided to look at “Three Sisters” again and see if there was any way that I could do it.
It’s at this point that I should backtrack a bit and explain exactly why the idea of my directing “Three Sisters” – to say nothing of my being in it as one of the titular sisters – should be so unlikely. Since 2014 I have been self-producing original work, and as of 2021 I have created seven original theatre pieces (or, less pretentiously, plays), plus an audio adaptation of “A Christmas Carol”. On all of these productions I wore many hats, acting as writer, director, performer, designer, costume designer, prop master, and when necessary, producer and stage manager. And all of these productions (with the exception of “A Christmas Carol”) were firmly rooted in the tradition of clown.

For those unfamiliar with the theatrical world the word “clown” likely conjures up images of, at best, birthday clowns, at worst serial killers. The form of clown in which I work and briefly studied does not involved face paint, fright wigs, balloon animals, or serial killing. “Clown” as I learned it from Emmanuelle Delpech comes from the Jacques Lecoq method. He’s well worth looking up if you have the time and inclination, but in short, “clown” really just means “visual/physical comedy”, comic characters and situations expressed primarily through physicality and actions rather than words. It’s about as far from Anton Chekhov as you’re likely to get. A turn of the century Russian playwright, Chekhov is sometimes referred to as the father of modern drama, a writer of tragedies most often associated with Constatin Stanislavski, the father (or grandfather) of “method acting”. “Three Sisters” follows the Prozorov sisters – Irina, Masha, and Olga – as they deal with the fallout of their father’s deathand the disastrous marriage of their brother and family heir Andrei to Natasha, a course domestic tyrant who cheats on her husband, mistreats the servants, and gradually but aggressively nudges Andrei’s siblings out of the family home. In the midst of all this Masha has an affair, Irina becomes caught in a deadly love triangle, and Olga has no choice but to keep them all together. Common sense would dictate that in tackling this, I would have to put the red noses and slapshoes away.

Except of course it’s not that simple. Clown wasn’t simply a lens I had chosen to filter my voice through; clown was the projector itself. I know no other way of expressing myself authentically onstage. Chekhov and I were going to have to meet in the middle. I worked to find opportunities to add subtle visual comedy, based on behavior, relationships, and body language rather than broad pratfalls, using comedy as a counterpoint to the drama without undermining it and also to help illustrate aspects of the characters and how they feel about one another that go otherwise unexpressed.

My first thought in adapting the play was with three actors, all playing multiple parts. This is how I came into the unlikely position of playing Olga, the oldest daughter. My initial thought is that I would play the major male roles, and of the three sisters I would take Olga because hers is the smallest part of the three. But as I attempted to adapt the script to this new form, three things happened. One was that I realized the “multiple parts” approach wasn’t going to work. There were too many roles, shifting in focus too often, which meant too many quick changes. The whole play would end up playing second fiddle to the farce of the actors trying to rapidly change parts. The second thing that happened was that I realized that the characters that interested me the most were the sisters. Where the play really seemed to come to life was any time they were onstage together, which oddly did not happen very often. I wanted that to change. I wanted to see the lives of and relationships between these three women, all dealing with life’s disappointments and adversities in their own ways, alternately supporting and at odds with one another. That was where the human element of the play really lived, and that was what interested me.

The third thing that happened was that I fell in love with Olga. I hadn’t given the character much thought at the outset, having seen her primarily as a logistical obligation, a part to be played out of necessity. But even as I found myself losing interest in the men I found myself more and more in tune with Olga. She was my age, at the same stage in her life, learning to live with the same disappointments. I related to her role within the family and to her attitude towards life, an almost disillusioned pragmatism coupled with an equally pragmatic cautious optimism. Rather eerily, the play begins one year after the passing of Olga’s father, and my own father passed away only a little over a year ago. Bear in mind that I had chosen to revisit this play without having read it or even knowing what it was about. Sometimes these things have a way of finding you. So strongly did I identify with Olga that I decided to keep the part for myself despite the change in plans, and I hope to do her justice.

For budgetary reasons it would be impossible to accurately replicate Russia in 1902, so I instead focused on a more general, early twentieth century aesthetic, one that mixed and matched styles of the 1900s, 1910s, and 1920s, while hopefully still feeling all of a piece. With casting I got very lucky. Leslie Miller, a longtime collaborator, was eager from the word go to take on Irina, a part I knew she’d be perfect for. More difficult was Masha. I needed someone with a background in clown who also had strong dramatic chops and was willing to dedicate her time to an unusual DIY venture and was also a good fit for the part. The only person I could think of who ticked all of these boxes was Bellisant Corcoran-Mathe, and fortunately she was available and interested. The three of us quickly bonded as a unit and found a special chemistry onstage.

The Rosenbach was the final piece of the puzzle, and to my great fortune they were extremely enthusiastic about the whole project, offering up space for performance and rehearsals and evidencing a refreshing eagerness to collaborate with us. I’ve never felt so welcome by a venue.

“Three Sisters” runs from September 9th through September 12th at the Rosenbach at 7:00 PM. I hope you will join us, and find these women and their story as moving, funny, touching, and powerful as I do. Buy tickets here.