James Joyce is said to have told his acquaintance, artist and writer Frank Budgen, that he wanted his novel Ulysses to “give a picture of Dublin so complete that if the city suddenly disappeared from the earth, it could be reconstructed from my book.” Devoted Joyceans and Ulysses fans seem to have taken this as a challenge: some of Dublin’s Bloomsday activities involve retracing the steps of Leopold Bloom and other characters, and numerous publications have explored the importance of the cityscape to the novel’s structure.

One striking example of the above comes from celebrated novelist Vladimir Nabokov, who taught Ulysses in his literature courses at Wellesley and Cornell. In an argument reproduced in his collected lectures, Lectures on Literature, Nabokov proposes that students of Joyce ignore the schema of Homeric allusions and concentrate instead on mapping out the movements of Leopold Bloom and Stephen Daedalus, particularly where they intersect. (Perhaps it’s worth pointing out that Joyce himself may have planted this seed; these literary giants met at an acquaintance’s dinner, and Joyce lamented his “whim” of using Homer’s Odyssey to structure the novel.)  Nabokov provided his students with the following sketch. Imagine being in that classroom… or at that dinner!

Meanwhile, in other classrooms: I’ve been attending one of our annual Ulysses Reading Groups to prepare for Bloomsday. Several meetings ago, one of my classmates brought in a printout of a Google map in which some studious user has placed pins for every chapter location. 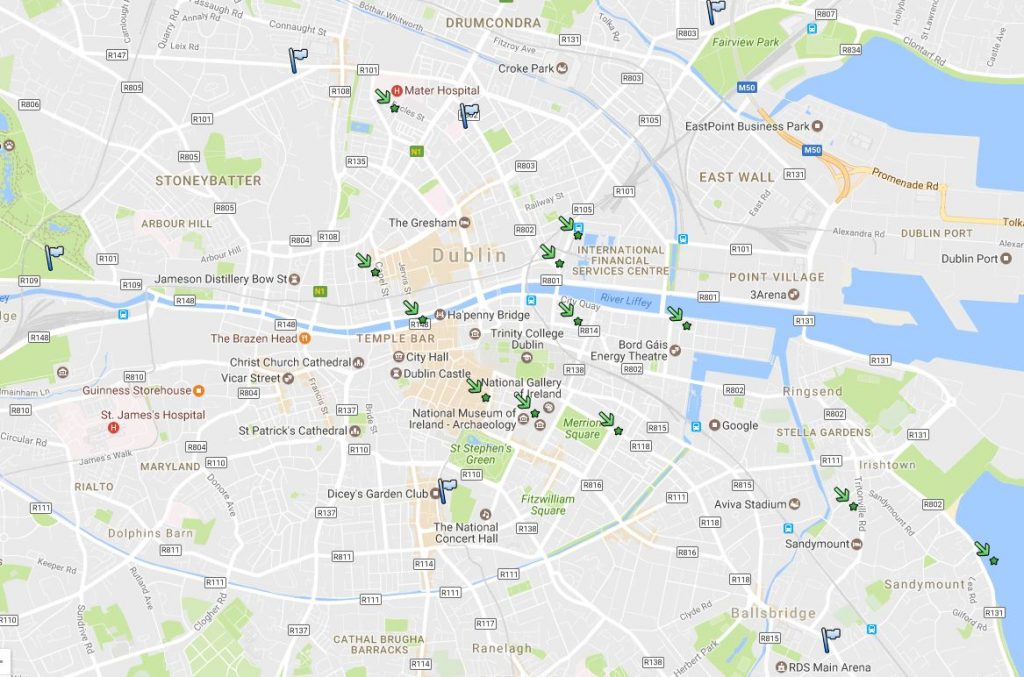 If you tilt your head and focus on those green arrows, you can see the resemblance to Nabokov’s pen sketch: the central cluster, the long arms out to the sea, a general sense of restlessness and motion.

Of course, if you want to follow Nabokov’s instructions to focus on the movements and intersections of Bloom and Daedalus, you can’t get a more direct and concise image than a transit map in the style of the London Underground:

It will be much easier to track down the characters of Ulysses during our own Bloomsday: all of our readings are conveniently located on Delancey Place this year. We’ll even post signage so our Delancey Place Dubliners have no trouble finding their way around. That metro map design seems like a good idea! 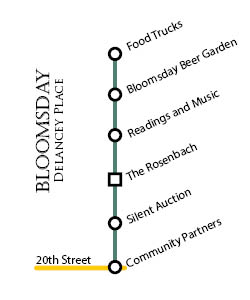 One thought on “Mapping Ulysses”