Famous and beloved Irish aria will be performed live on harp during The Rosenbach’s 2019 Bloomsday celebrations on Sunday, June 16.

“Where have I been wandering in my sleep? And what curious noise awoke me from its pleasant dream? Ah, Thaddeus, would you not like to know my dream? Well, I will tell it you.”

With those ethereal words, Arline, the main character of nineteenth-century Irish composer Michael W. Balfe’s opera The Bohemian Girl, begins one of the most beloved arias in the Irish operatic repertoire: “I Dreamt That I Dwelt in Marble Halls.” Familiar to the general public today through interpretations by respected artists including Dame Joan Sutherland, Enya, and Celtic Woman, the endearingly romantic piece of music is perhaps Balfe’s most important and lasting contribution to pop culture. Interestingly, James Joyce references Balfe himself, and “I Dreamt That I Dwelt in Marble Halls” in particular, in several of his famous works. Fittingly, The Rosenbach will explore the importance of this musical heritage during its 2019 Bloomsday celebrations by offering live harp performances of the piece inside its own “marble halls”–the historic Rosenbach mansion at 2010 Delancey Place. The performances will be accompanied by a small display of books and manuscripts connected to the music, and its resonance in Joyce’s books.

Michael William Balfe (1808-1870) is not an especially familiar name today, even among opera lovers, but The Bohemian Girl was immensely famous and successful in the mid-1800s when it premiered. It had its Philadelphia debut in 1844. Like many operas of its day, Balfe’s work tells a fantastical tale of love and adventure. The story was inspired by a work of Miguel de Cervantes titled La Gitanilla (The Gypsy Girl). (The Rosenbach owns a first edition of Cervantes’ Novelas Exemplares, published in Madrid in 1613, which includes La Gitanilla. The volume is in its original vellum binding.) James Joyce references the opera and this piece of music in Dubliners and Finnegans Wake.

Sung by the young Arline, the opera’s main character, “I Dreamt That I Dwelt in Marble Halls” recounts scenes from the noblewoman’s almost-forgotten childhood in the home of her father, a count, and the love she feels for her suitor Thaddeus.  Years before, Thaddeus had saved Arline from a wild animal attack before the young maid was kidnapped and taken from her father’s home.  The aria recounts a dream that actually consisted of memories from Arline’s nearly-forgotten youth:

I dreamt that I dwelt in marble halls,
With vassals and serfs at my side
And of all who assembled within those walls,
That I was the hope and the pride.

I had riches all too great to count, could boast
Of a high ancestral name,
But I also dreamt, which pleas’d me most,
That you lov’d me still the same… 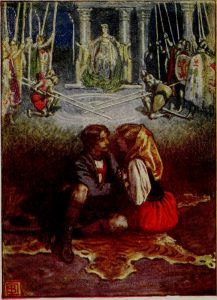 The Harp in Celtic Culture

It is appropriate to hear “I Dreamt That I Dwelt in Marble Halls” on harp because of that instrument’s longstanding connection to Irish culture.  For centuries, the harp has been closely associated with Celtic folkways in Ireland, Scotland, Wales, and Brittany (northern France).  It is a national symbol of Ireland today.

According to Eugene O’Curry’s book On the Manners and Customs of the Ancient Irish (1873), the Celts believed harp could evoke a wide array of emotions, including joy, sorrow, and a meditative state of mind.  “In no country in Europe, at least I believe so, is the antiquity and influence of the harp thrown so far back into the darker regions of history as in Erinn,” O’Curry writes.  Harp indeed has an ancient history on the island and is surrounded in myth and legend; the ancient Irish king Brian Boru is said to have played on an instrument that still survives today.  The harp found popularity in Europe and America as a female parlor instrument in the 18th and 19th centuries; France’s famous Queen Marie Antoinette played it.  Today, the harp is beloved by those who enjoy classical music, as well as devotees of the folk music of Ireland and elsewhere around the world. 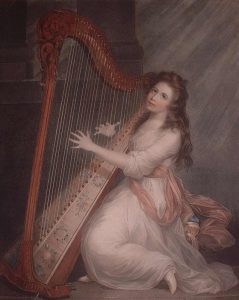 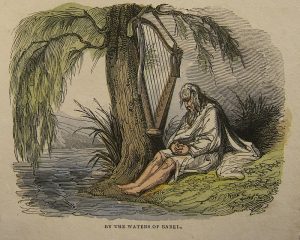 George Cruikshank, “By the Waters of Babel,” London, 1825. Rosenbach accession no. 1954.1880.1814. The harp has important biblical resonances. Perhaps most famously, King David of Israel played harp. This Cruikshank illustration was inspired by Psalm 137, a lamentation of the Jewish people during the Babylonian Captivity: “By the rivers of Babylon we sat and wept when we remembered Zion. There on the poplars we hung our harps…”

Bloomsday Performance of “I Dreamt That I Dwelt in Marble Halls”

Between 1 p.m. and 4 p.m. on Bloomsday, Sunday, June 16, a Celtic harpist will perform “I Dreamt That I Dwelt in Marble Halls” and a selection of other well-known Celtic tunes live in the central stair hall of The Rosenbach as part of the Joyce-themed festivities.  Not only will visitors have the opportunity to listen to the romantic aria performed on Ireland’s beloved musical instrument, but after hearing the piece, they can venture up to the Rosenbach’s second-floor Program Gallery to see historic sheet music of the aria from the Free Library of Philadelphia’s collection, along with references to the work, the composer, music, and memory in manuscripts and important editions of James Joyce’s Ulysses and Dubliners.  The harpist will also be available to share a 1902 score of The Bohemian Girl from the Free Library collection with visitors and answer questions about the harp’s millennium-long resonance with Celtic culture and the instrument’s musical qualities. 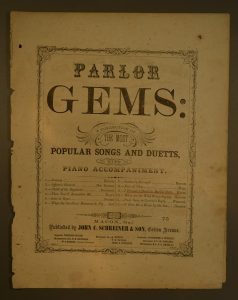 Michael William Balfe (1808-1870), “I Dreamt That I Dwelt in Marble Halls,” Parlor Gems: A Collection of the Most Popular Songs and Duetts, with Piano Accompaniment (Macon, GA: John C. Schreiner [186-]), Free Library of Philadelphia Sheet Music Collection 9293 (Parlor Gems, 9). This object is on display at The Rosenbach through August 2019. 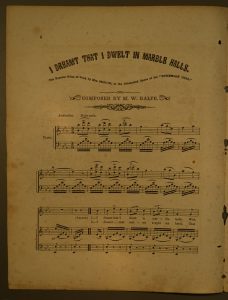 Michael William Balfe (1808-1870), “I Dreamt That I Dwelt in Marble Halls,” Parlor Gems: A Collection of the Most Popular Songs and Duetts, with Piano Accompaniment (Macon, GA: John C. Schreiner [186-]), Free Library of Philadelphia Sheet Music Collection 9293 (Parlor Gems, 9). This object is on display at The Rosenbach through August 2019.

On Bloomsday, the “marble halls” of The Rosenbach will resound with the strains of a nineteenth-century opera familiar to James Joyce and his contemporaries, in honor of a rich Celtic musical and literary heritage enjoyed around the world today.  Join us for this unique celebration of Irish culture at one of Philadelphia’s premier destinations for book lovers!

To learn more about The Rosenbach’s Bloomsday celebration, click here.

To learn more about the Free Library of Philadelphia Music Department, click here.

To learn more about Marie Antoinette, attend the brand-new Rosenbach Hands-On Tour “Yaass Queen: Royal Relics at The Rosenbach,” to be premiered in the fall.  Check our website for more details later in the summer!