The Rosenbach was delighted to have writer/actor/director Mark Gatiss visit in June to shoot scenes for his In Search of Dracula documentary, which was just released on the BBC. Along with Stephen Moffat, Gatiss created a new adaptation of Bram Stoker’s Dracula which aired on the BBC over the first three days of the new year (and is now available on Netflix). Gatiss has had a long association with Moffat, writing several Doctor Who episodes and most notably, the two created the Sherlock series starring Benedict Cumberbatch and Martin Freeman. 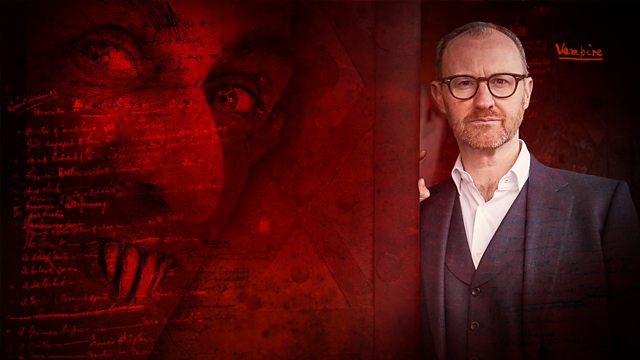 To accompany the new Dracula, Gatiss wanted to explore the roots of the character and also look at how the vampire has developed over the years on film.  And if you want to know how it all started, you must consult Bram Stoker’s Notes for the novel which are housed at The Rosenbach. Stoker researched and wrote Dracula over at least seven years, finally publishing it in 1897, and his extensive handwritten notes, ideas, outlines, character lists, plot summaries changed over the course of the novel’s development.  Gatiss wanted to see this development and learn how Stoker first came to create one of the icons of literature, the vampire, Count Dracula.  Gatiss’ delight in handling the notes and the secrets they yield are clearly apparent in the documentary.  His visit lasted just one afternoon, as he was due to shoot scenes at Orava Castle in Slovakia the following day. Orava was used in the 1922 unauthorized silent film version of Dracula, Nosferatu, and the castle is also featured in the new Dracula adaptation.

Of course, as one of the creators of Sherlock, Gatiss was also very interested in The Rosenbach’s Arthur Conan Doyle holdings.  While waiting for the filming to begin, Gatiss pored over the manuscript of the Sherlock Holmes story, “The Empty House.” As he has been with all who’ve asked, he was non-committal about any new Sherlock episodes, but did ask, “which story would we like to see filmed.”  He did share in June that he was working on a new M.R. James Ghost Story for Christmas episode, which aired on the BBC on Christmas Day. Gatiss has been instrumental in continuing the British tradition of telling scary stories during the Christmas season.

Many scholars have come to The Rosenbach to study Stoker’s Notes over the years and we have held many exhibitions and programs featuring them. It was a delightful treat to also be part of this latest Dracula adaptation.

While In Search of Dracula is available to view on the BBC, there is no date set yet for its American market release.