The Rosenbach is the home of Bram Stoker’s Notes for Dracula, over 100 pages of outlines, early plot ideas, and research notes, compiled by the author over the seven years he developed and wrote the book. Content of these Notes will be featured in our conversations every week. 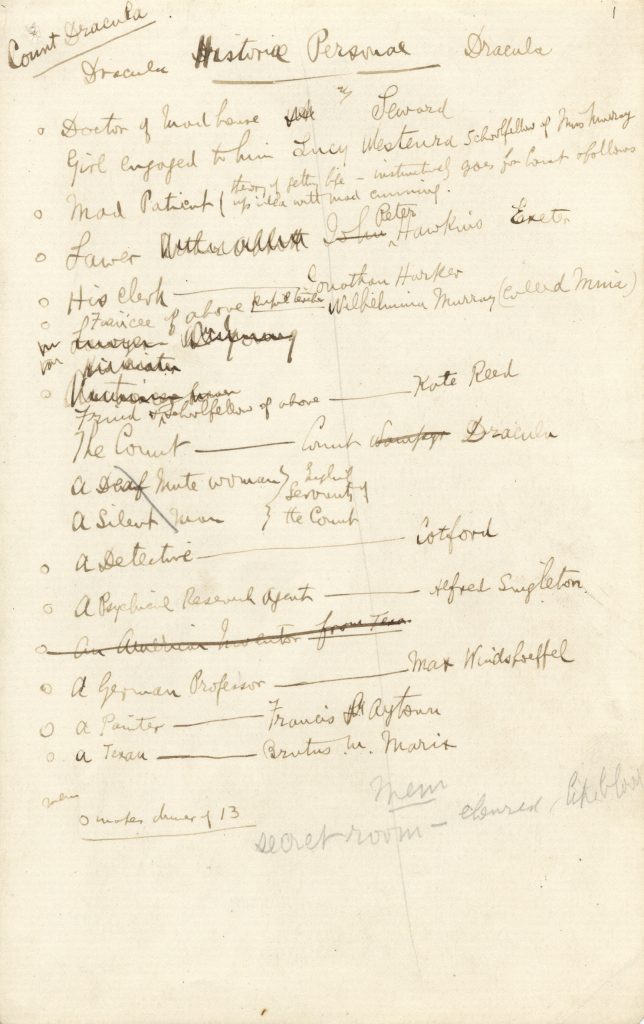 These Notes provide an extraordinary look at the conception and development of one of the great monster stories of the 19th Century. Throughout the Notes, Stoker is constantly revising his list of characters. One of his more complete early lists is headed “Historiae Personae” (Characters of the Story), on which he has written “Dracula” three times across the top and also changed the name of his character, “Count Vampyr,” to “Count Dracula.” Because really, your vampire was going to be called Count Vampyr?

We’ll be talking about Chapter One in our first show, which is an entry from Jonathan Harker’s Journal dated May 3. Jonathan is travelling to meet Count Dracula in Transylvania. The Count is purchasing property in London and Jonathan is a solicitor sent by his firm to finalize the contractual details. Jonathan is bewildered by the superstitious customs of the people and mystified by what he witnesses on his way to the castle.

Stoker wastes no time in bringing the reader into this foreign world with Jonathan and the immediacy of using journal entries makes it all the more compelling, as we experience what Jonathan does, every step of the way.

How does the opening of the story make you feel? What are your thoughts as Jonathan recounts his experiences with the people of Transylvania and also the weird and spooky carriage-ride-from-hell journey to Dracula’s castle?