I’ll admit it. Not only am I a tea fanatic, I will try a tea just because the name is cool—even if I don’t expect to like it. Green tea is not my favorite—I think it tastes like a grass stain—but I’ve brought home Dragon Well and Gunpowder in hopes that drinking them would make me feel like Bruce Li, or Blackbeard. 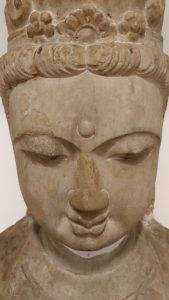 You feel more merciful just seeing her, don’t you? The Rosenbach’s Guanyin hails from Northern China (or Southern Manchuria), is a thousand years old, and lost her head at one point—as you see from the tastefully repaired scar at her throat. Guanyin is a bodhisattva, which my beginner–Buddhist mind understands as a being who has completed her cycles of reincarnation, but delays her blissful reunion with infinity to help the rest of us scale the heights of existence. We all know people who seem too wise and good to be mortal—Eleanor Roosevelt, Mr. Rogers, and Oprah spring to mind—so I can’t help but suspect that bodhisattvas walk among us.

The tea Guanyin gives her name to, Iron Goddess of Mercy, is sweet and flavorful and has a silky texture. Because it’s an oolong, and doesn’t have as much caffeine as a black tea, and because I only find it seasonally, it’s been a while since I had Tieguanyin. On Saturday I went in search of a cup, and found it in Reading Terminal Market, at Tea Leaf. The staff made me a cup of Iron Goddess as good as the Tieguanyin I remember. Because there are multiple legends explaining how Iron Goddess of Mercy got its name, I asked the staff which they thought was most plausible.

They weren’t sure. But here’s what I’ve heard: Long ago, a poor laborer passed a rundown temple to Guanyin on his way home from work each day. Little by little the laborer cleaned and repaired it, and would conclude his visits by drinking a cup of tea before the iron statue of the bodhisattva. To thank him for tending her sanctuary, Guanyin inspired the laborer to explore behind her temple. There, he found a tea plant that yielded a particularly fine variety of tea—her gift to him, his friends, family, and neighbors.

And me! The final leg in my journey to understand Guanyin led me to the Asian Art galleries of the Philadelphia Museum of Art, which has Guanyins of jade, bronze, stoneware, porcelain, willow, linden, and ink. My favorite was a male Guanyin.  Before her fame spread from India to China, Guanyin was known as a male deity by the name of Avalokiteshvara. Like its variant Guanyin, the etymology of Avalokiteshvara’s name suggests that he tunes in to the cries of all who suffer, and looks out for them. The warmhearted and agreeably polymorphous nature of Guanyin/Avalokiteshvara makes her, among many other things, a fitting deity of tea. If you are interested in learning more about the history and lore of tea, a new Rosenbach exhibition, Off the Shelf… Game on! contains a case of objects for serving tea, and is open now.

One thought on “Tea at The Rosenbach: Goddess of Mercy”