This week we are lucky to have a guest post from Rebecca N. Mitchell, an Oscar Wilde scholar who visited the Rosenbach recently to do research in the records of the Rosenbach Company.

As libraries begin to digitize print catalogues and finding aids, it
is no wonder that archival materials long thought to be missing are
brought into the spotlight anew: while these works were certainly never
lost to their archivists and librarians, the sheer volume of material
held in collections worldwide means it is relatively easy for the works
of even well-known figures to sit “undiscovered” by scholars in university
archives and special collections. Such is the case of three
manuscripts by Oscar Wilde, held in the Free Library of Philadelphia and brought once again to public attention in the Rosenbach’s current exhibition, “Everything is Going On Brilliantly: Oscar Wilde and
Philadelphia.”

Another of Wilde’s important manuscripts also sat unnoticed for
decades, hidden in plain sight in the Special Collections Library at the
University of Akron: the fair copy of Wilde’s “The Decay of Lying,”
which he called in De Profundis the “first and best of all [his]
dialogues.”1 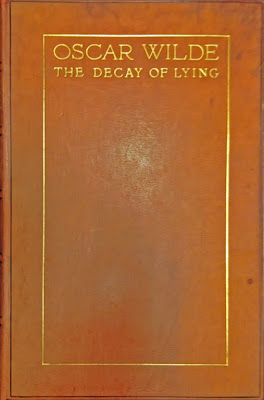 The manuscript was given to the library in 1962 as part of
the collection of patron Herman Muehlstein, a rubber magnate with
extensive ties to the school.2 It remained there undisturbed, while scholars thought it was “destroyed or (more likely)…in private hands.”3 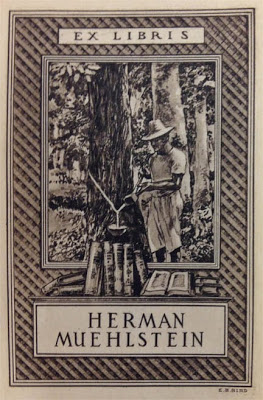 Herman Muehlstein’s bookplate in fair copy manuscript of Oscar Wilde’s “The Decay of Lying”; PR5818.D43 1889, Special Collections, University of Akron Library. Reproduced with permission.
Prior to reaching its stable home in Akron, the manuscript had a rollicking
history that tells us much about the vast fluctuations of the
bookseller’s market—and Wilde’s relative position within the literary
marketplace—in the first half of the twentieth century. In this tale,
Dr. A. S. W. Rosenbach played a key role, with the manuscript coming
into his possession a number of times, and sales records at the
Rosenbach proved instrumental in illuminating part of this
document’s fascinating provenance. 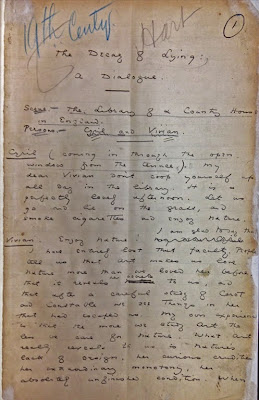 Folio 1 of fair copy manuscript of Oscar Wilde’s “The Decay of Lying”; PR5818.D43 1889, Special Collections, University of Akron Library. Thanks to Merlin Holland for permission to reproduce this image.The manuscript, which served as the copy text for the essay’s original 1889 publication in the
Nineteenth Century and bears the typesetters’ marks from the journal,
was originally given by Wilde to Frank Richardson, a novelist who met
his own untimely death. In 1910, Sotheby, Wilkinson, and Hodge included
the manuscript in a sale of “books and manuscripts,” where it was
purchased by London bookseller J. Hornstein for £111. It next appears
on the auction block at the 1920 sale of John B. Stetson, Jr.’s
extensive collection of Wilde’s works. The Anderson Galleries’
catalogue for Stetson’s collection contains noteworthy details about the
manuscript, including a description of the binding: “Written on 55 pp
folio, and mounted with inner guards in book form, full blue morocco
covers, and preserved in a lined cloth case.”4

At the sale, Dr.
Rosenbach paid $1525 to purchase the “Decay of Lying,” along with an
array of letters and other manuscripts.5 Many of these items—fifty-one
of Rosenbach’s purchases at the auction, in fact—were destined for
Colonel H. D. Hughes, as is clear from the extensive listing in
Rosenbach’s sales records (RCo VIId:15, p. 162-63 [23
April 1920]). Hughes, a collector from Pennsylvania, curiously paid off
his sizable balance primarily through daily installments of $100.00.

The sale of the “Decay” manuscript to Col. Hughes was not the last
time that Rosenbach would handle the work. Just four years after the
Stetson sale, the document again appeared on the auction block when,
following the Colonel’s death, much of his collection was sold by the
Anderson Galleries. Still bound in blue morocco, the manuscript is also
noted as retaining the bookplate “from the J. B. Stetson, Jr.
collection.”6 At the auction, Rosenbach purchased the manuscript for
$625, quite the bargain compared to its previous price. (The New York
Times recorded an erroneous sales figure of $525, though they noted
correctly that the manuscript was purchased by the Rosenbach Company.7)
Dr. Rosenbach would make a tidy sum on the resale: in 1930, he sold the
fair copy of “Decay” to Comte Alain de Suzannet, a collector of British
manuscripts with a particular passion for Dickens, for $4850 (Rosenbach
Library VIId:22, p. 141).

Suzannet maintained a lively
correspondence with Rosenbach, and the firm routinely offered him choice
works by Dickens and Thackery, among other writers. The good humor that
underscored their relationship was called upon when in 1933, Wilde’s
“Decay of Lying” manuscript (which Suzannet already owned) appeared in the Rosenbach catalogue for sale
at $3400.8 Including price information seems to have been a rare move
for the bookseller, which—according to the New York Times—was regarded
“with a little awe, as being something too immaculate and refined to
descend to the vulgar level of mentioning money.”9

Suzannet did not fail
to notice the presence of the manuscript or its price when Rosenbach sent him a copy of the catalogue; he
wrote to Rosenbach salesman Harry Hymes in response that the catalogue
presented “a feast spread out for hungry (but poor) men, who can only
enjoy these good things through a plate-glass window!” (ALS 20 March 1933, RCo I:167:10). Suzannet asked to purchase a few items
by Kipling at a discount before noting, “that 338 [Wilde’s “Decay of
Lying” manuscript] is priced $3400. As I had the pleasure of purchasing
this same ms. from you three years ago for $4750, are you crediting my
account with the balance? In that case I would not bargain for the
Kipling items.” (Suzannet underestimated the actual price he paid by
$100.) 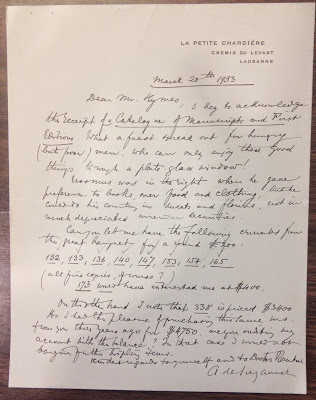 Comte Alain de Suzannet, autograph letter signed to Harry Hymes.20 March 1933. RCo I:167:10, Rosenbach of the Free Library of PhiladelphiaDr. Rosenbach was apparently concerned enough to respond to
Suzannet directly: “I wish to apologize to you personally for the error
relative to Oscar Wilde’s ‘Decay of Lying.’ By mistake it was included
in the catalogue and, of course, the mark-down was on that as well as
all the books and manuscripts in stock” (ALS 4 April 1933, RCo I:167:10). Perhaps as a consolation, Suzannet did
receive a small discount on his Kipling order.

Suzannet’s
collecting turned increasingly to Dickens’s writing,10 and in March 1934
he offered a number of (non-Dickensian) works from his collection at a
Sotheby’s auction; there, the “Decay of Lying” manuscript sold for the
astonishingly low price of £45.11 In 1935, the price of the manuscript
was again on the rise, advertised by Maggs Bros. for £250.11Back
to auction it went in 1937, when the “Decay” manuscript—now rebound in
“full russia by Sangorski & Sutcliffe”—was purchased by Retz &
Storm for $975.13 The manuscript remains in this russia binding today,
preserved in excellent condition in Akron, apparently never again reaching the high prices it saw under Rosenbach’s care.

9 “Notes on Rare Books,” New York Times 9 April 1922, p.BR20. The New York Times noted that “Only the barest details” of the books were described, and thought that “the question as to whether high-priced manuscripts can be sold by means of a check-list such as this is highly speculative.” ↩

11Sotheby’s, Manuscripts, Autograph Letters and Printed Books Forming part of the Library of the Comte de Suzannet, La Petite Chardière, Lausanne, March 1934 (London: Sotheby’s, 1934), p. 39, lot #256. The Grolier Club’s copy indicates the ms. was purchased by “Mayes.” The auction catalogue includes a reproduction of the final page of the manuscript, which confirms that this version is the same sold by Rosenbach in 1933; the binding is still listed as “blue leather.” The sales price of £45 is confirmed in the Times Literary Supplement (“Notes on Sales,” 5 April 1934, p. 248) and British Books/The Publisher’s Circular (1934, p. 539). ↩

Many thanks to Lauren Wayne for her excellent post on creating footnotes in Blogger.
Dr. Mitchell is Lecturer in Victorian Literature at the University of Birmingham (UK). Her most recent book, Oscar Wilde’s Chatterton: Literary History, Romanticism, and the Art of Forgery, co-authored with Joseph Bristow, is forthcoming from Yale University Press. She and Professor Bristow are presently at work on a longer piece on Wilde’s “The Decay of Lying.”