The 2022 Rosenbacchanal (Thursday, May 12) will feature a unique harp and organ recital titled “The Muses’ Concord: Musical, Literary, and Historical Jewels from The Rosenbach’s Collection.”  Each of the precious musical gems selected for performance at the event relates to one of The Rosenbach’s areas of collecting strengths.  The program below presents the glittering array of musical pieces selected for performance, along with items from the collection to which the pieces connect.

If the organ is, in the words of Wolfgang Amadeus Mozart, “the king of instruments,” then the harp is surely his radiant queen.

The pipe organ astounds with the range and power of its tones, while the soothing quality of harp belies the robustness of its sound. While not a common pairing on the recital stage, the two instruments complement each other perfectly in tonight’s elegant domestic setting.

At The Rosenbach, the arts and humanities converge, just as harp and organ do this evening: in a serenade of splendor. This recital celebrates interdisciplinary experiences with a carefully curated set of musical pieces connected to objects in The Rosenbach collection. Enjoy this sonorous journey into The Rosenbach’s holdings of rare books, manuscripts, and artworks.

Part I: Medieval and Early-modern Beginnings

“The daily prayer of all true collectors should begin with the words, ‘beauty, rarity, condition,’ and last of all, ‘antiquity.’  But books differ from other antiques in that their ultimate value depends upon the intrinsic merit of the writer’s work. A first edition of Shakespeare, for instance, will always command an ever-increasing price. The same is true of first editions of Dante, Cervantes, or Goethe.  These writers gave something to the world and to life—something of which one can always be sure.”

Part II: “A Commerce with the Muses”: (Not So) Famous Firsts in The Rosenbach’s Collection

“A Commerce with the Muses was supported amid the trivial and momentary interruptions of a shop; the Poets were studied, and even imitated with some success; — two pieces were constructed for the stage; — the Theory of Music was discussed, published, and dedicated to the Princess Royal; — and painting was so much within the circle of Ignatius Sancho’s judgement and criticism, that several artists paid great deference to his opinion.”

Collections connection: Zionitischer Weyrauchs-Hügel of 1739, printed at the Ephrata community of Seventh-day Baptists

Ignatius Sancho, L’Homme et La Femme. Harp and organ.
A country dance by one of the first known published composers of African descent in Great Britain and first known person of African descent to vote in a British parliamentary election.
Published in Minuets Cotillons & Country Dances for the Violin, Mandolin, German Flute, & Harpsichord. Composed by an African. London: Printed for the author, 1775. Arranged for harp and organ by Dr. Alexander Lawrence Ames.
Collection connection: Ignatius Sancho (1729–1780), Letters of the Late Ignatius Sancho, An African, to which are Prefixed, Memoirs of his Life, by Joseph Jekyll, Esq. M.P. London: William Sancho, 1803. EL2 .S211l 803.

“To speak in the poetical language of my country, the seat of the Celtic Muse is in the mist of the secret and solitary hill, and her voice in the murmur of the mountain stream. He who woos her must love the barren rock more than the fertile valley, and the solitude of the desert better than the festivity of the hall. … A few irregular strains introduced a prelude of a wild and peculiar tone, which harmonised well with the distant waterfall, and the soft sigh of the evening breeze in the rustling leaves of an aspen, which overhung the seat of the fair harpress.”

Robert Burns, “My Heart’s in the Highlands” and “My Love is Like a Red, Red Rose.”  Solo harp.
Based on arrangements in Sylvia Woods, 52 Scottish Songs for All Harps (Princeville, HI: Sylvia Woods Harp Cenber, 1997).  Arranged by Dr. Alexander Lawrence Ames.
Collection connections: Robert Burns, Poems, Chiefly in the Scottish Dialect… Call no. EL2 .B967 793.  Also, Marianne Moore holding a rose in a garden, Claremont, California, 1956. Moore XII:20:11a. XII:20:11a,b with envelope from Claremont postmarked Dec 20 1956.

“Yes, the newspapers were right: snow was general all over Ireland. It was falling on every part of the dark central plain, on the treeless hills, falling softly upon the Bog of Allen and, farther westward, softly falling into the dark mutinous Shannon waves. It was falling, too, upon every part of the lonely churchyard on the hill where Michael Furey lay buried. It lay thickly drifted on the crooked crosses and headstones, on the spears of the little gate, on the barren thorns. His soul swooned slowly as he heard the snow falling faintly through the universe and faintly falling, like the descent of their last end, upon all the living and the dead.” 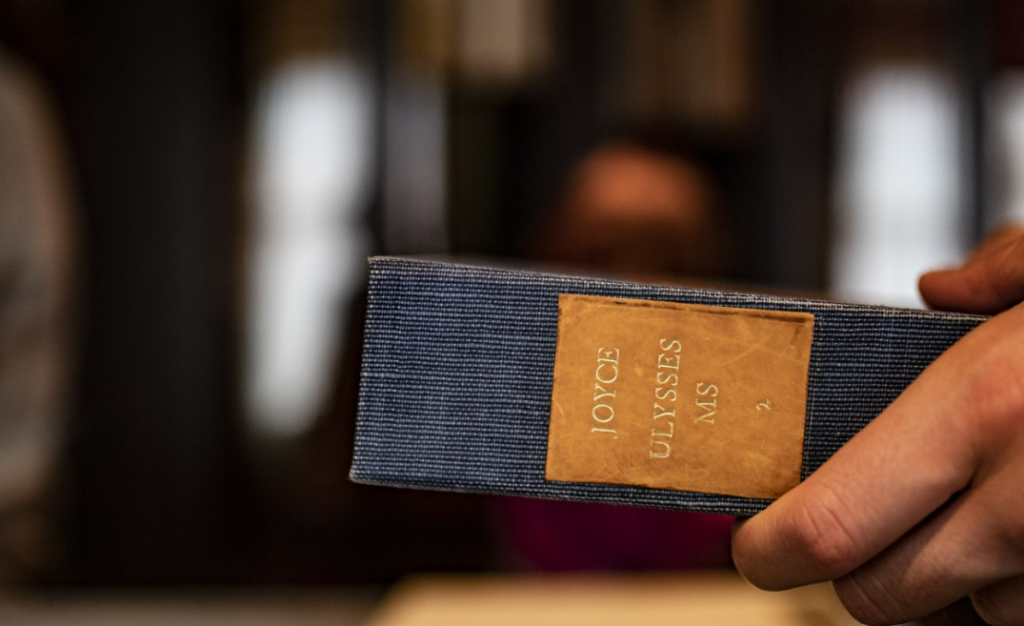