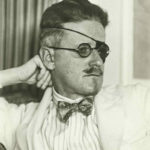 February 2, 2022, will mark the centennial of the publication of James Joyce’s masterpiece Ulysses. Constructed as a modern parallel to Homer’s Odyssey, Ulysses takes place over the course of a single day in Dublin, Ireland, on June 16, 1904. While it is regarded as one of the finest works of Irish literature, the manuscript for Ulysses has resided right here at The Rosenbach Museum and Library in Philadelphia since 1924.

Before its full publication, portions of Ulysses were circulated in installments in The Little Review, an American literary magazine, in 1918. Shortly after, the contents of Joyce’s work got the magazine prosecuted for obscenity, the publishers arrested, and Ulysses officially banned in the United States. After that, Joyce had no hope of finding another publisher in the English-speaking world but Sylvia Beach, an American expatriate who ran the Shakespeare and Company bookshop in Paris, where Joyce was then living, agreed to take on the project and the first complete edition was published.

The publication date of Ulysses is anything but incidental. Joyce painstakingly engineered the date to coincide with his 40th birthday on February 2, 1922 (2/2/22). Ever superstitious, Joyce was obsessed with the promised luck of publication on his own important anniversary, along with the date’s cosmic repetition.

Shortly before the full publication, Joyce found himself in financial trouble. John Quinn, an Irish American Lawyer living in New York and a financial backer of The Little Review, offered to buy the manuscript from Joyce as a way of subsidizing the work. Quinn was a significant collector and had a long practice of buying manuscripts from authors as a form of patronage. In 1923-1924, Quinn liquidated his collections at auction where The Rosenbach’s founder Dr. A.S.W. Rosenbach purchased the manuscript for the comparatively small sum on $1,975. The manuscript has resided in Philadelphia ever since, despite objection  by the author himself.

Unhappy with his manuscript’s low fetching price, Joyce asked to buy it back from Rosenbach for the same price he paid. Rosenbach, who had purchased it for his personal collection, refused, but offered instead to purchase the corrected page proofs for Ulysses. Joyce never responded to Rosenbach, but in May 1924 wrote to his patron Harriet Shaw Weaver, noting that “when he receives a response from me all the rosy brooks [“Rosenbachs,” as translated in the company’s cable address, ROSEBROOK, that Joyce clearly noted] will have run dry.” With that, Joyce enclosed one of his famous rhymes:

Rosy Brook he bought a book
Though he didn’t know how to spell it.
Such is the lure of literature
To the lad who can buy it and sell it.

A century after our founder’s contentious purchase, Joyce’s Ulysses is as relevant as ever.  The Rosenbach’s Librarian Elizabeth Fuller, who has been working closely with the manuscript for nearly 30 years, sums up the novel’s enduring appeal, “As far as Joyce was concerned, life, just as it is, with all its flaws and ugliness, as well as all its goodness and optimism, is fit material for art.” The ongoing appeal of Ulysses is no more apparent than on Bloomsday, a literary holiday celebrated every year on June 16th to mark Joyce’s fabled day. Named after Leopold Bloom, one of the central characters, nowhere in the United States is Bloomsday celebrated quite like the manuscript’s home at The Rosenbach. Each year, portions of the manuscript are on view for the more than 1,000 people who join us on our closed-off street for a day-long festival of readings, songs, and bibliophilic delight.

Each year, portions of the manuscript are on view for the more than 1,000 people who join us on our closed-off street for a day-long festival of readings, songs, and bibliophilic delight. After two years’ hiatus due to the pandemic, the live, in-person Bloomsday festival is returning on June 16, 2022 – just in time for the publication’s centennial anniversary. This year, members of the public will be able to enter a raffle to win a coveted reader spot at this year’s festival. Learn more at rosenbach.org/bloomsday. 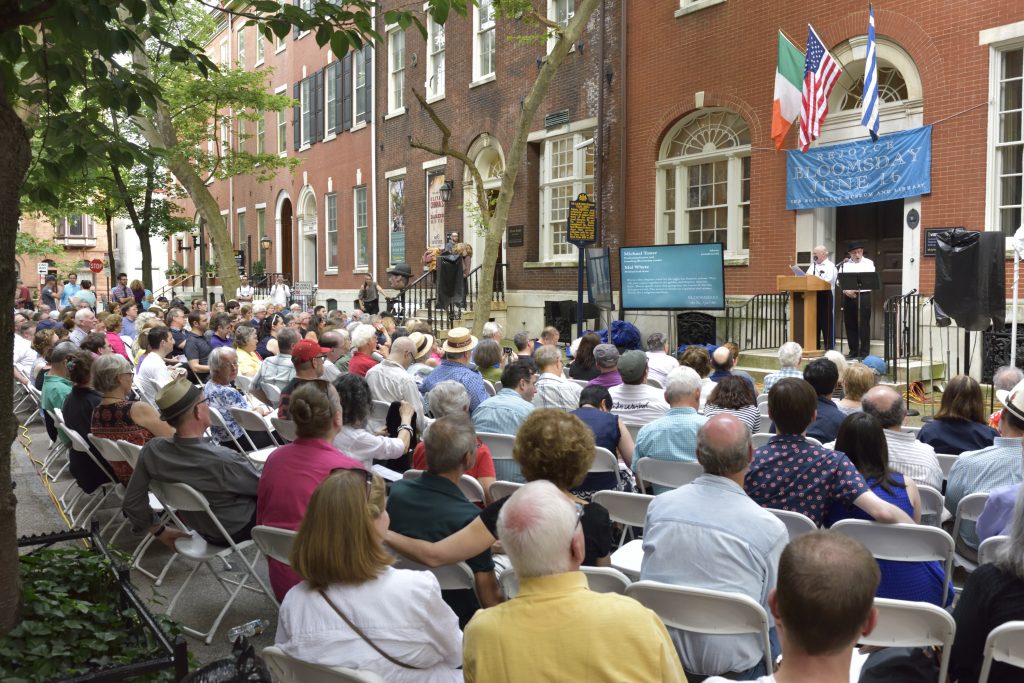 Alongside the festival, The Rosenbach is debuting a new exhibition, 18 Reasons to Read Ulysses: A Centennial Celebration. Inspired by the novel’s 18 episodes, the exhibition challenges Ulysses’s reputation as a difficult book to read, presenting eighteen highlights from the manuscript, each representing a single theme—along with related objects from The Rosenbach’s collections.  More information to be announced soon.