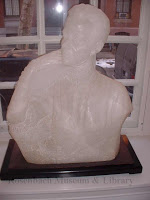 Sitting in the bay window of the Rosenbach Museum & Library is an alabaster bust of Rita De Acosta Lydig by artist Malvina Hoffman. Hoffman’s sculpture is particularly striking not only in her choice of subject matter but also in her choice of stone. On certain afternoons it glows.
The Rosenbach has more than one Hoffman sculpture, there is another of author John Keats in terra cotta in the library. Hoffman was a prolific artist, the Chicago Field Museum alone has over 100 of her sculptures. The majority of her work is in bronze, plaster, terra cotta, or marble, with the exception of this bust of Rita Lydig and one of Sri Ramakrishna which are both in alabaster.

I’m not sure as to what kinds of conclusions or connections we can make about Hoffman’s relationships with or views of these two sitters. Sri Ramakrishna spent the entirety of his life in contemplation of God and Rita de Acosta Lydig in contemplation of fashion.

Rita de Costa Lydig’s younger sister Mercedes de Acosta gave the Metropolitan Museum of Art many of her sister’s fine collection of clothing including several pairs of her custom made shoes.

Which also reminds me of another shoe queen: 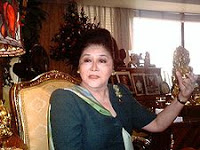 2 thoughts on “The Woman on a Pedestal: Rita de Acosta Lydig”