The Rosenbach collection has numerous connections with the Abbey Theatre in Dublin, Ireland. Our library houses some manuscripts of poems by William Butler Yeats, who was a co-founder of the Abbey Theatre. Yeats became close to an Irish-American lawyer and arts patron, John Quinn, who was the defense lawyer in the obscenity trial over the publication of James Joyce’s Ulysses in The Little Review. Speaking of obscenity, in 1928 the Abbey Theatre staged the first Irish production of Oscar Wilde’s Salomé, which was at the time was banned from the London stage; our collection includes an autograph manuscript of this controversial play.

So of course when we heard that a touring troupe from the Abbey Theatre would be performing The Plough and the Stars here in Philadelphia, we invited them to visit our library and see some of the theatrical highlights and Irish literary treasures of our collection. ﻿﻿

The first thing the troupe noticed when we entered the library was the series of architectural models which rest on top of the bookshelves: they immediately recognized the Globe Theater in miniature, and were interested to learn that the rest of the models replicated other scenes from Shakespeare’s life, such as the house where he was born. From there the tour naturally moved to exploring some of our Shakespeare editions. In the above photo, we are comparing two different versions of Macbeth: one third folio from 1664 and one Restoration-era revision which cleaned up quite a bit of the language. Our visitors were amused to see that the 1674 version included new songs (“As opposed to all the old songs?” one joked), and we were treated to a Scottish professional actor’s reading of the Scottish play in both forms.

You can see some of our Shakespeare editions and revisions on our Shaping Shakespeare Hands-On Tour; the next one takes place on November 6. 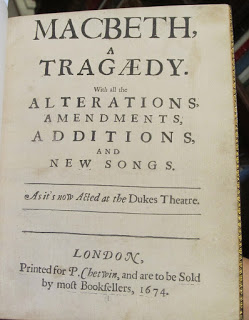 While on the subject of plays, we looked at the French manuscript of Salomé. There is something incredible about seeing the handwriting of authors you love and admire; perhaps it’s the rarity of seeing a unique, original document from a previous century, or perhaps the physical trace of pen or pencil makes us feel closer to the process of creation. In any case, our guests were very excited to see the manuscript, and pronounced Oscar Wilde’s writing to be “a comely hand.”

You may remember Salomé from Everything is Going On Brilliantly, our Oscar Wilde exhibition of spring 2015. Kathy Haas, who was conducting the tour, pointed out that in this manuscript Salomé’s infamous dance is only indicated by the stage direction elle danse, whereas in the typed manuscript owned by the Free Library’s Rare Book Department, the direction indicates elle danse la danse des sept voiles. The difference between the two is like a physical trace of Wilde’s invention of the seven veils, a vivid and enduring image which is not included in the biblical story of Herod.

Of course we visited a few pages of our Ulysses manuscript. Our Abbey Theatre guests reminded us that John Quinn not only defended Ulysses but also defended the Abbey Theatre from an obscenity charge in America, incurred while touring The Playboy of the Western World by John Millington Synge around 1911-1912. Quinn was successful in releasing them from the charge; more successful than he was in defending Ulysses, Kathy noted.

We only had an hour to show off some of our favorite pieces, but we had just enough time to visit the manuscript poems by Yeats, including “Never Give All the Heart.” “Hold something back for dessert,” one of the Theatre members joked in reference to the title, but as he read the poem aloud for us it did seem like something important was saved for last. 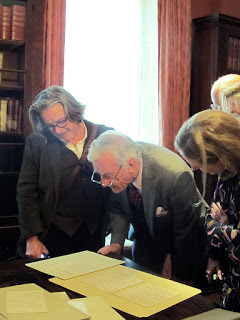 “Never Give All the Heart” was written in 1904, a year of political tensions and literary interest. It is the year that the Abbey Theatre opened its doors to the public and staged its first production in Dublin. It is the year in which all of the action in James Joyce’s Ulysses takes place, and also the setting for a play called Dublin By Lamplight which will be performed by our friends Inis Nua Theater Company this fall. 1904 was a year of conflict and restlessness that presaged the eventual Easter Rebellion, which is the topic of the play our Abbey Theater visitors were in Philadelphia to perform. Although they concern the politics of a century ago, these works still captivate us today.

We truly enjoyed sharing our collection with the Abbey Theatre, who shared so much of their own knowledge and insight in return. But we’ll be opening up conversations about Irish literature, history, and culture in several events this fall. If you’d like to see some of these manuscripts for yourself, join us on November 18 for a Hands-On Tour featuring Irish authors. If you’d like to hear present-day Irish poets recite their award-winning poetry, join us for In Conversation with the Rosenbach on November 17. And if the political plays performed by the Abbey Theater and Inis Nua Theater Company caught your attention, catch up with 21st-century Irish politics with political scientist Brendan O’Leary on December 8.