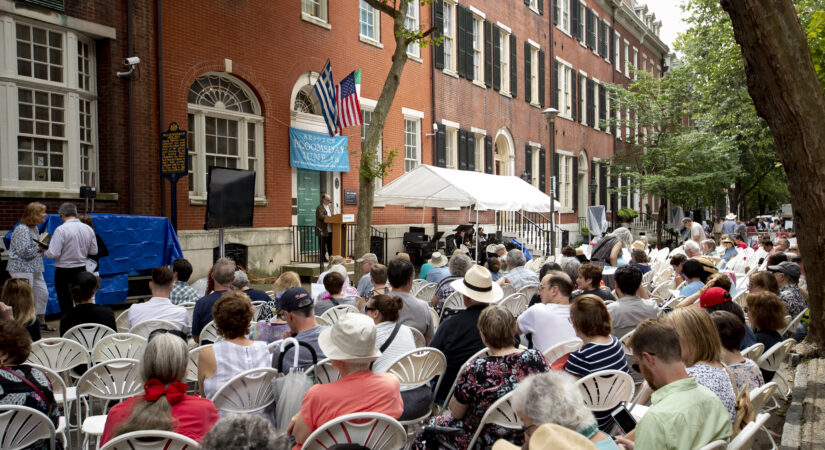 PHILADELPHIA, May 23, 2022—Every year, the world celebrates Bloomsday on June 16, the day that James Joyce’s Ulysses is set in 1904. Nowhere celebrates quite like The Rosenbach Museum and Library, home of Joyce’s manuscript. Ulysses was published 100 years ago in 1922, and after two years, the in-person festival returns, just in time for the centennial.

Bloomsday is a day-long public reading with musical performances that bring the epic novel to life. Joyce enthusiasts and novices alike can drop by any time to listen to the reading, relax in the beer garden with local food trucks, and enjoy free admission to The Rosenbach to view portions of the manuscript in our new exhibition, 18 Reasons to Read Ulysses. Bloomsday is FREE and open to the public. Guests can drop by any time between 11:00 a.m. to 8:00 p.m. on Thursday, June 16, Full details at www.rosenbach.org/bloomsday.

“James Joyce’s Ulysses has been called the greatest modern novel, but it has also inspired scores of writers and readers since its publication in 1922, solidifying its place as one of the most influential novels of all time.” Says Kelsey Scouten Bates, The Rosenbach’s John C. Haas Director. “The Rosenbach is proud to celebrate this 100th anniversary of the groundbreaking genius and impact of Ulysses.”

Alongside the Bloomsday festival on June 16, The Rosenbach presents a series of special programs.

In the event of rain, the Bloomsday festival will be moved to Trinity Memorial Church at 22rd and Spruce Streets. To learn more about Bloomsday and to register, visit rosenbach.org/bloomsday.

The Rosenbach creates unique experiences for broad audiences through programs inspired by its world-class holdings of literature and history. The Rosenbach is located in Center City Philadelphia and is open to the public with growing content available at all times on Rosenbach.org. The Rosenbach is affiliated with the Free Library of Philadelphia.