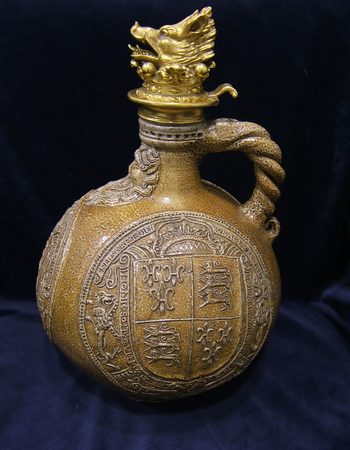 Developed in the mid-sixteenth century, round-bellied jugs bearing bearded faces were known as Bellarmines, after the famous Jesuit cardinal. Used as decanters in taverns and for domestic storage, the jugs are mentioned in contemporary literature by William Cartwright and Ben Jonson. Although produced in Germany, this example bears Elizabeth I’s coat of arms, together with the Order of the Garter, clearly indicating that it was intended for the British market. A mold for similar arms was found on a kiln site at Raeren. The silver gilt stopper is a nineteenth-century addition bearing the crest of Campbell, Marquess of Lorne.

Featuring a stunning array of creations from fine art and silver to books and maps, Of Two Minds: Creative Couples in Art and History explores the achievements of romantic couples across…
Read more
[pirate_forms]