In this letter, Ezra Pound responds to a set of poems he invited Moore to submit to The Little Review, an avant-garde literary magazine. Pound offers Moore various editorial suggestions, but also expresses interest in publishing a book of her work, even though “You will never sell more than five hundred copies, as your work demands mental attention.”

Moore and Pound became close friends and corresponded over the course of their lives, even during Pound’s imprisonment (under charges of treason against the United States during World War II) and subsequent institutionalization. 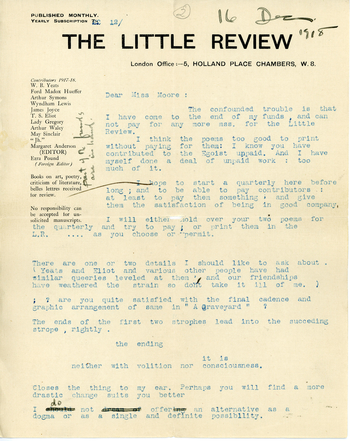 No related exhibitions were found...
[pirate_forms]