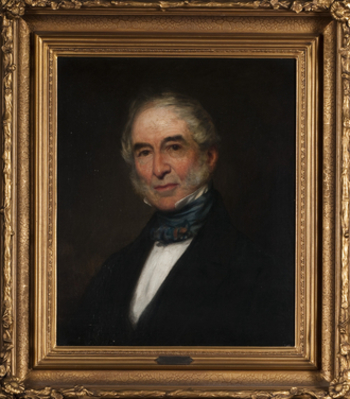 This portrait depicts a stately, elderly Joseph Gratz (1785-1858). Gratz’s age and costume suggest that the painting was done around 1850. The artist, G.P.A. Healy was an extremely prolific portraitist, known for his images of famous men. Among Healy’s American subjects were Daniel Webster, Henry Clay, Millard Fillmore, John Tyler, Abraham Lincoln, and U. S. Grant.

Joseph Gratz was a merchant and served as a member of the First Troop, Philadelphia Cavalry during the war of 1812. He later helped organize the Philadelphia Institute for the Deaf and Dumb and served as secretary of Mikveh Israel. This painting descended through the family of Sara Gratz Moses, the daughter of Rachel Gratz and Solomon Moses.