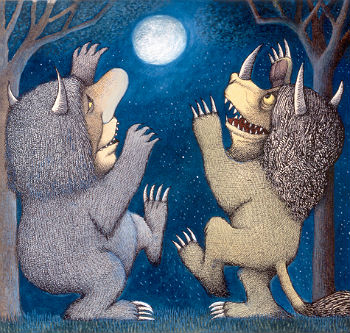 From 1968-2014 the Rosenbach was the repository for the picture book illustrations of artist and author Maurice Sendak (1928-2012). After his initial visit here in 1966—and thanks to a kinship the artist felt with the rare books and artwork collected by the Rosenbach brothers—Sendak began to leave his artwork for such books as Where the Wild Things Are (1963), In the Night Kitchen (1970), and Outside Over There (1981) on deposit at the Rosenbach where they were regularly exhibited to the public and accessible to researchers. The deposit comprised more than 10,000 pieces of original artwork, as well as manuscripts, dummy books, correspondence, printer’s proofs and other working materials, plus ﬁrst editions of Sendak’s books.

In 2014 the Rosenbach returned the collection to Mr. Sendak’s estate and Foundation, the legal owners of the deposit. All requests for loans of original artwork and permission to publish Sendak images should be referred to the Sendak estate via its agent, Andrew Wylie of The Wylie Agency. Full contact information can be found on the WATCH database (Writers, Artists, and Their Copyright Holders).

The Rosenabach still retains a small collection of original book art by Sendak and editions of many of his notable works collected separately from the deposit.

Maurice Sendak was an avid book collector as well as creator. In 2016, the Rosenbach received a bequest of a substantial number of rare books and manuscripts from Maurice Sendak’s personal library. The bequest, which includes first editions and manuscripts by author Herman Melville and illustrated books by artist, printer, and writer William Blake, are now part of the Rosenbach’s permanent collection.

No highlights were found...

No related posts were found...

Past exhibition: Sendak in the ’60s

Amidst the turbulence of 1960s America a quiet revolution took place where few expected it: the world of children’s books. Maurice Sendak was part of a vanguard of writers and…
Read more

Colbert Nation has raised its flag at the Rosenbach Museum & Library…or, at least its flagpole.
Read more

Past exhibition: Maurice Sendak: A Legacy

Celebrate Sendak’s revolutionary work and artistic talent in this landmark exhibition, displaying more than 65 drawings from his 65-year career. Refreshed with new material every four months, this exhibition will…
Read more
[pirate_forms]