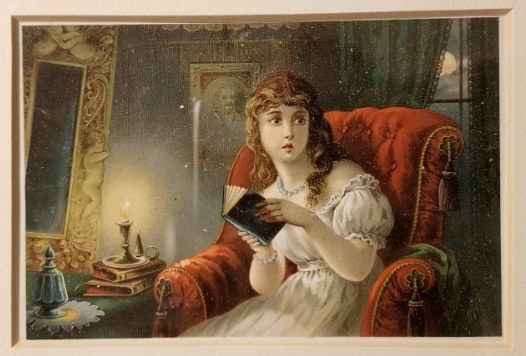 As a literary genre, the Gothic is often associated with ominous castles, dark, stormy nights, and people fleeing from unnamed horrors.  But the Gothic is—and always has been—much more complicated and interesting than this, because it uses gender, ethnicity, sexuality, and the erotic to hint at the radical potential inherent in all of us.  In this book club, we’ll read historic and contemporary works of Gothic fiction inspired by the Rosenbach’s collections.  Each month, the club will cozy up in the candle-lit, historic West Library of the Rosenbach mansion, view objects from the collection, and discuss the Gothic’s connections to gender, sexuality, race, and ethnicity.*

Gothic novels often ask readers to consider–and be suspicious of– social structures. As such, we focus on writers from the “margins”–Queer people, women, and People of Color, for instance–grappling with how they question society and their characters’ places in it. Each club meeting will touch on the roots of the Gothic in the 18th and 19th centuries but focus on 21st-century themes.  Only books by women, People of Color, and/or Queer authors will be read by the club.  Join us as we embark a surreal literary voyage! *For the safety of collections, battery-operated electronic candles will be used.

The program is held on the following dates:

Space is limited and advance registration is strongly recommended.

Waitlist for all three sessions

Waitlist for The Picture of Dorian Gray

Waitlist for White is for Witching

We are proud to partner with Harriet’s Bookshop. All three books are available for purchase online through our partner. Shop here.

About the Book Club Facilitators

Dr. Petra Clark is a literary historian, educator, and library professional. She earned her PhD in English from the University of Delaware in 2019 with a specialization in Victorian literature and art, particularly focusing on magazines created by and for women during the late nineteenth century. Petra has taught college courses on everything from research writing and feminist literature to comics history and monster media, as well as a recent Rosenbach course on the artist Aubrey Beardsley. She currently works in the Special Collections department at the University of Delaware Library, but when she isn’t haunting the rare books stacks, she can usually be found reading creepy fiction with her cat.

Dr. Samantha Nystrom is an avid fan of reading, painting, baking, playing Scrabble, and analyzing stories. She learned how to do such narrative pondering during her time at the University of Delaware, where she received her PhD in English Literature. While at UD, she taught classes ranging from film studies to British Literature to composition, which focused on how identities are constructed and represented. Her class on British Literature, for example, focused on texts with the monstrous other, asking students:  Who is the true monster? Her research asked questions about the role gardens and landscapes had in constructing personal, national, and imperial identities within 19th-century Britain; her work on Walter Scott and Gothic landscapes and architecture will soon be published in the peer-reviewed journal, Studies in Romanticism. She currently lives in Philadelphia with her vampiric cat, Percy, and is a writer at Jefferson.

Dr. Alexander Lawrence Ames, Associate Curator of the Rosenbach Museum & Library, vividly recalls his teenage experiences with Gothic literature: terrifying himself so thoroughly with J.S. LeFanu’s Uncle Silas that he dared not leave his bedroom, falling under the spell of Mrs. Radcliffe’s enchanting countrysides in The Romance of the Forest, feeling the pangs of youthful longing for the noble young Valancourt in The Mysteries of Udolpho, and hearing Mr. Rochester’s voice on the wind in Charlotte Brontë’s Jane Eyre. Dr. Ames will lead artifact show-and-tell sessions at each meeting of Ladies of the House of Love, to help club members situate book club selections in the context of the Rosenbach’s collections.  When not hosting book clubs or curating Rosenbach exhibitions, Dr. Ames is likely playing haunting melodies on his Celtic harp, or strolling pensively across the castle grounds as twilight breaks.