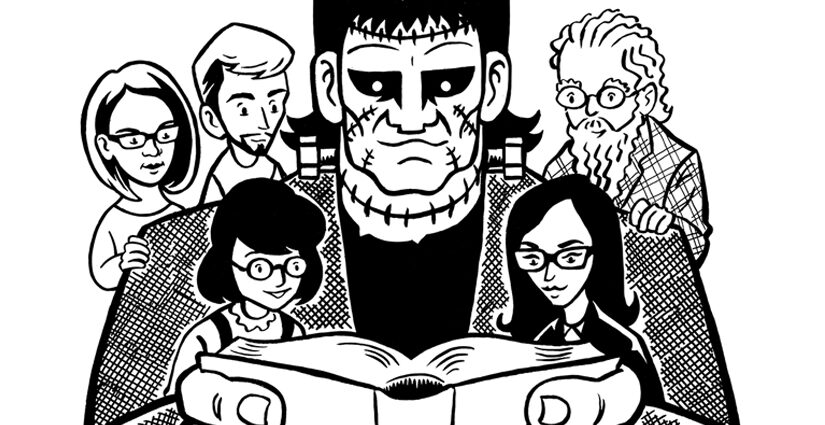 Following our very successful series, Sundays with Dracula, which ran from May 3–November 15, 2020 (you can watch past episodes here!) we now bring to you a fifteen week exploration of Mary Shelley’s Frankenstein. Shelley’s landmark monster novel was a defining work of the Romantic Age and continues to fascinate readers over 200 years later.

Every Sunday from 2-4 p.m. beginning on January 24, 2021 and ending on May 2, Edward G. Pettit and a revolving set of co-hosts will dissect, annotate, anatomize the novel Frankenstein live on Zoom. Each week we’ll talk about the novel, usually two chapters at a time, to fully illuminate and understand this monumental work of fiction. Sometimes we’ll be joined by special guest experts. We’ll also share items from The Rosenbach’s collections that relate to the novel and look at pages from Shelley’s manuscript available online at The Shelley-Godwin Archive. Just as we did with Dracula, every week we’ll also feature a special cocktail inspired by the book and brought to you by Art in the Age.

Register in advance to join this virtual program on Zoom and participate in the chat during the program. Join the Sundays with Frankenstein Facebook group for further discussion between the episodes.

We use the 1818 edition of the novel for the text and chapter divisions, you can read that text here. We recommend any complete 1818 edition, however if you are reading Shelley’s 1831 edition, we will also talk about the changes made to that edition whenever they occur.

Edward G. Pettit is the Sunstein Manager of Public Programs at The Rosenbach. In a former life, he taught monster books at a Philadelphia University. He recently presented the successful series Sundays with Dracula. When not participating in reading marathons, he can usually be found at literary-themed cocktail parties.

Dr. Lauren Nixon was awarded her PhD from the University of Sheffield in 2020, where she was co-organiser of Sheffield Gothic for six years. Lauren’s thesis project focused on the representations of war and military masculinity in late eighteenth century Gothic fiction, exploring the interconnections between conflict, gender, and nationality during the Revolutionary and Napoleonic Wars. Although an absolute scaredy cat and really bad with horror, Lauren’s interest in the Gothic’s ongoing engagement with war crosses into contemporary texts too: Lauren was the co-founder of Gaming the Gothic and has presented work on film, television, video games, and Kpop. In addition to her research Lauren works frequently in outreach education, delivering workshops and masterclasses for GCSE and ALevel students as well as lectures and programmes for public engagement. In a previous life, Lauren worked in museums and has written on the life and works of Jane Austen. Rumour has it she is a renegade Austen scholar, but these reports are currently unconfirmed.

Mary Going is a PhD candidate at the University of Sheffield, exploring depictions of Jewish characters, myths and legends in late-eighteenth and early-nineteenth century literature. Along with Lauren Nixon she is co-organiser of Sheffield Gothic and the Reimagining the Gothic project, and is also lead organiser of the Gothic Bible project which hosted a ‘Buffy and the Bible’ conference in 2019 – complete with an evening Buffy singalong. Her publications include a chapter on Jewish vampires in Horror and Religion (UWP, July 2019), an article on witches, Jewish persecution, and sexual violence in Ivanhoe (in Bible and Critical Theory, 2019), and a forthcoming chapter exploring Supernatural and police procedurals. She is also the current Web Officer for the International Gothic Association.

Dr. Anastasia Klimchynskaya is a postdoctoral fellow at the Stevanovich Institute on the Formation of Knowledge at the University of Chicago. Her current book project focuses on the emergence of science fiction in the nineteenth century, arguing that Frankenstein and the works of Edgar Allan Poe, Jules Verne, Albert Robida, and H.G. Wells represent the formal expression of a new set of paradigms through which humanity saw the world following the Industrial Revolution. She has presented widely on science fiction (including Frankenstein) and the history of science at the Science History Institute in Philadelphia, the Cyberpunk Culture Conference, the City Tech Science Fiction Symposium, Science in Public, and the Philadelphia Science Fiction Conference (Philcon), of which she is also the deputy programming head.

Dan Hodge has been an actor and director in the regional theatre for over twenty years. A mainstay on Philadelphia stages, he has been seen at the Arden, the Wilma, the Walnut, InterAct, Theatre Exile, and many others. As a co-founder of the Philadelphia Artists’ Collective, he has honed his skills on classical texts, becoming one of the region’s most active directors of Shakespeare and his contemporaries. Funnily enough, the inspiration to become an actor came from seeing Boris Karloff’s performance in the 1931 Universal FRANKENSTEIN. An impressionable eight year old, that performance arrested his imagination, and gave him his life’s work. To his delight, he had the opportunity to give his best Peter Cushing impersonation, playing Victor Frankenstein in Luna Theatre’s production of MONSTER in 2008. A collector since high school (and before), he has amassed a collection of horror film memorabilia stretching back into the 1920s. It is a source of both pride and shame.

Show your support for Sundays with Frankenstein with limited edition merchandise!