HER RELATIONSHIP WITH THE PROMINENT EDUCATOR Edwina Kruse was the longest-lived and most substantial of Dunbar-Nelson’s relationships with other women. Letters exchanged by the two women reveal the intricacies of their relationship while highlighting an intimate bond that created a legacy of Black education.

Kruse was born in 1848 in San Juan, Puerto Rico, to a German father and a Cuban mother. In 1881, she became the first Black principal of Howard in Wilmington, Delaware, the only four-year high school program in the state that admitted Black students. Dunbar-Nelson joined Howard’s faculty in 1902, where she directed the English department. Her rigorous teaching curriculum challenged students to become familiar with recognized classics of Western literature as well as works by Black authors. Together, Kruse and Dunbar-Nelson created a community of Black excellence not just in the halls of Howard but in the community of Wilmington. In 1920, the two educators, along with the Federation of Colored Women, helped to open the Industrial School for Colored Girls—a school where young Black girls considered “delinquent” received education and training.

The relationship between Dunbar-Nelson and Kruse was not uncommon for middle-class Black women in the early 20th century. Often, Black women educators, writers, actresses, and musicians had romantic and sexual relationships with other Black women, even if they presented themselves as heterosexual women married to men. Despite the secrecy of these romantic relationships, Black women found community, support, and pleasure with other women before the terms “queer,” “bisexual,” or “lesbian” were used to label these relationships. 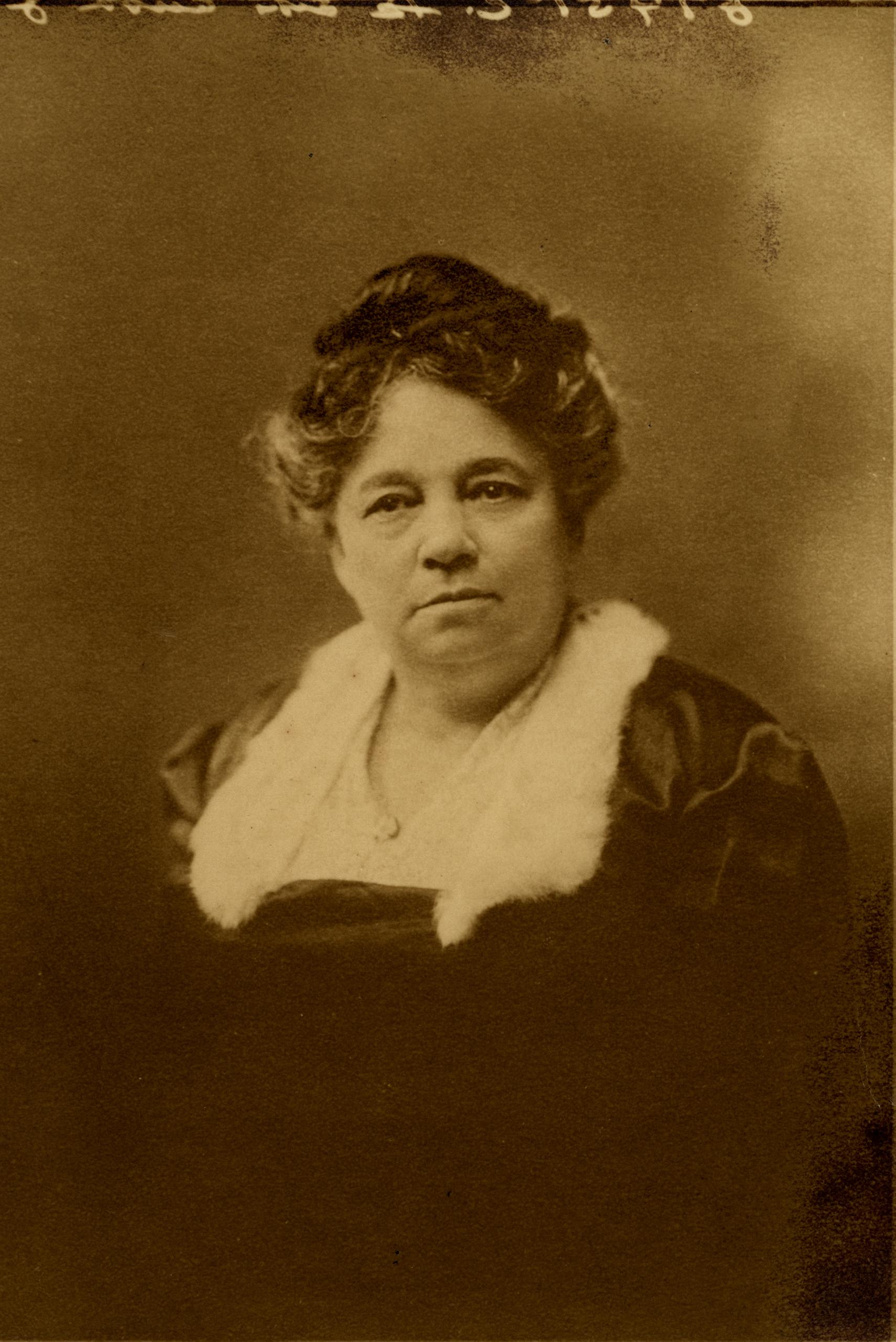 Edwina Kruse was highly regarded by community members and students. During the “Kruse Day” ceremony in 1929, several students and teachers, including Dunbar-Nelson, publicly appreciated Kruse’s dedication to Howard High School and Black education in Wilmington.

Their long-term relationship made these women nearly inseparable. When distance kept Dunbar-Nelson and Kruse apart, they used letters to update one another on school, family, and political events. More importantly, they used these letters to communicate their care, love, and support for each other. Despite being 27 years older than Dunbar-Nelson, Kruse admired her companion’s work ethic and contribution to Howard and Black education. The age difference between them did not stop them from pursuing a romantic relationship, which was kept out of the public eye. In 1920, Dunbar-Nelson and Kruse had a fallout that created a divide in their relationship, but this tension between the two women did not stop Dunbar-Nelson from celebrating and honoring Kruse after her passing in 1930. 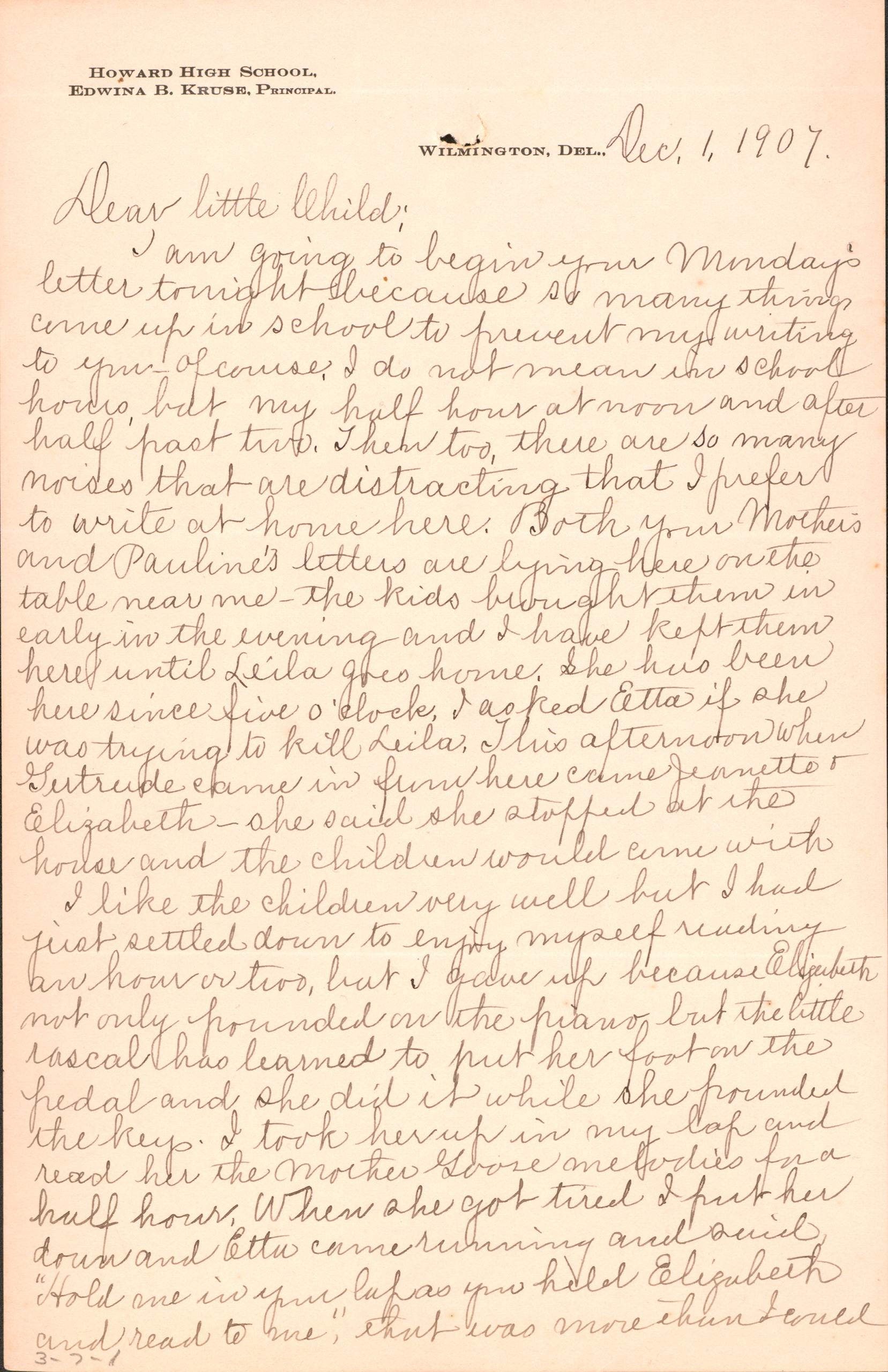 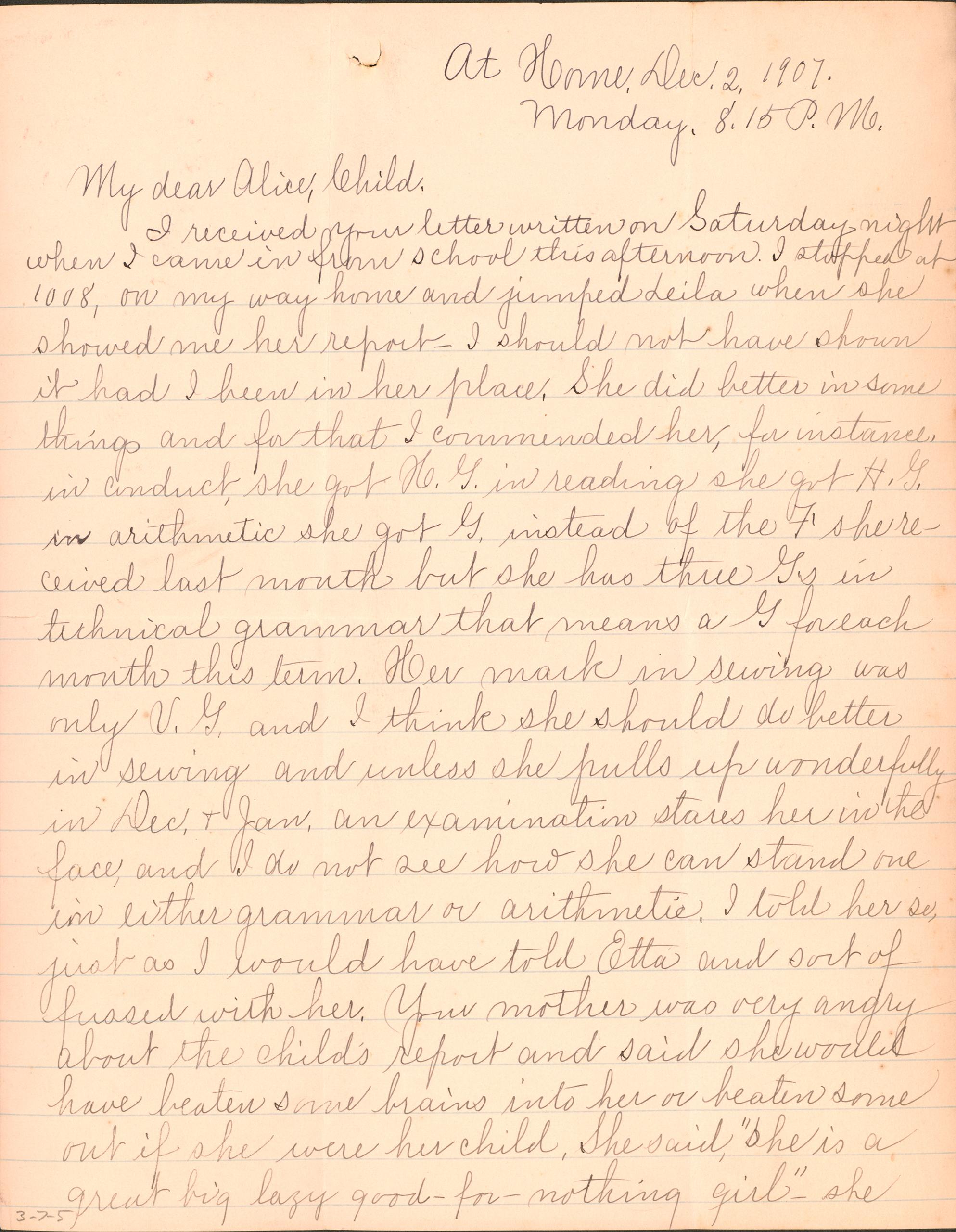 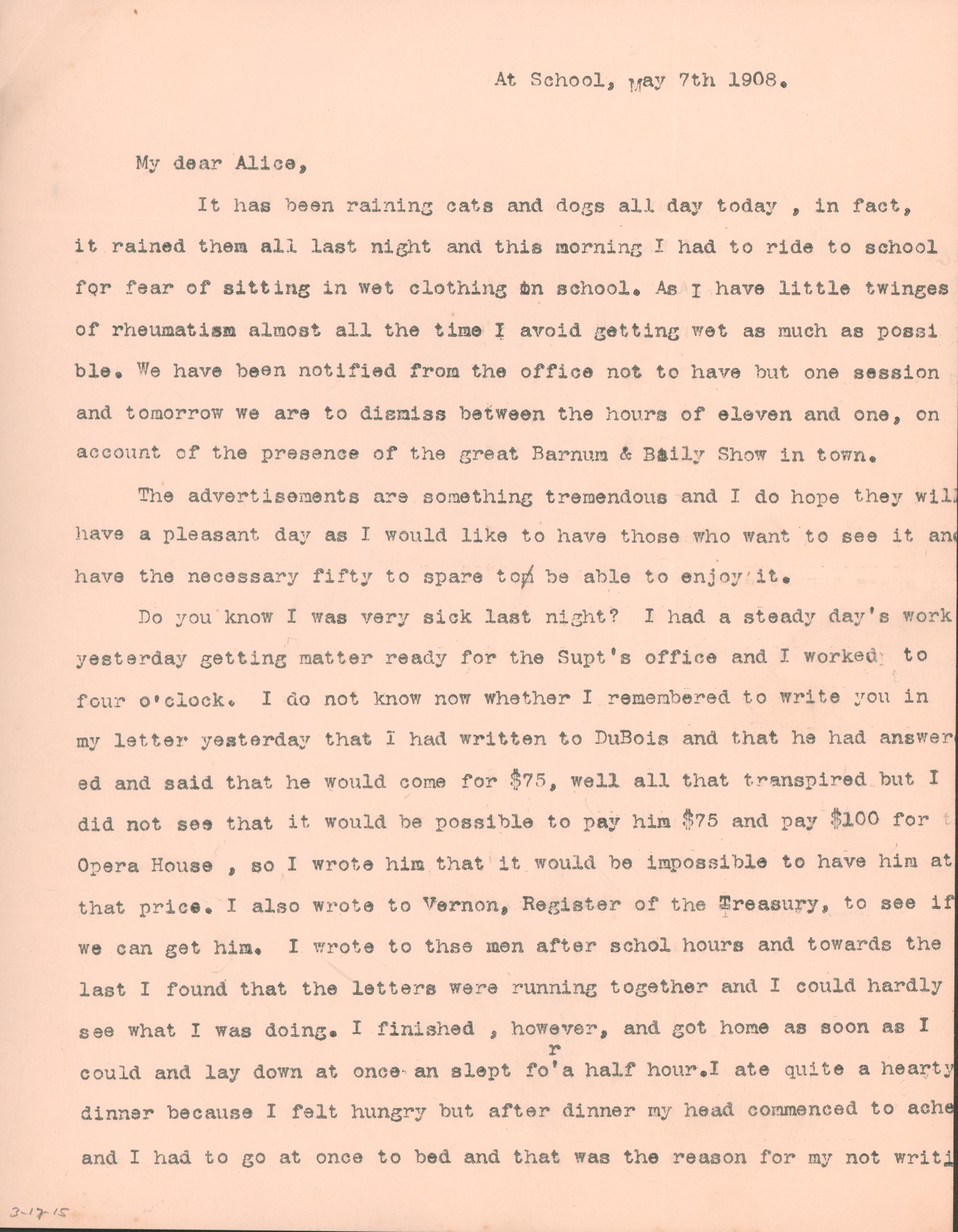 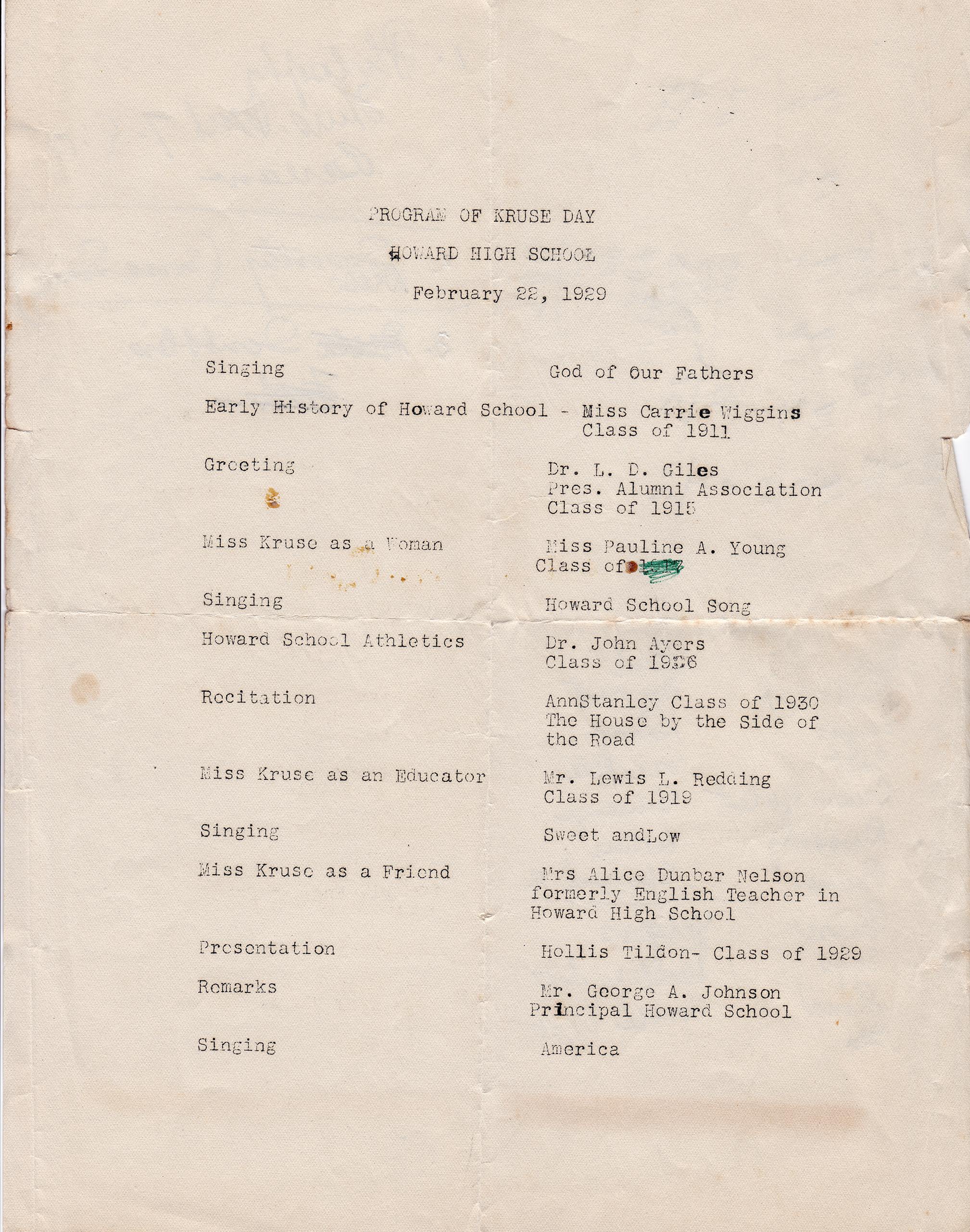 These letters between Dunbar-Nelson and Edwina Kruse vary in range and topic. Kruse notified Dunbar-Nelson of incidents that occurred at Howard High School, students’ report cards, and special events on campus. Kruse often shared information about Dunbar-Nelson’s mother, her sister Mary Leila, and her nieces Ethel, Leila, and Pauline Young. Dunbar-Nelson’s nieces attended Howard and admired Kruse especially during their aunt’s leave of absence. The letters reveal Kruse’s close bond with the Young family and her attention to the children’s education.

The letters also show Kruse’s concern for Dunbar-Nelson’s health, both mentally and physically, constantly reminding her to take study breaks and not to overexert herself. Kruse often addressed Dunbar-Nelson as “my dear Alice” and “dear little child.” Dunbar-Nelson would often return the gesture by calling Kruse “Ned,” a nickname between the two women. Kruse regularly sent her gifts, hoping that her companion would have a piece of home with her.

The letters shed light on the lived experiences of Black women educators as they navigated social life and fulfilled a quest to build Black education in Wilmington. While little doubt remains concerning the nature of Dunbar-Nelson and Kruse’s romantic relationship, it is important to acknowledge the fluidity of Black women’s relationships and how they functioned as networks of education and activism in the early 20th century.

More Than A Vocation

“Clothed With Strength and Dignity”