The late 1920s were lively times for Alice Dunbar-Nelson—and much of the United States’ Black literary community.

THOUGH SHE NEVER LIVED IN NEW YORK CITY, Dunbar-Nelson was at the heart of the literary movement known as the Harlem Renaissance.

Photographer and patron of the Harlem Renaissance Carl Van Vechten once sent Dunbar-Nelson a letter requesting literary memorabilia from her former, late husband. Another occasion found her seated at a table with Van Vechten, civil rights activist James Weldon Johnson, and writer Countee Cullen during an awards dinner hosted by Opportunity: Journal of Negro Life. W. E. B. Du Bois, former editor of The Crisis, casually cooked breakfast with Dunbar-Nelson at the poet Georgia Douglas Johnson’s Washington, D.C., home. And folks like writer Langston Hughes and writer/editor Jessie Redmon Fauset dropped by Dunbar-Nelson’s Delaware residence to play cards and talk about issues of the day.

Dunbar-Nelson was not a member of the same the generation of most Harlem Renaissance writers, but she read and reviewed their work. They respected her as a fellow poet, writer, and critic. Although her novels were never published, her poetry and essays appeared in Black periodicals, and her speeches were known by younger generation of thinkers.

Sexism in the worlds of publishing and literary criticism continued to be a factor in the 1920s and ’30s. Dunbar-Nelson, however, had no reservations when it came to her assessments of the literature of the period, and she was critical of some its highpoints. She envisioned Black authorship as being aesthetically free and unbound by political posturing.

The books and magazines in this section show the venues in which Dunbar-Nelson published, and how much her fellow writers valued her place in the literary sphere. 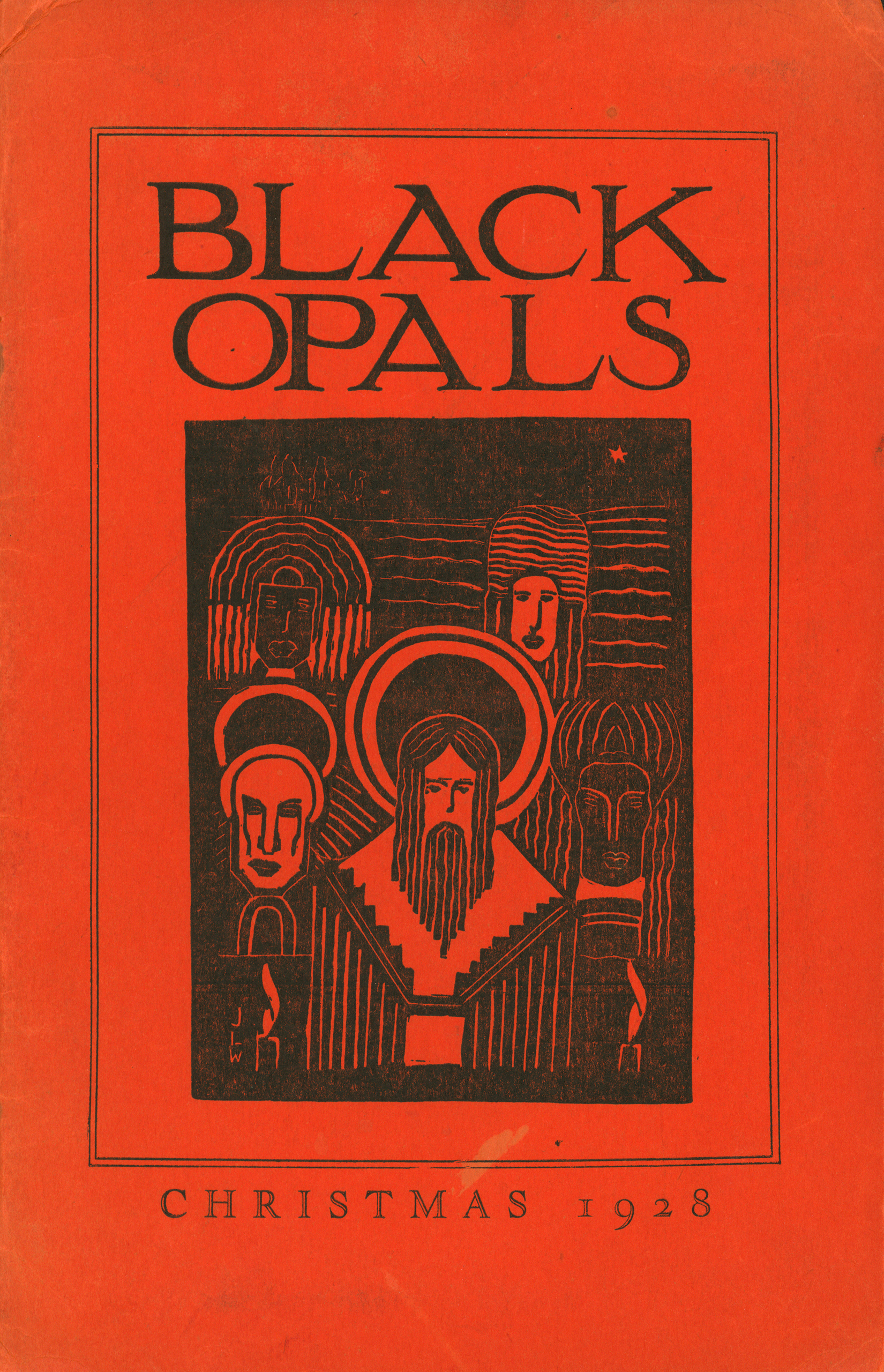 The Philadelphia-based little magazine Black Opals was a short-lived yet hugely important and often overlooked example of Black artistic and literary production in the early 20th century. The example seen here is one of 200 copies. The magazine published such writers as Lewis Alexander and Jessie Redmon Fauset—literary editor of The Crisis and sister of Arthur Fauset, who managed the launching of Black Opals—in addition to lesser known writers and poets like Nellie Bright and Mae V. Cowdery. Black visual artists also contributed to Black Opals, and these contributions have received even less attention than the literary ones in the current scholarship on this journal. This issue, for example, features a very early illustration that is believed to be by artist Loïs Mailou Jones, who would have been just 23 years old at the time and at the start of her long career in arts and education.

This copy belonged to Dunbar-Nelson, who made mention of it in a column for the Washington Eagle (January 11, 1929), writing that Black Opals “is an interesting addition to the magazine on your reading table. But at the same time, we are going to recommend to the editors a more ruthless use of the waste basket, blue pencil and rejection slip.”

Warmly inscribed in Spanish by Arturo Alfonso Schomburg to Dunbar-Nelson, this collection of poems and letters by legendary enslaved Black poet Phillis Wheatley was one of the first editions of her writings. Compiled and edited by Charles F. Heartman with an appreciation by Schomburg, this work was published as part of the Heartman Historical Series in a limited edition of only 350 copies. Schomburg, a librarian, scholar, and collector, was a major intellectual figure of the early 20th century and the Harlem Renaissance. His collection formed the basis of the Schomburg Center for Research in Black Culture, New York, one of the world’s greatest collections of Black literature, history, and culture.

As Dunbar-Nelson grew older, her interest in Black history grew. Her work in this area culminated with close to a year of intensive reading on this subject, in 1931, when she partnered with historian Carter G. Woodson to help develop a curriculum for teaching Black history. 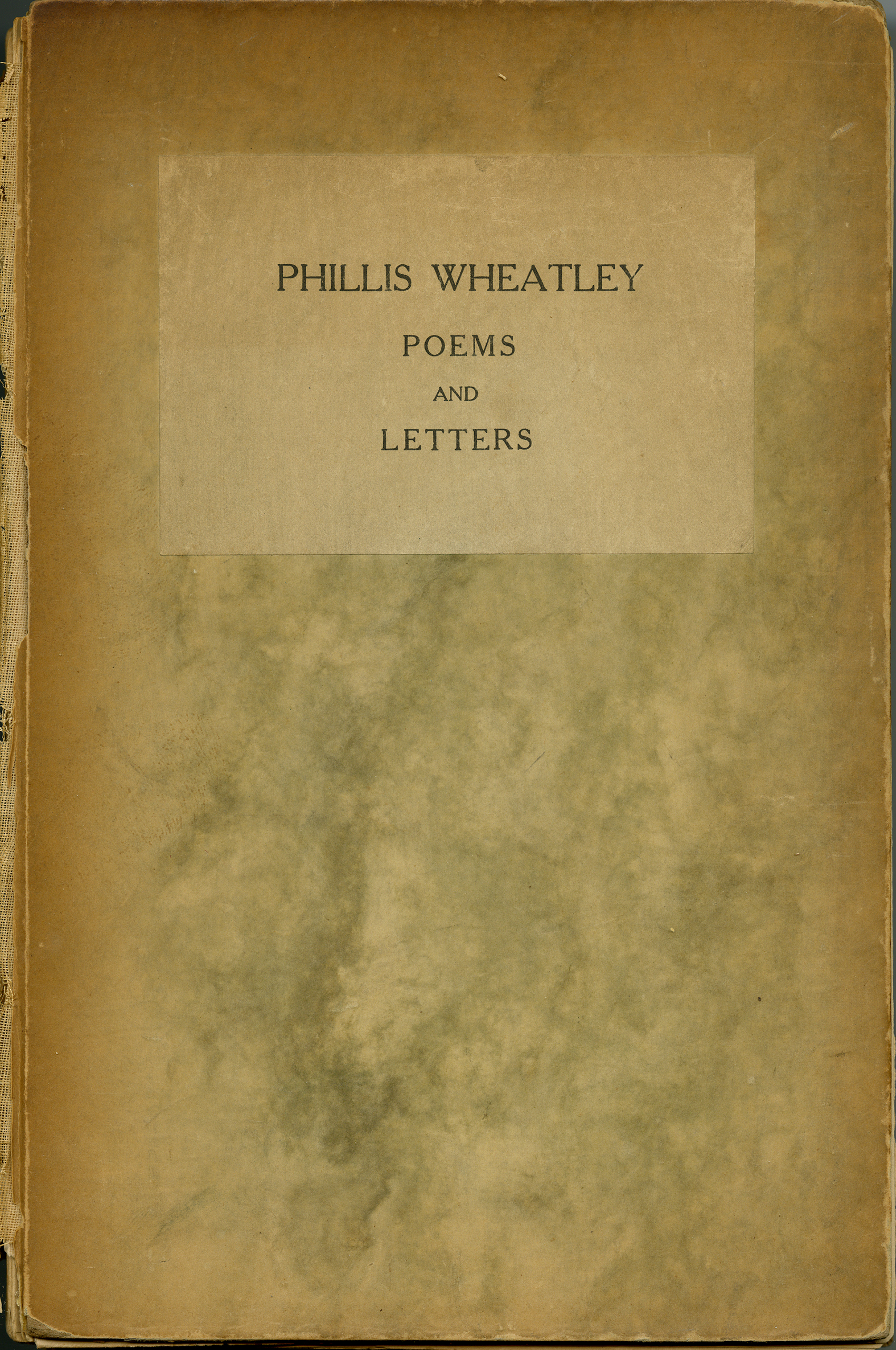 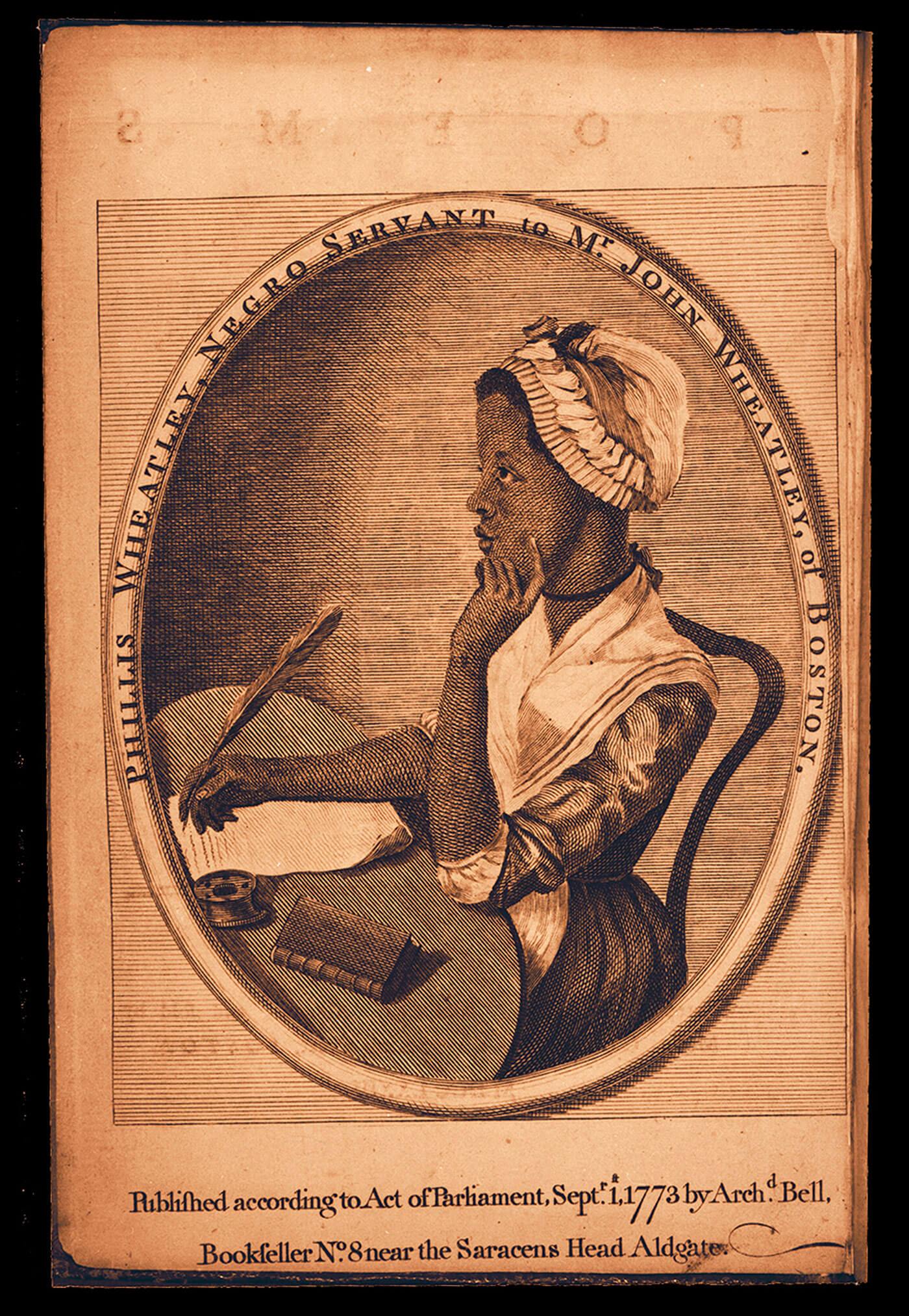 London: Printed for A. Bell, Bookseller, Aldgate; and sold by Messrs. Cox and Berry, King-Street, Boston, 1773
A 773p

Phillis Wheatley (ca. 1754–1784) was born in West Africa. At age 7, she was abducted and brought to colonial Boston.. It is believed that she was named after the ship on which she was forcibly transported to America. John Wheatley purchased her as a domestic slave for his wife, Susannah. Phillis was taught to read in English, Latin, and possibly Greek. Her early promise in composing poetry led to her initial publication in the Newport Mercury newspaper in 1767. Susannah sent Phillis to London in 1773, where she met the Countess of Huntingdon, who assisted her in publishing this volume of poems, the first by a Black woman. Phillis’s poems speak to her intellect, learnedness, and engagement with the artistic and political community around her. Dunbar-Nelson felt a lifelong attachment to Phillis’s life, work, and legacy.

With a series of drawings by Aaron Douglas and calligraphic lettering by Charles Buckles Falls, James Weldon Johnson’s God’s Trombones is known for its powerful poetic rendition of the Black religious oratory tradition. This is a presentation copy, or a copy of the book presented by its author. That Dunbar-Nelson received this book is testament to how much leading voices of the Harlem Renaissance valued her opinion. Johnson wrote in the volume: “I hope you will like some of the others, Alice, as well as you liked ‘Go Down Death.’” 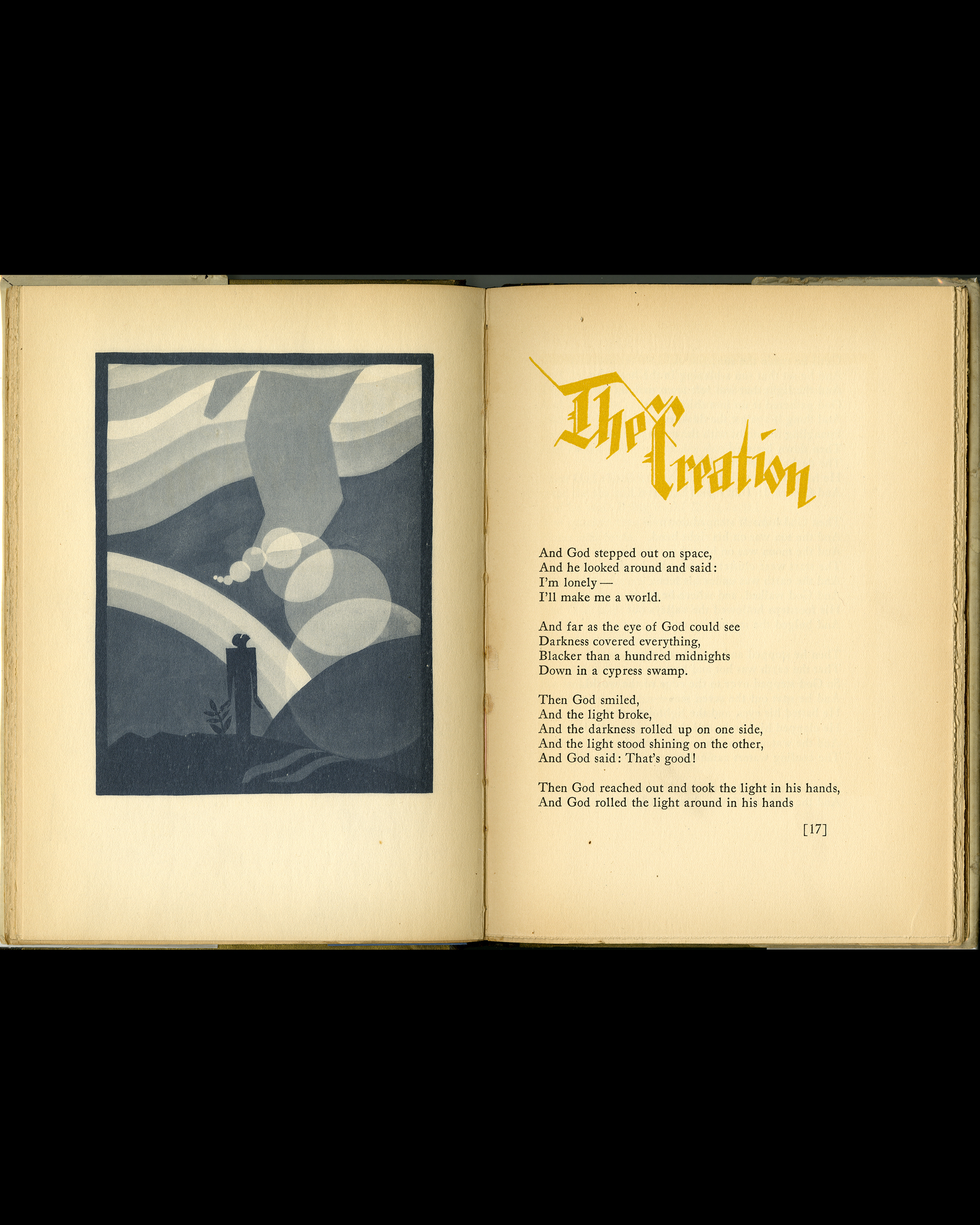 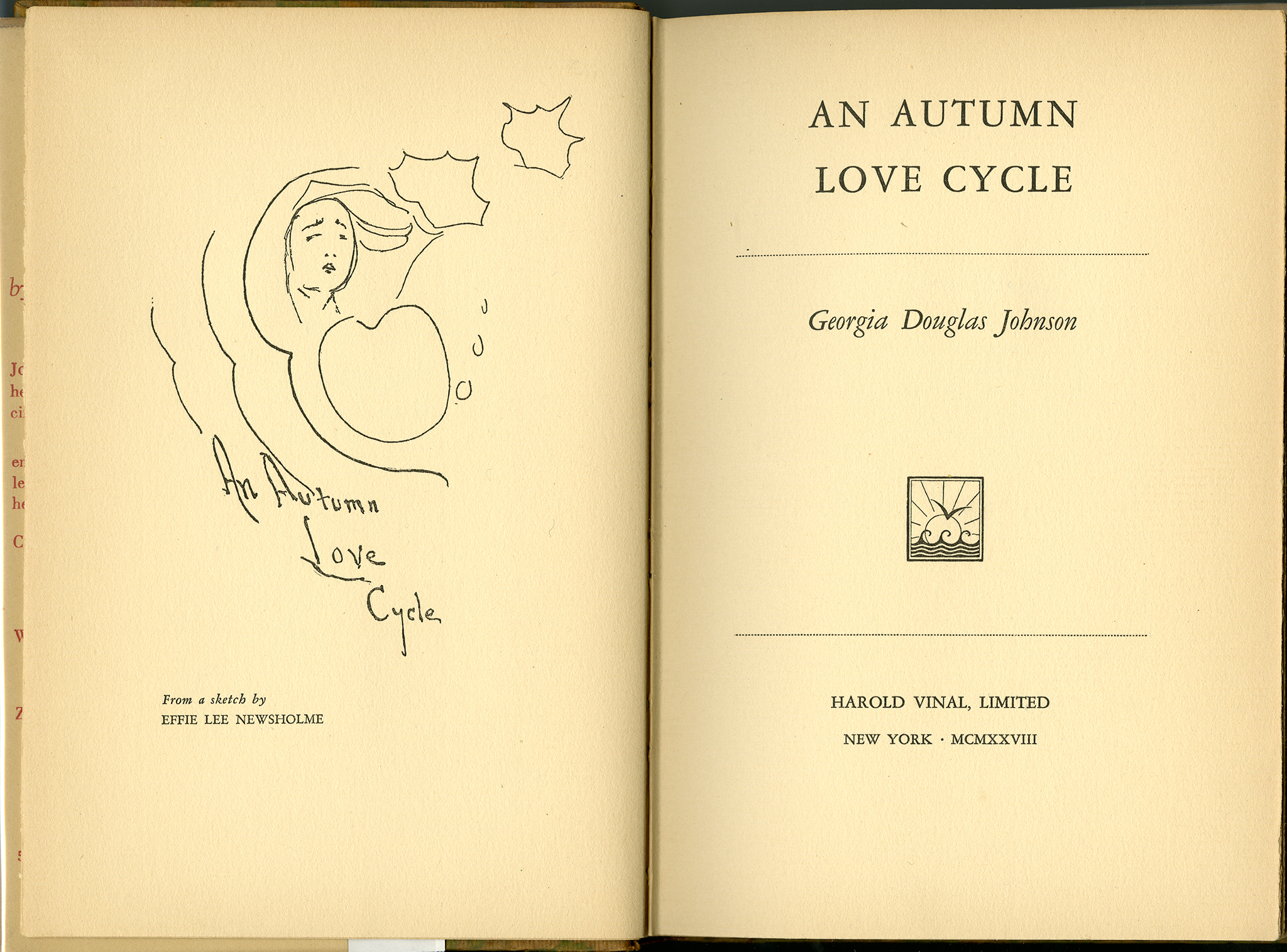 This copy of Georgia Douglas Johnson’s An Autumn Love Cycle from Dunbar-Nelson’s surviving personal library holds special significance. The book is comprised of love poetry written by Johnson roughly between the years of 1918 and 1928. In a diary entry dated Saturday, October 1, 1921, Dunbar-Nelson recalls that Johnson had her look over the manuscript in its early stages while Dunbar-Nelson had lunch with Johnson and her husband (Henry Lincoln “Link” Johnson) at their Washington, D.C., residence, an influential literary salon. In the diary entry Dunbar-Nelson privately suspects that Johnson’s poems had been inspired by a love affair, and she relates this premonition back to her own brief romance with journalist and envoy Emmett J. Scott. Indeed, correspondence shows that Johnson became romantically involved with one of the book’s editors, the Black luminary W. E. B. Du Bois. Years later, Dunbar-Nelson reviewed this book for a syndicated column. A review slip with Dunbar-Nelson’s signature is found inside the book.

Woman of the Press