Alice Dunbar-Nelson devoted much of her professional life to teaching.

More than a Vocation

MANY OF HER WRITINGS DISCUSS teaching methods and developing instruction focused on black history and culture. She worked with famous historian Carter G. Woodson to help in his efforts to do the same. A lifelong learner, she was equally relentless when it came to pursuing her own education.

After graduating from Straight University (now Dillard University) in 1892, Dunbar-Nelson became a public school teacher in New Orleans, beginning a career in education that spanned nearly three decades. After leaving Louisiana, she helped run the children’s education program at New York City’s White Rose Mission settlement house for young Black women with writer and activist Victoria Earle Matthews. Relocating to Wilmington, Delaware, after separating from her first husband Paul Laurence Dunbar in 1902, she taught at Howard High School. By the 1910s, she was the head of the school’s English department, where she was widely praised for professionalizing the program. Her time there lasted until 1920, when she lost that position over a dispute with the school’s principal, Ray Wooten, centered on her attendance at a Social Justice Day event in Marion, Ohio, on October 1, 1920. She was fired for engaging in “political activity” and, according to the school, for not being a team player.

During her years at Howard, Dunbar-Nelson also facilitated summer sessions for in-service teachers at the State College for Colored Students (now Delaware State University) and taught summer classes at the Hampton Institute in Hampton, Virginia. She and Howard principal Edwina Kruse supported the establishment of Marshallton, Delaware’s Industrial School for Colored Girls, located just outside of Wilmington. The school’s stated mission was to “take so called delinquent girls, against whom society has sinned, and by wise and careful training restore them to a normal life, decent and worthy members of the community.” 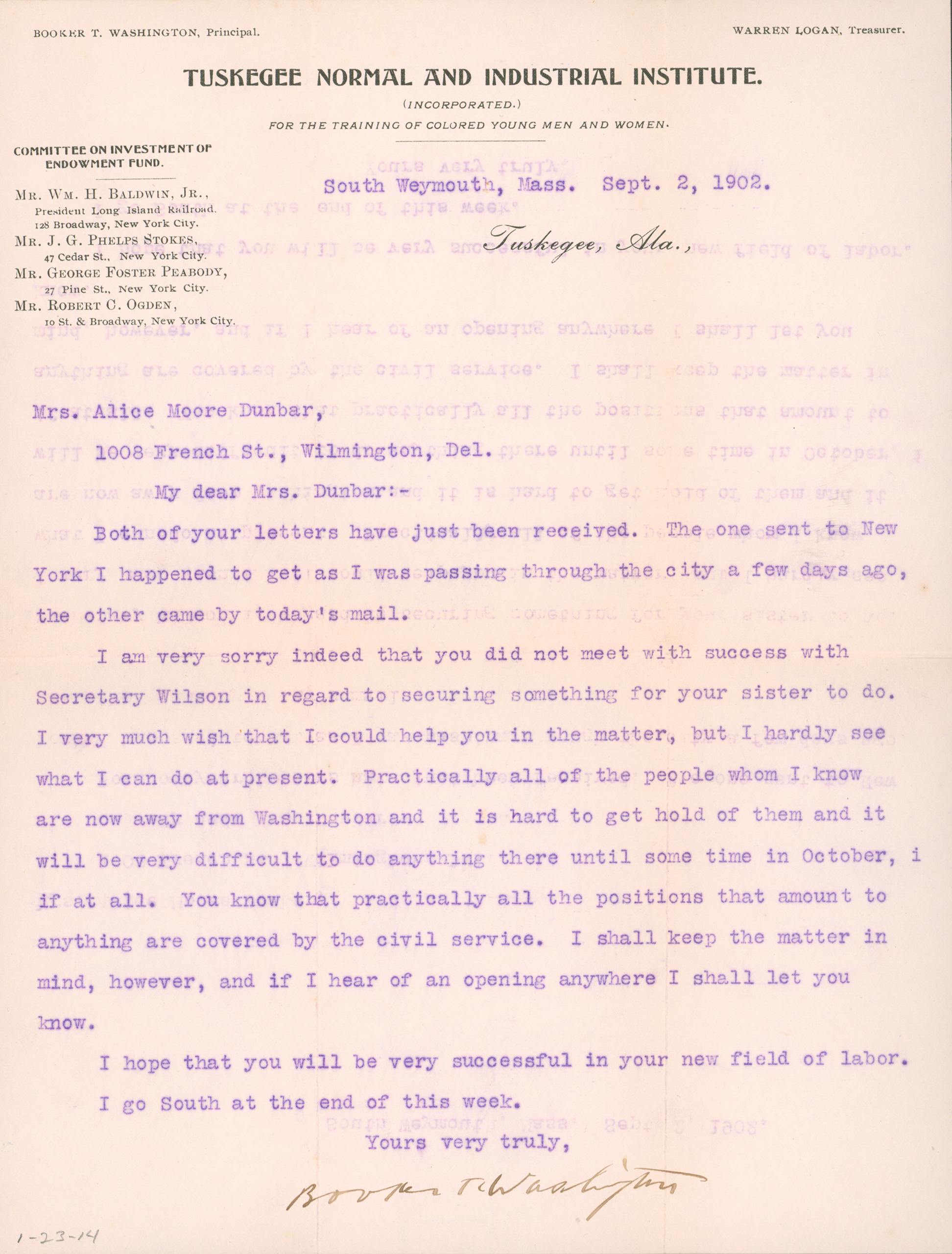 Dunbar-Nelson was an avid reader. She read in all genres and had a particular fondness for crime fiction, which she considered a guilty pleasure. However, much of Dunbar-Nelson’s reading was done for the purpose of enriching her own knowledge in various subjects, thus improving her teaching. In a series of three reading journals, Dunbar-Nelson documented nearly every book she read over two decades. The first journal (1906–1908) shows her passion for the classics and British poets of the Romantic era. The journals’ reviews range from playfully irreverent and pithy to intensely reflective and full of insight. 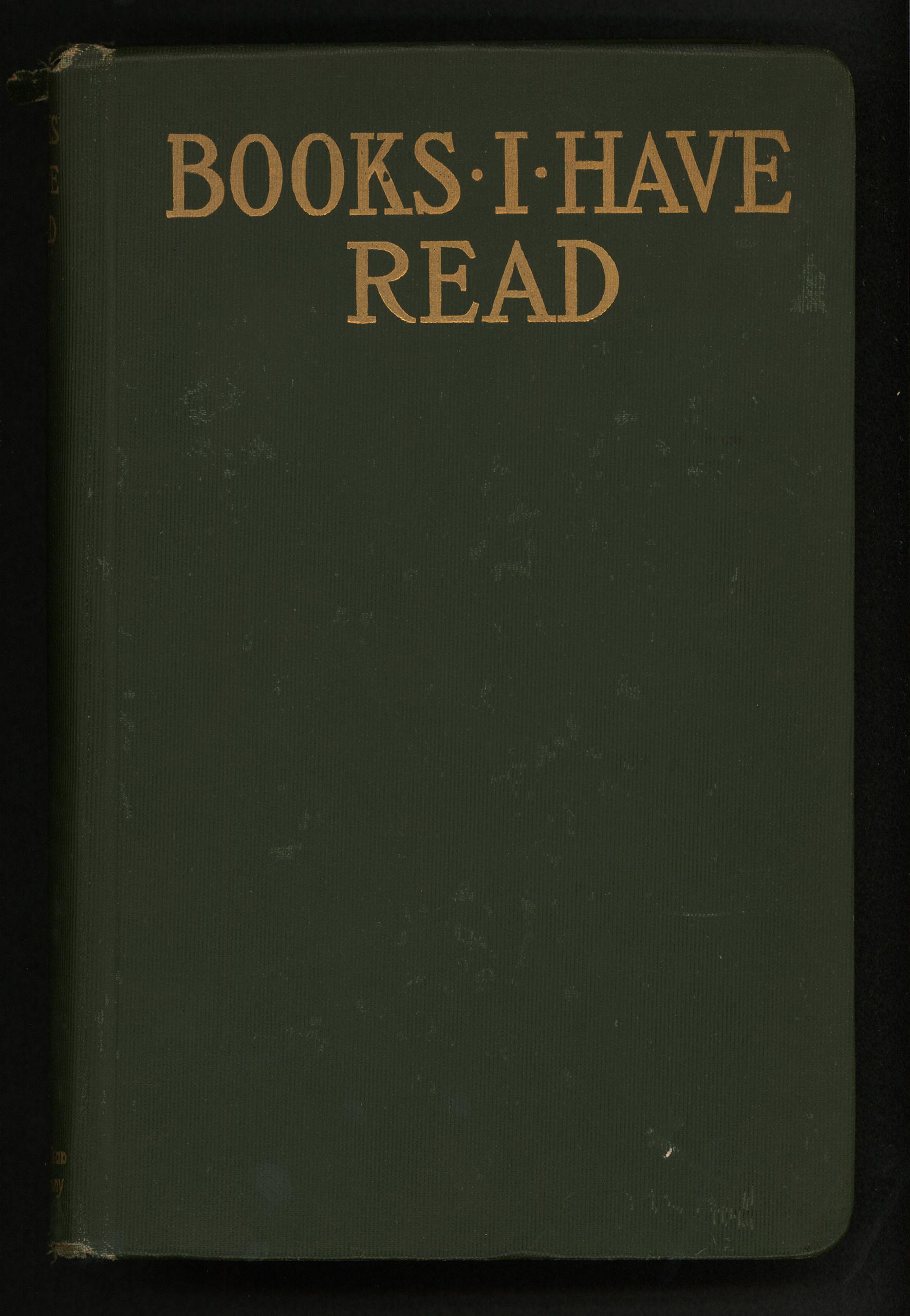 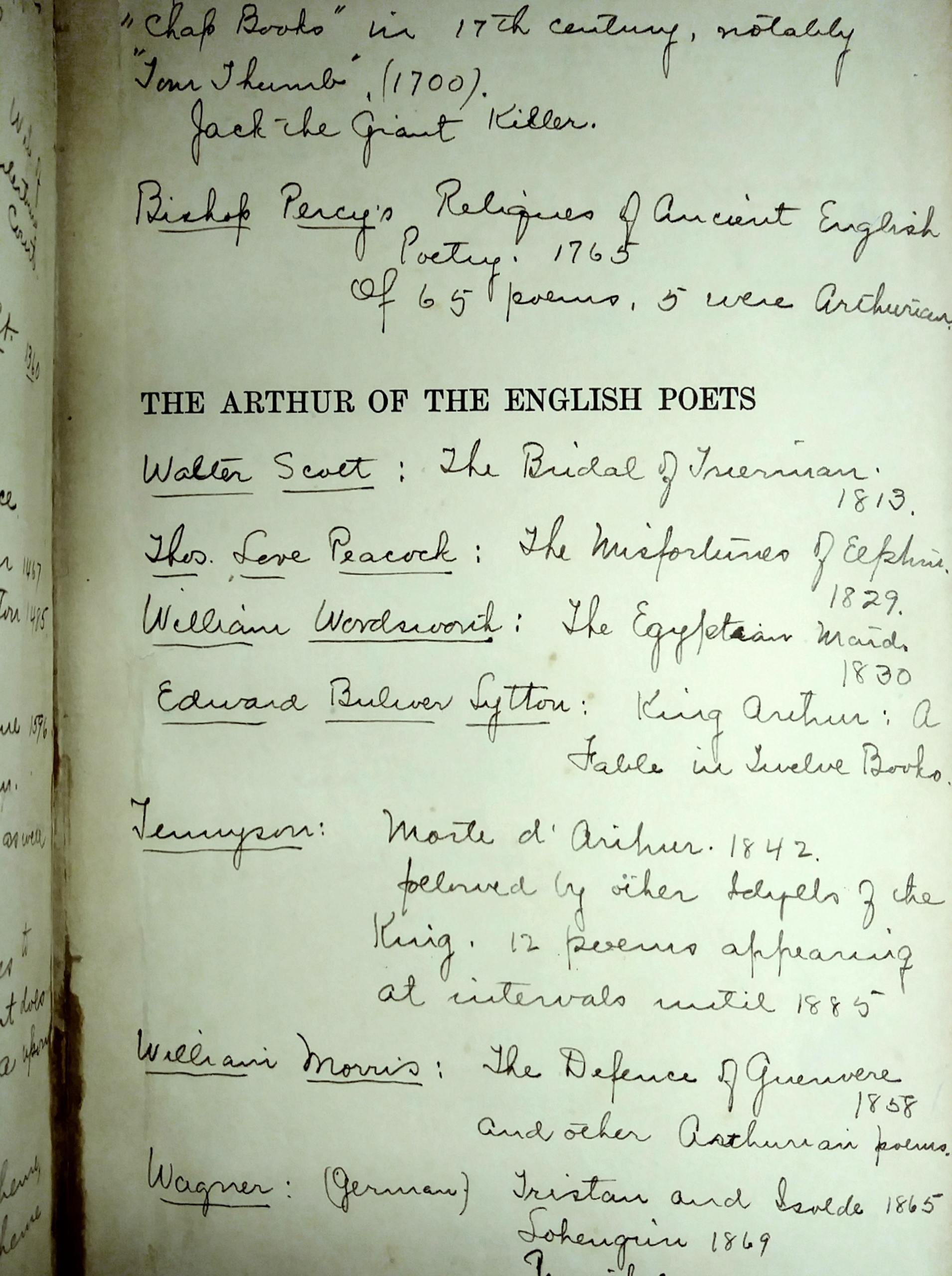 Having established her own unique poetic voice, Dunbar-Nelson was comfortable with fully embracing the classical conventions of English poetry and integrating them into her work. She brought that training to her students while helping to shape Howard High School’s English program. In addition to assigning her students works of Black literature, part of Dunbar-Nelson’s English and literature curriculum at Howard involved rigorous study of canonical Western authors. Students learned to engage critically with the works of Shakespeare, Milton, Wordsworth, and others. This copy of Dunbar-Nelson’s book on English poetry includes annotations that demonstrate dutiful scholarship in this area of study.

A recently widowed Dunbar-Nelson studied at Cornell in 1907. Her tuition, as well as the loss in salary that resulted from her leave of absence from teaching at Howard High School, were subsidized by her dear friend and romantic partner Edwina Kruse. Dunbar-Nelson would also meet some of the more influential men in her life during her time at Cornell. In addition to meeting her second husband, Henry Arthur Callis, there, she would also maintain an academic correspondence with the distinguished English literature scholar Lane Cooper. At that time, Cooper was beginning an assistant professorship. This postcard is but one example of the many collegial exchanges they shared. 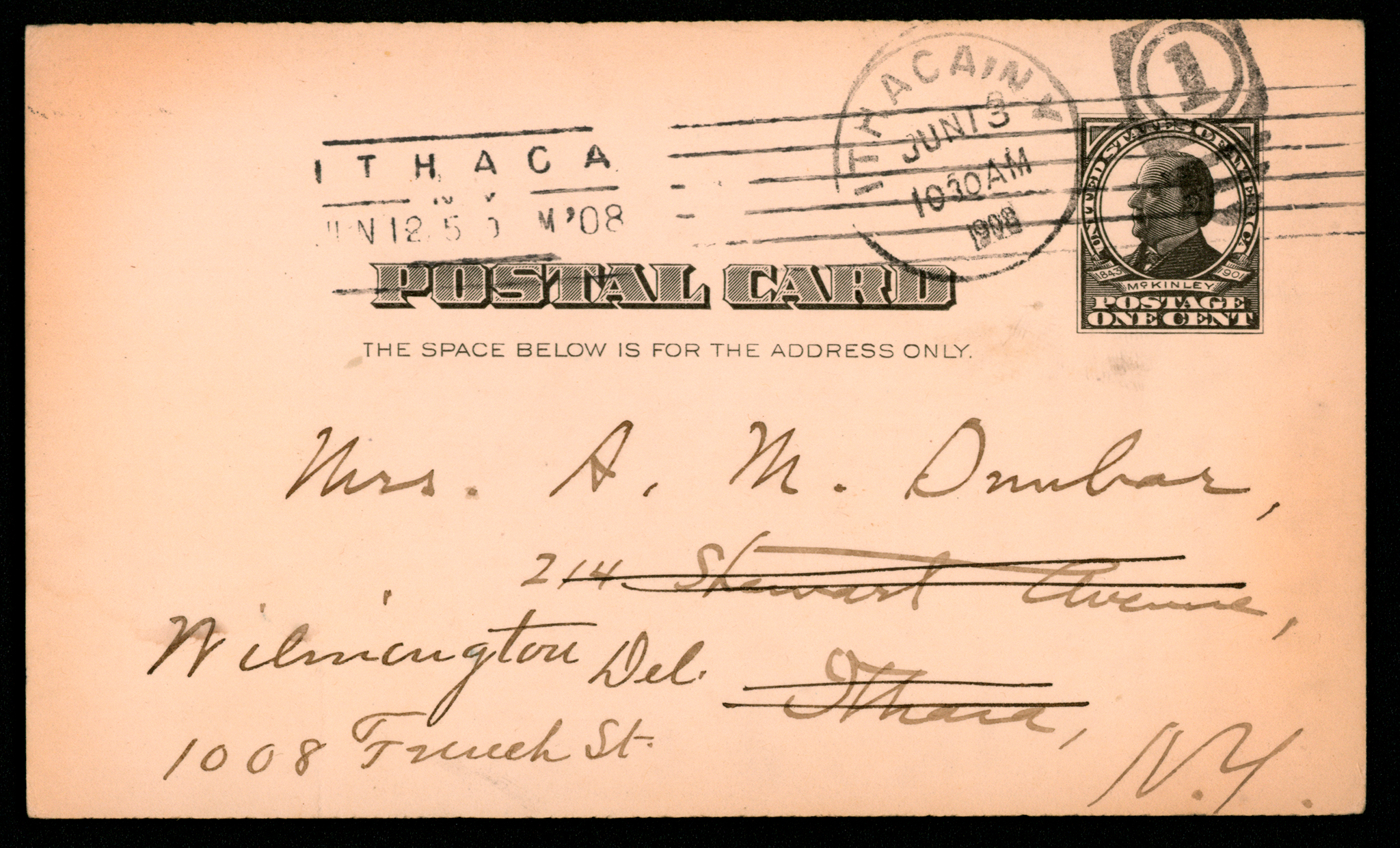 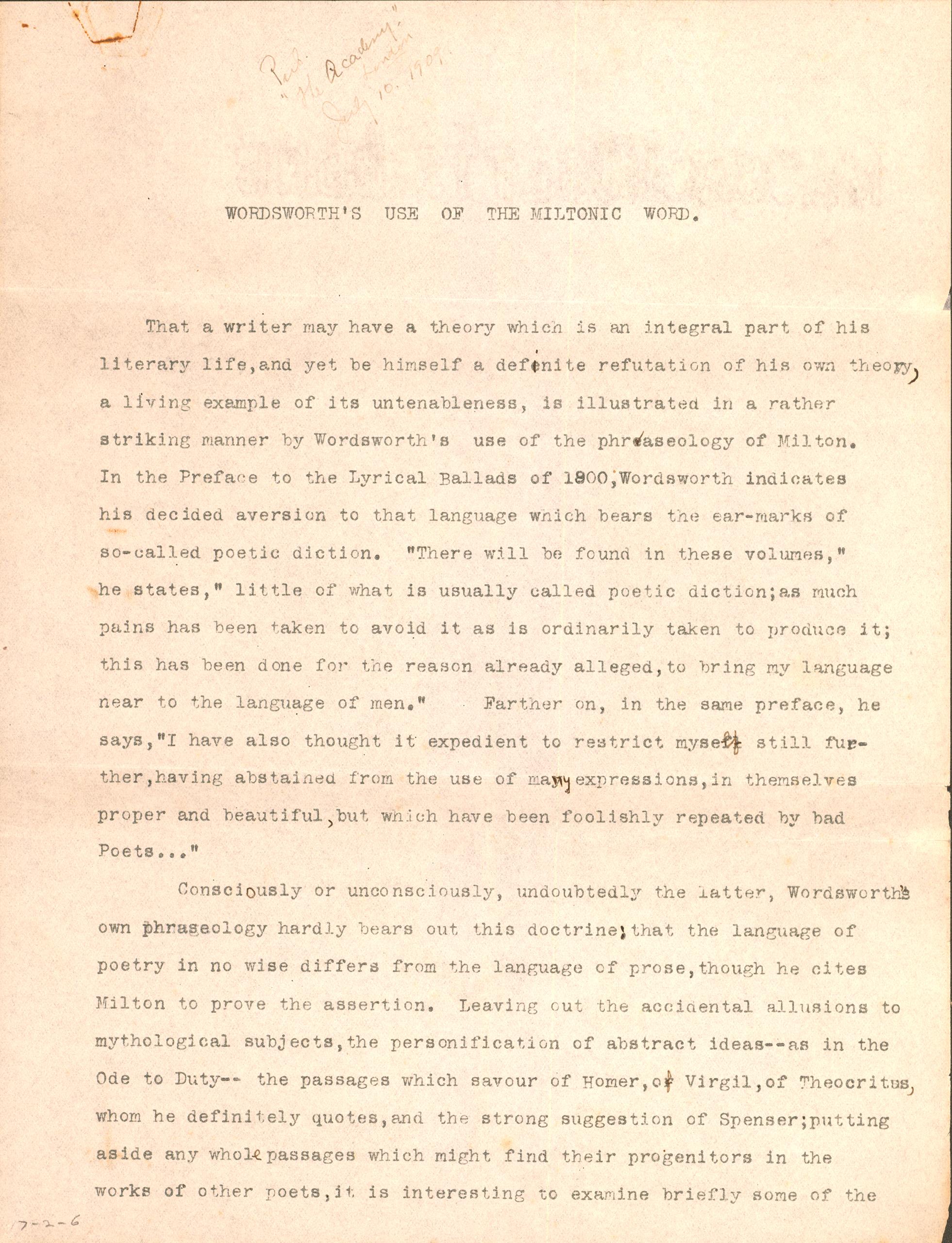 In addition to her work in fiction, poetry, and column writing, Dunbar-Nelson was an adept researcher in the field of British literature. The sophisticated degree of intertextual analysis in this typescript essay, which was later published in a prestigious UK scholarly journal, shows how Dunbar-Nelson was able to think outside the boundaries of early 20th-century literary scholarship. Convention at that time favored interpretations that were tightly constrained by chronology and periodization. For many of her contemporaries, meticulously parsing the verse of an early modern writer to arrive at a better understanding of a British Romantic would not have been as intuitive of an exercise as it would be today. The essay, moreover, provides further evidence of the guidance she had received from her academic advisor at Cornell University, Lane Cooper.

Written and produced by students in the fifth-grade class of the Industrial School for Colored Girls, this play is one of the few surviving samples of Dunbar-Nelson’s work with “delinquent” students at this all-Black reform school. 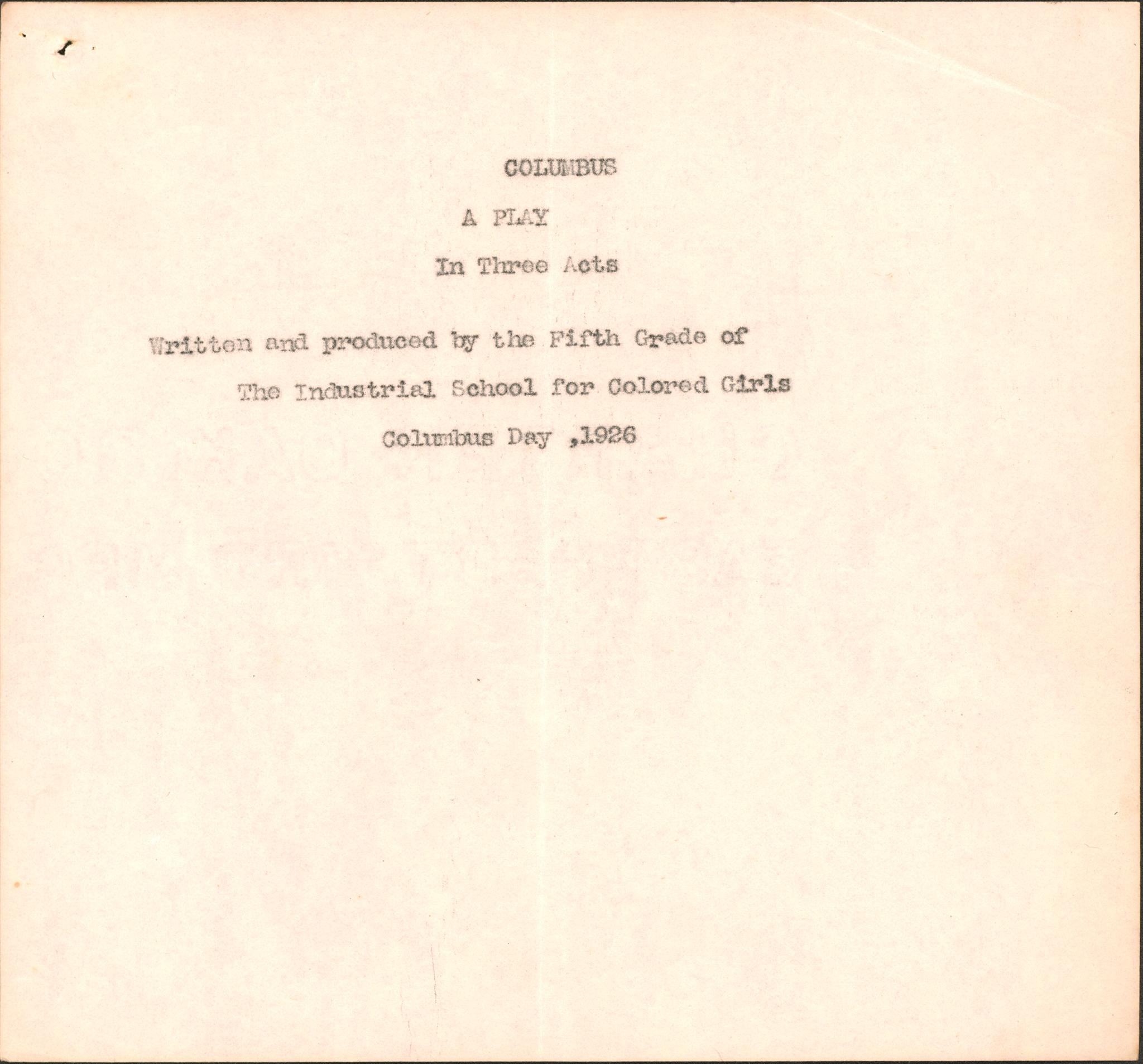 (For information about this object, see the label for object 28.)

27. Delta Sigma Theta (1913 to present), program for a Social Action Luncheon, held at the Sheraton-Charles Hotel

(For information about this object, see the label for object 28.) 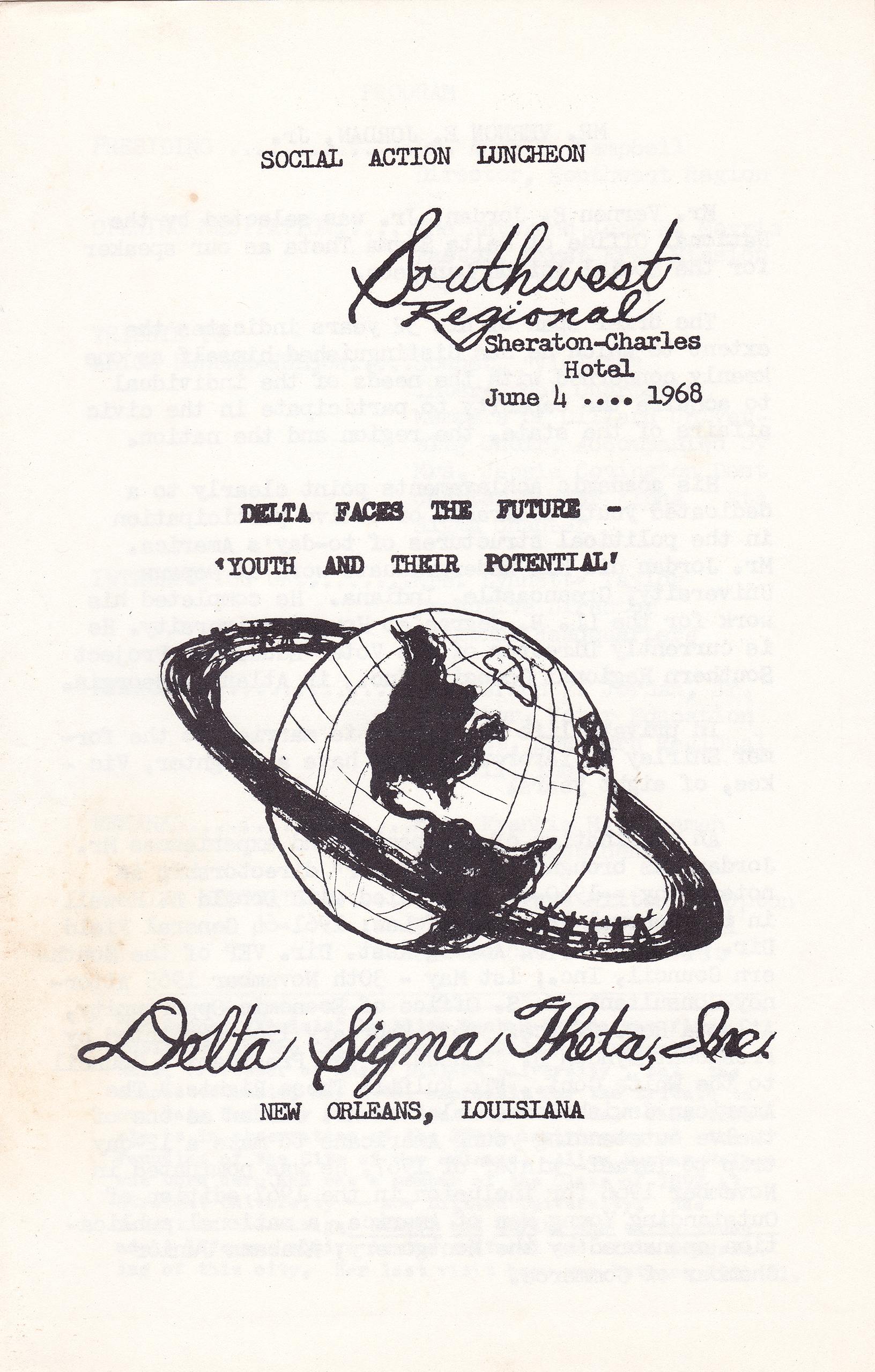 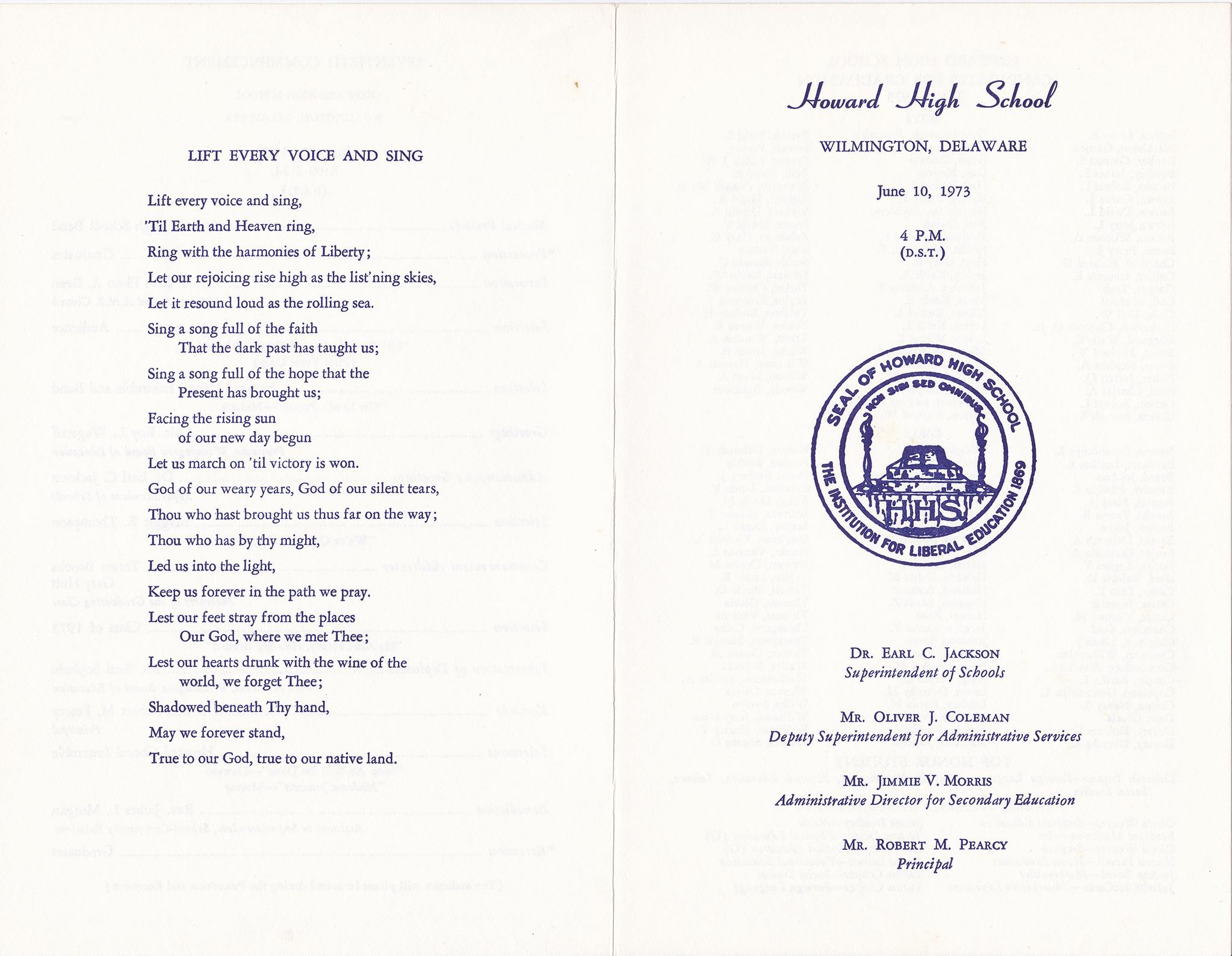 Dunbar-Nelson became an honorary member of Delta Sigma Theta Sorority following her passing in 1935. With Florence Cole Talbert, she had created the lyrics to “The Delta Hymn,” which was adopted in 1924. During the organization’s Social Action Luncheon in New Orleans in 1968, the Dillard University Choir paid tribute to Dunbar-Nelson by performing her first published sonnet, “Violets,” which appeared in The Crisis in 1919. This tribute was especially significant since Dunbar-Nelson was born in New Orleans and graduated from the city’s Straight University (now Dillard University) in 1892.

Woman Of The Press