Alice Dunbar-Nelson was a woman of the press. Her accomplishments in journalism are only now being discovered.

Woman of the Press

A Career in Journalism

FROM HER COMING OF AGE IN LOUISIANA TO THE END OF HER LIFE IN PHILADELPHIA, Dunbar-Nelson regularly wrote and edited for journals, newspapers, and magazines. In the 1890s, she was editor of the “Woman’s Column” in New Orleans’s Journal of the Lodge and briefly served as co-editor of the A.M.E. Church Review. Her Associated Negro Press syndicated columns, “Little Excursions Week by Week,” “So it Seems,” “As in a Looking Glass,” “From a Woman’s Point of View,” and “Un Femme Dit,” widely read in the Black community, were featured in such newspapers as the Washington Eagle and the Pittsburgh Courier right up through the end of the 1920s.

Dunbar-Nelson’s unique brand of essay writing, which combined criticism and social commentary, was humorously witty and a precursor to today’s ubiquitous “hot takes.” The articles, essays, and columns offer insight into the thought of the Black intellectual class, which, by any measure, was far from monolithic. 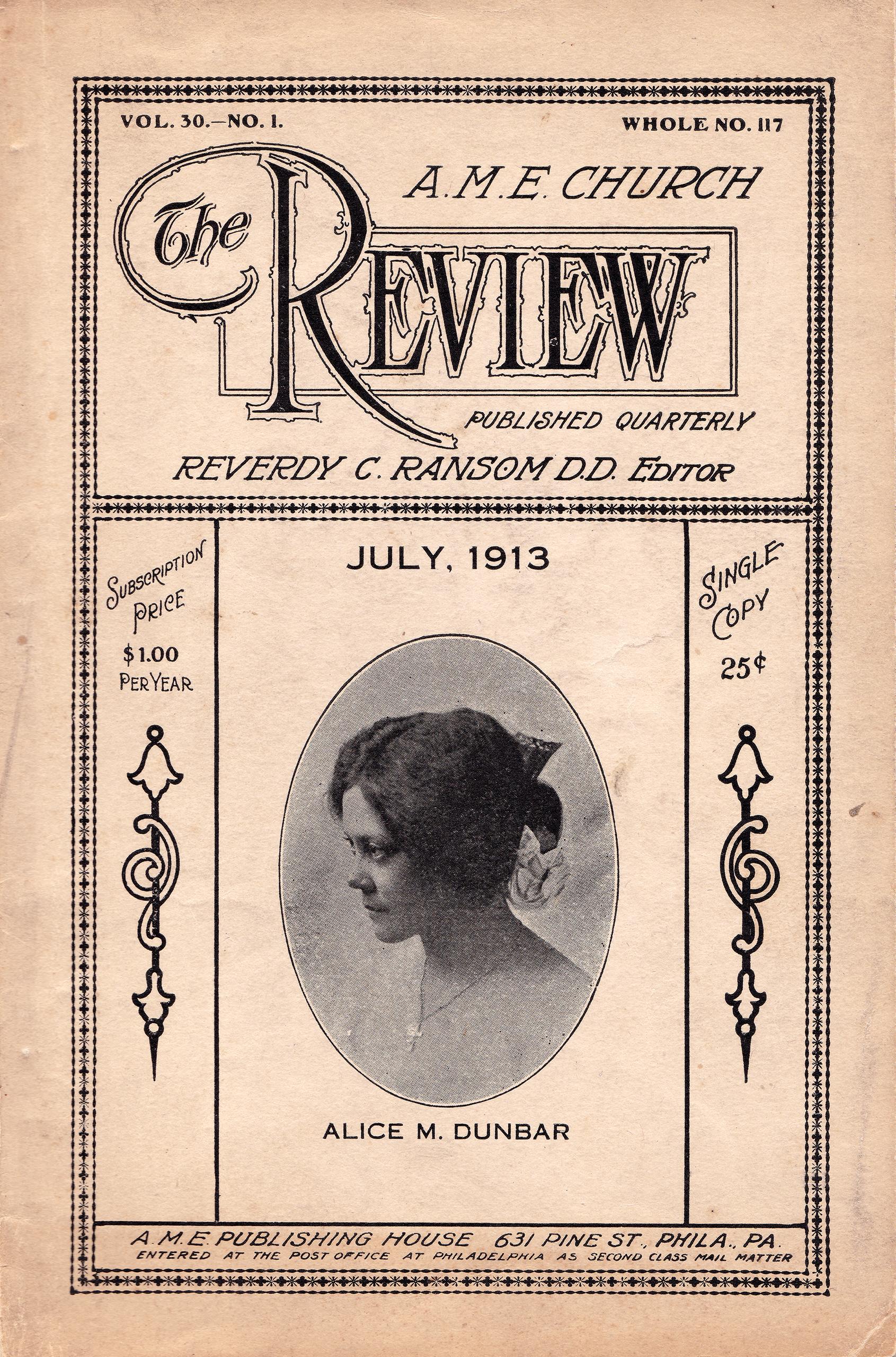 In this issue of the A.M.E Church Review, the published quarterly newsletter of the African Methodist Episcopal Church, Dunbar-Nelson’s essay “What the Church Has to Offer Men of Today” enjoys front-cover treatment complete with a photographic illustration. Her essays were published numerous times by this periodical alongside contributions from such figures as Charles Chesnutt, Fannie Barrier Williams, and Richard Robert Wright Jr. The articles from this period tackled various topics dealing with power, race, religion, and literary and artistic merit. This issue names her as joining the editorial staff, specifically charged with managing a “department of special interest to women.”

At the start of the 1920s, Dunbar-Nelson and her third husband, Robert J. Nelson, published the Wilmington Advocate—a regional newspaper focused on local politics and Black culture for Wilmington’s Black community. Unfortunately, due to a small staff, low subscription numbers, and a lack of support from investors, the operation ceased by 1922. This “flong” (a negative mold used in relief printing on a cylinder printing press) is the sole remaining artifact from that venture. It contains a typeset version of “Estevanico,” one of Dunbar-Nelson’s essays on early Black history. 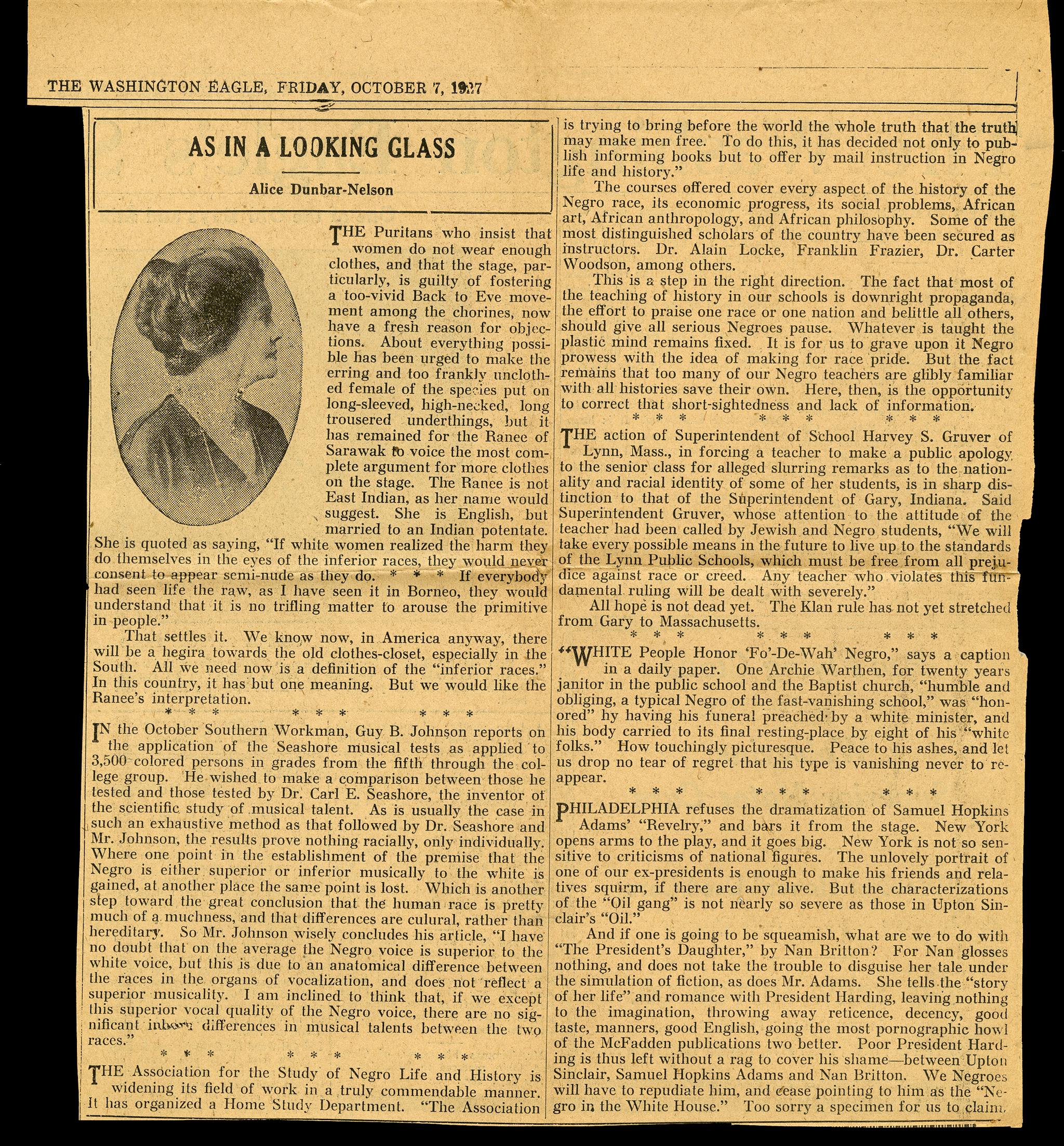 This article is a perfect example of the way Dunbar-Nelson was able to weave topics with masterful adeptness. In this column, Dunbar-Nelson touches on fashion, racism, sexism, presidential politics, musicology, and education. These were consistent threads running through her work, and the wide-ranging style of journalism she employs can be traced back to her earliest submissions for the “Woman’s Column” in the New Orleans newspaper Journal of the Lodge. In an August 18, 1894, issue, for instance, her “Woman’s Column” includes notes on other trailblazing women of color and the latest on education alongside fashion tips; news pertaining to Ida B. Wells in one segment, advice on the coordination of parasol styles in another.

More Than A Vocation