The Rosenbach Artifact Stories Blog showcases objects from the Rosenbach collection that connect to important themes in “I Am an American!” Check back often for more featured artifacts from The Rosenbach’s holdings.

FIRST PUBLISHED IN 1852, Harriet Beecher Stowe’s Uncle Tom’s Cabin became the best-selling novel of the 1800s. Only the Christian Bible sold more copies during the 19th century than did this important example of anti-slavery literature.

A member of a prominent Connecticut family, a passionate abolitionist, and a teacher, Harriet Beecher Stowe wrote Uncle Tom’s Cabin in response to the Fugitive Slave Act of 1850. The book, though a work of fiction, serves as an exposé of the evils of human enslavement. A sentimental novel grounded in religious piety, the book suggests that Christian faith could help heal the evils of enslavement. In the year following its publication, Uncle Tom’s Cabin sold 300,000 copies in the United States and 1,000,000 copes in Great Britain. The novel had tremendous political and social implications on both sides of the Atlantic. Great Britain’s Queen Victoria read the book, and Stowe famously met United States President Abraham Lincoln in 1862. It helped galvanize support for abolition in the United States.

The Rosenbach’s London edition of Uncle Tom’s Cabin was published in 1852—the year the book was first released—and features illustrations by the famed British illustrator George Cruikshank (1792–1878). Hailed as the greatest illustrator and caricaturist of his day, Cruikshank worked closely with Charles Dickens on illustrations for his famous novels. His gained early fame for his political satire, including a well-known piece that promotes anti-abolitionism. The Rosenbach holds a large collection of Cruikshank’s artworks.

In recent years, critics have noted that, despite its abolitionist message, Uncle Tom’s Cabin makes use of racist stereotypes about Black Americans and helped cement pejorative views of Black people in the nineteenth century. Those depictions are certainly echoed in the Cruickshank illustrations. Uncle Tom’s Cabin reflects the complex and intertwined attitudes toward enslavement and race relations on both sides of the Atlantic Ocean in the 1800s. 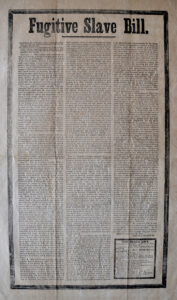 IN 1850, the United States was a rapidly expanding nation, pushing west into lands recently seized from Mexico by the Treaty of Guadalupe Hidalgo, which had ended the Mexican-American War in 1848. Yet geographic growth deepened tensions over one of the most divisive issues shaping U.S. society at the time: the enslavement of people of African descent in the South. Would enslavement expand along with the growing nation?

This question threatened the stability of the Union under the United States Constitution. That same year, Senator Henry Clay proposed a compromise that would, he hoped, preserve the republic: admit California as a free state, establish a popular sovereignty rule to allow new U.S. territories to decide for themselves if they would permit enslavement, end the trade of enslaved persons in Washington, D.C., and enact a strict law to help Southern slaveholders retrieve escaped enslaved persons from other U.S. territories. That law, called the Fugitive Slave Act, passed Congress and became law on September 18, 1850.

The copy of the act seen here is not an official government document but rather a copy that includes a “black list” of Northern representatives who voted for the bill. Generally, Northern states enforced the law’s rules. The Fugitive Slave Act fanned the flames of sectional division and convinced anti-slavery advocates of a conspiracy to spread the influence of enslavement over the United States. Only the Civil War (1861-1865) settled once and for all that human enslavement has no place in a republic founded on the principle of civic equality. 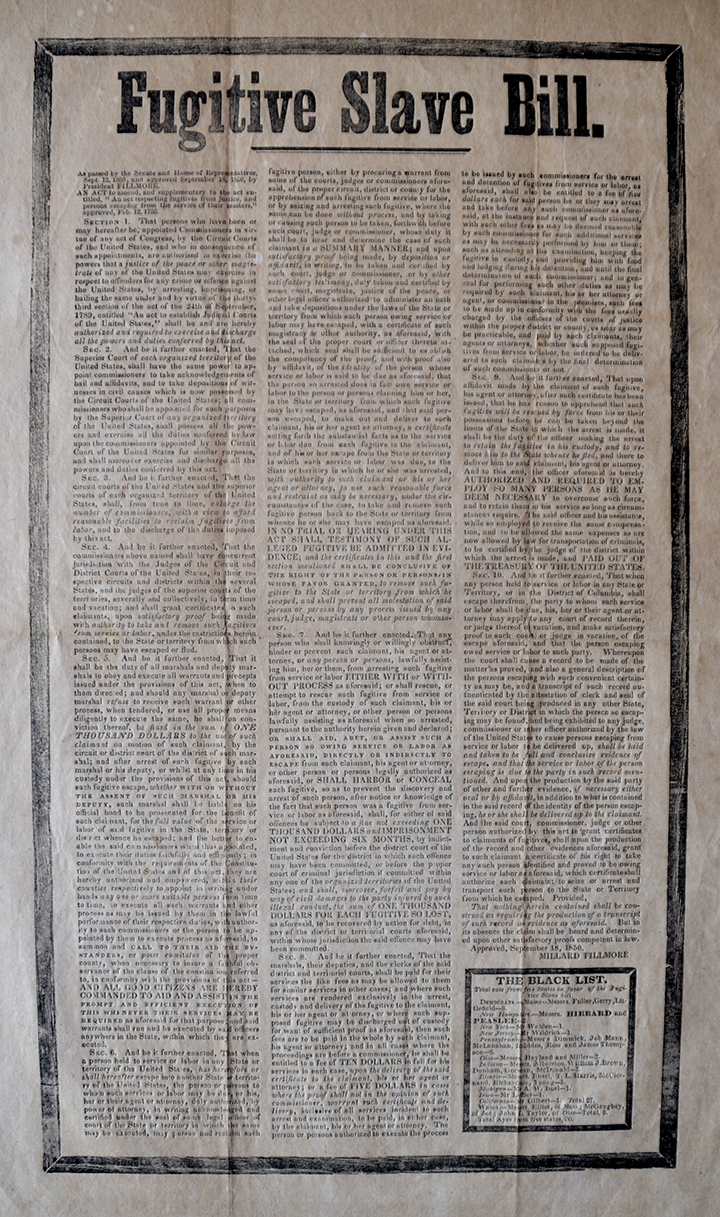 Ignatius Sancho and the Global History of Enslavement and Abolitionism

Matisse at The Rosenbach