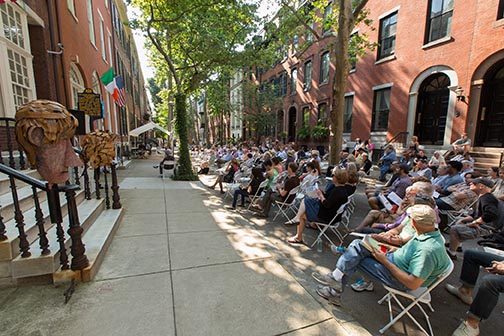 Join us on beautiful Delancey Place for the Rosenbach’s annual Bloomsday celebration on June 16, the day the world celebrates Leopold Bloom’s fictional journey through the streets of Dublin, as imagined in James Joyce’s epic Ulysses. Lauded as the greatest novel of all time, Ulysses has been called everything from masterfully moving to hilariously obscene. The Rosenbach’s rollicking recital features celebrity readers including Michael Toner and Drucie McDaniel and singers from the Academy of Vocal Arts.

Bloomsday at the Rosenbach 2017 Reader Schedule

Bloomsday is free and open to everyone. Ulysses enthusiasts and novices alike can drop by Delancey Place anytime during the day to enjoy everything Bloomsday has to offer, including:

University of Pennsylvania Department of English