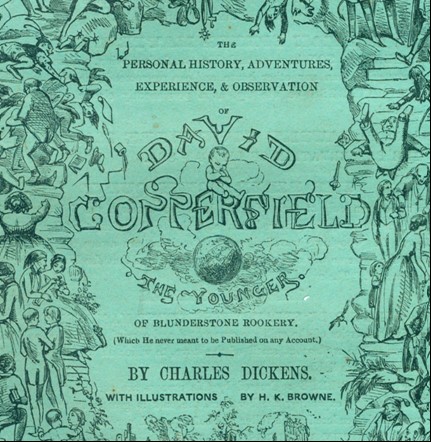 “Like many fond parents, I have in my heart of hearts a favourite child. And his name is David Copperfield.” – Charles Dickens.

Copperfield is variously called Davy, Trotwood, Brooks of Sheffield, Mas’r Davy, Master Murdstone, Master Copperfield, Daisy, Mister Copperfield, Mr Copperfull and Doady – a different name for every familial situation. Only by writing his own account can he become David Copperfield. We will consider this great novel from the point of view of the fond parent and the favourite child, always bearing in mind that DC’s initials are a reversal of CD’s.

Copperfield was Dickens’ eighth novel and its full title – “The Personal History, Adventures, Experience and Observation of David Copperfield the Younger of Blunderstone Rookery (Which He Never Meant to Publish on Any Account)” – is vital to a fuller understanding of Dickens’ intentions, as is the fact that the novel was originally serialized, from May 1849 to November 1850, in twenty separate parts, only making its entrance as the massive single volume we’re used to today once the serial had ended. How did the serial publication effect Dickens’ roll-out of the narrative?

We will also be referring to various filmic adaptations – from the Cukor-directed 1935 Hollywood classic to Armando Iannucci’s version, currently in cinemas – as a lens on the novel’s changing social appeal.

Wesley Stace was born in Hastings in 1965. Since 1988, he has released many albums under the name John Wesley Harding – his most recent, 2018’s Wesley Stace’s John Wesley Harding, with the Jayhawks as his backing band – and recorded duets with, among others, Bruce Springsteen, Lou Reed and Rosanne Cash. He has published four novels, including the international bestseller Misfortune, and he co-wrote Mark Morris’ 2019 memoir Out Loud. He has taught his course Novel Beginnings at Swarthmore and Fairleigh Dickinson; whereas at Princeton he taught a course in song and lyric-writing with the poet Paul Muldoon. He also created John Wesley Harding’s Cabinet of Wonders, a monthly show that plays at New York City’s City Winery. The New Yorker called it “one of the finest nights of entertainment this city has to offer.” He lives in Philadelphia.