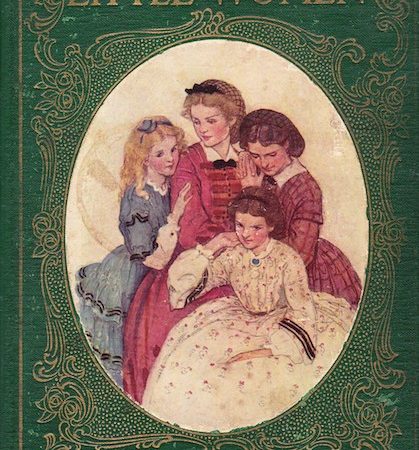 “Never liked girls, or knew many, except my sisters.”

So begins, in a single line in Louisa May Alcott’s private journal, the enduring paradox that is Little Women, perhaps the most beloved book about girls ever written. Undertaken by Alcott at the request of a publisher, motivated by her own financial needs, the story she called “The Pathetic Family” was written in three months (the second part, originally published separately as Good Wives, came the following year), some claim because she found it dull and distasteful and simply wanted to be done with it, others that, unwittingly and unwillingly falling into the story of four girls she loved, she was consumed to the point of not being able to set down her pen. The truth? Do we need to know?

What we do know is that Little Women is estimated to still be selling a thousand copies every month; has never been out of print; has spawned eight feature films, at least as many dramatic stage plays and television productions, an opera, a Broadway musical, and two Japanese anime series. Simone de Beauvoir, Ursula Le Guin, Patti Smith, and J.K. Rowling have all been openly inspired by Alcott and the Marches.

Something about this book has made it not just iconic, but canonical: for many, the story about growing up, whether from child to adult, or girl to woman. It has been hailed as a deliberate paean of domestic sentimentality, and as a quiet rant against gender inequity. Literary critics often refer to it as seminal protorealist, or protofeminist fiction. Which might mean everything to someone reading the book in a scholarly fashion, and perhaps nothing to some reading it in a joyful one. In this course, we meet, literally, somewhere in the middle: at The Rosenbach, where the love of literature meets the importance of literature, with the goal of finding that point where the meaning we derive from Little Women meets the love we feel for it. (Or, perhaps…do not find or feel.)

Over our four sessions, we will read Little Women, a selection of Alcott’s short writings, and some essays about the phenomenon that is her best-known work. We will discuss why Little Women endures, is so beloved, and why, perhaps, such devotion is best viewed through a critical lens.

Previous knowledge of Little Women is not necessary. It’s enough that you’ve come to it now.

Melissa Jensen is a Lecturer in English at the University of Pennsylvania, where she specializes in Children’s and Adolescent Literature.