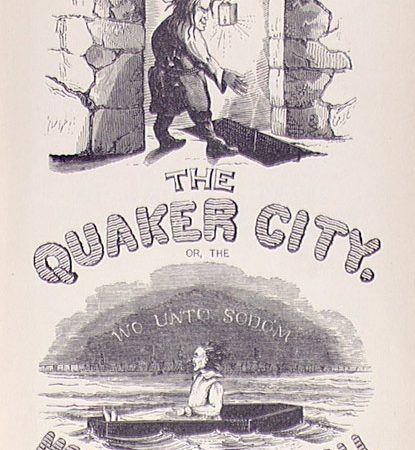 Philadelphia in the Early Republic was a city of high culture in the arts, sciences, publishing and government. Founded upon the Quaker principles of William Penn, the city fostered the revolutionary movement and became the cradle for the documents that would shape America’s government. More than one traveler referred to Philadelphia as the Athens of America. Yet another Philadelphia lurked in the pages of novels and magazines, a seeming paradox to its democratic ideals: Philadelphia Gothic.

Charles Brockden Brown transformed a strictly European genre of literature into a distinctly American nightmare of the terrors that lurked beneath our democratic ideals. While European Gothic focused on the haunting and corrupting sins of their past, Brockden Brown’s Gothic was about what one scholar called, the “individual potential for evil in a new society.” Just as American citizens have the right to life, liberty and the pursuit of happiness, American Gothic tells us that we also have the potential for death, murder and pursuit of destruction. American Gothic is about the criminal element. European Gothic is haunted by specters and mad monks. In America we at the mercy of serial killers. And Philadelphia became the crucible for this very American version of the Gothic that continues in the many strains of Horror fiction and film today.

In this course, we’ll explore the works of these authors — Charles Brockden Brown, Robert Montgomery Bird, George Lippard, Edgar Allan Poe, and Frank J. Webb — and see how they were inspired to look beneath the veneer of American democracy and expose our deepest fears.

Included in this course is a lecture and tour at Laurel Hill Cemetery on May 14.

Edward G. Pettit is the Philly Poe Guy and his work on Poe has garnered national attention and resulted in several Poe-themed events, from literary debates to full-scale dramatic productions, and has been featured on television, radio and in print, including the New York Times. Pettit is the Sunstein Manager of Public Programs at The Rosenbach where he has also taught courses on many authors and subjects, including Edgar Allan Poe, Jane Austen, Charles Dickens, and mystery and suspense fiction.  When not attending Moby-Dick Marathon Readings, he can usually be found at literary-themed cocktail parties.

Revisit beloved classics or experience new ones with Rosenbach courses. Book lovers delve into fiction, history, and poetry with the guidance of a literary expert and the company of other readers. Tuition varies according to length of the course; Rosenbach members at the Contributor level and above receive a 10% discount on tuition.