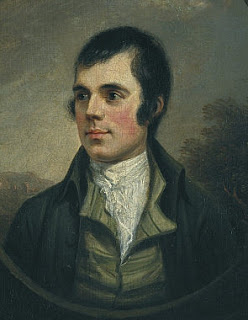 On January 25th, people from Edinburgh to Philadelphia to Shanghai gather to toast “the immortal memory” of Robert Burns.  For he is not only Scotland’s national poet; his work has been translated into Hebrew, Russian, Chinese, Esperanto, and a host of other languages. To discover the range and depth of the work that has established Burns as a poet of global significance, we will dive into his poetry and letters, drawing significantly on one of the world’s finest collection of his works—the Rosenbach’s.

We will go far beyond the Burns of “My Love is Like A Red Red Rose”—though we’ll study that great poem, too, and what it means that it’s very difficult to tell what Burns actually added to the traditional lyrics he collected.  This is part of a larger question of how he balances the competing claims of the singular bard with the collective voice of Scottish song, and we will situate his work within a growing interest in the collection of traditional songs and folklife in the songbooks he helped to edit and in his masterpiece, Tam O’Shanter. We will also juxtapose “Red Red Rose,” “Wilt Thou Be My Dearie,” and other tender love songs with his bawdy ones, such as “The Fornicator.” We will consider how the politics of sex and gender in poems like these speak to the roiling national politics of his day in “Is there for honest poverty” and other poems. There, we will see how Burns negotiates the dangers of voicing subversive views amidst the backlash against the French Revolution and his quest to find and hold on to gainful employment. We will consider his relationship to an emerging British imperium in which Scots were over-represented in poems such as “On a Scotch Bard Gone to the West Indies” as well as to a growing interest. Finally, we will consider how Robert Burns comes to be BURNS, from his initial self-presentation and the earliest reviews to the canonization of him that led A. S. W. Rosenbach to acquire, sell, re-acquire, and re-sell his works.  While Burns’ own texts will be at the heart of our studies, they will be supplemented by other primary texts and secondary ones.

Along the way, we will make sure we enjoy Burns, paying attention to his remarkable craft, the keen edge of his wit, and the wide range of his sympathy.   So don’t “gang agley”; join us at the Rosenbach for Burns!

Steve Newman is Associate Professor of English at Temple University, where he was won multiple teaching awards.  Robert Burns figures centrally into his book, Ballad Collection, Lyric, and the Canon: The Call of the Popular from the Restoration to the New Criticism (Penn Press), a recent article in Global Romanticism (Bucknell University Press), and his book-in-progress, Time for the Humanities:  Competing Narratives of Value from the Scottish Enlightenment to the 21st Century Academy. Recently, he taught a graduate seminar on Burns and Adam Smith at the Southwest University for Nationalities in Chengdu, China. He is editing The Gentle Shepherd as part of the Edinburgh University Press edition of The Works of Allan Ramsay and is heading up a digital humanities project on The Beggar’s Opera. He serves as the President of Temple’s faculty union, the Temple Association of University Professionals (AFT #4531).

In the event of inclement weather, the Rosenbach will announce any closures on rosenbach.org. Please call 215-732-1600 x0 if you have questions about program status.