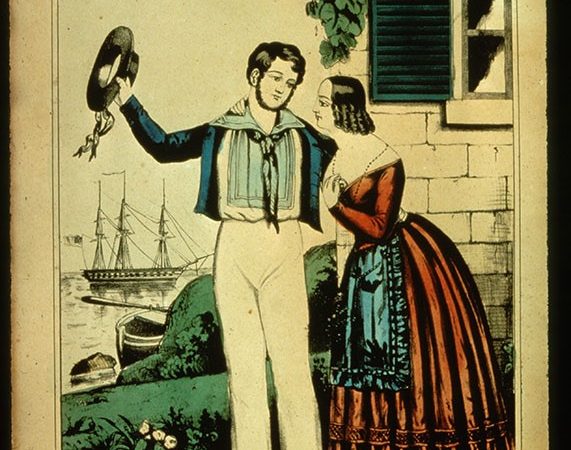 There are very few female characters in Melville’s Moby-Dick. Captain Ahab did have a wife. But she never appears in person and she’s mentioned just twice in the whole novel, both times as a symbol of the emotional ties Ahab abandoned when the Pequod set sail. In this lecture, Dr. Norling will discuss why and at what cost Melville and other maritime chroniclers overlooked an essential part of the story: the women, families and communities onshore. Adjusting our view to include those left behind allows us to examine the multiple ways the whaling industry relied upon their unpaid labor, and also to recover human stories every bit as poignant and universally resonant as those of the men at sea.

Pictured: The Sailor’s Adieu.” There were many versions of the popular image, sometimes paired with a second image titled “The Sailor’s Return,” including a widely distributed series by Currier & Ives. This particular lithograph dates from ca. 1845 and was produced by Baillie and Sowle of New Bedford, MA. Courtesy of Old Dartmouth Historical Society-New Bedford Whaling Museum (Trans. 785).

Dr. Lisa Norling recently retired from the History Department of the University of Minnesota, where she taught a variety of courses and worked with a variety of students in early American history, comparative women’s history, early modern Atlantic world, and gender studies. She continues to work with area high school teachers on the pedagogy of the U.S. History survey. Her research has focused on the gender dynamics and women roles in maritime communities, beginning with the American whaling industry in her award-winning book, Captain Ahab Had a Wife: New England Women and the Whalefishery, 1720-1870. Her current projects include a comparative review of women’s participation in early modern fisheries worldwide and a microhistorical study of the misadventures of a bigamous whaling captain from New Bedford to Lahaina to the Bering Strait, 1858-62.

Sponsored by Jacqueline and Eric Kraeutler.