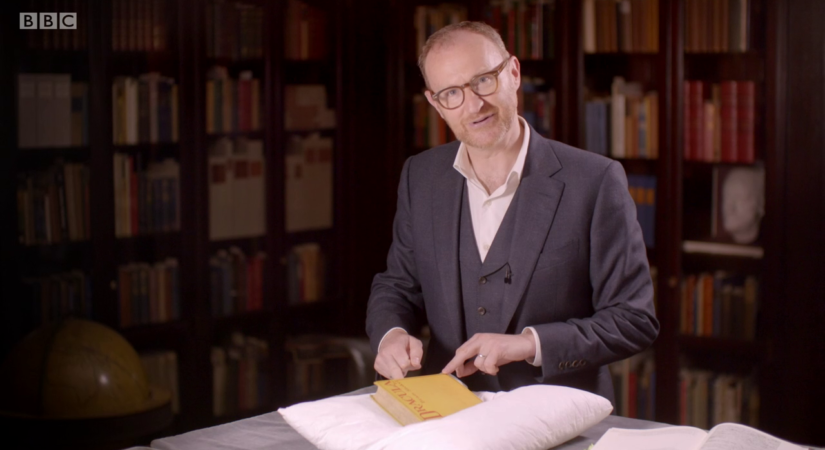 Join us for a very special Q&A with Mark Gatiss, co-creator of the new BBC Dracula. Mark will join Sundays with Dracula host Edward G. Pettit to chat about his lifelong interest in the most famous vampire of all-time and answer your questions live.

Make sure you include your email with your registration, so we can add you to the online webinar. You will receive an email from Zoom with your link to the program.

Mark Gatiss also presented the TV documentary In Search of Dracula for the BBC, in which he visited The Rosenbach to study Bram Stoker’s Notes for Dracula. In 2016, Mark Gatiss played Dracula in Big Finish’s full cast audio drama of the novel and recently returned in the role for Big Finish’s prequel Dracula’s Guests and sequel Dracula’s War.

Mark Gatiss has had a long and varied career as a writer and producer behind the camera, as well as being a critically acclaimed actor and published author. He had a childhood passion for Doctor Who and has written for the modern revival since 2005. He was also the writer and executive producer of An Adventure in Space and Time, a 90-minute dramatization of the genesis of the series as part of the show’s 50th anniversary celebrations in 2013. He also appeared alongside Peter Capaldi as The Captain in the 2017 Doctor Who Christmas Special Twice Upon a Time.

Gatiss is the co-creator and executive producer of Sherlock, the hit BBC series starring Benedict Cumberbatch and Martin Freeman, which has seen unprecedented global success and in which he also plays Sherlock’s brother Mycroft Holmes. The show has won a total of nine Emmys and twelve BAFTAs across its four series.

Mark’s other writing credits for television include the ghost story miniseries Crooked House (2008) which he also executive produced, two episodes of Agatha Christie’s Poirot, his adaptation of H. G. Wells’ The First Men in the Moon (2010) and all three episodes of the documentary series A History of Horror (2010) and its one-off sequel Horror Europa (2012), all of which he presented as well.

Gatiss also resurrected the Ghost Story for Christmas programs, with television adaptations of M.R. James’ The Tractate Middoth (2013) and Martin’s Close (2019), as well as the original The Dead Room (2018) and the M.R. James documentary The Lost Ghost Story (2013)