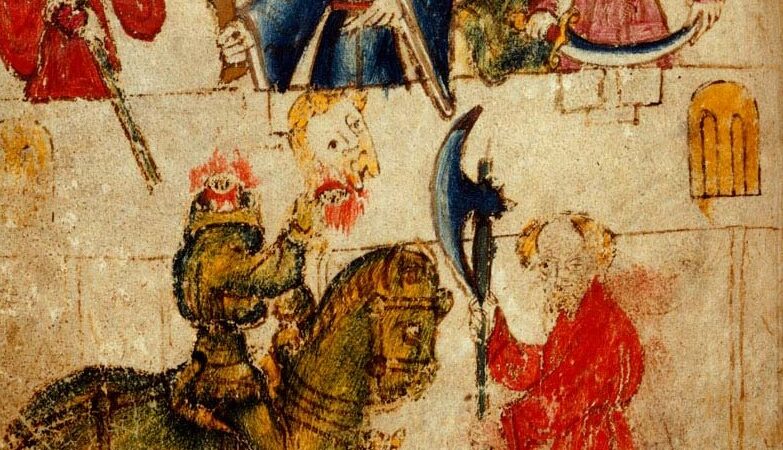 This course is sponsored by Allen and Judy Freedman

Sir Gawain and the Green Knight is one of the greatest poems in the English language, a story of adventure, sexual opportunity, and great psychological subtlety. It has often been translated, most recently by Simon Armitage, CBE, FRSL, Poet Laureate (2018), and there is a film version from 2021 starring Dev Patel as Gawain. But to truly appreciate the magic of Sir Gawain we must read the original, written in a regional, alliterative meter from the later fourteenth century. This is challenging, but not daunting, and the rewards are great. For there were two rival strands of English poetry in England after the disastrous plague of 1348: one, the Chaucerian, became the mainstream, London-based tradition; the other, that of Sir Gawain and Piers Plowman, is now much less known. Sir Gawain survives in only one manuscript, now in the British Library, and that barely escaped a disastrous fire in 1731.

Sir Gawain and the Green Knight was a poem made to be read out loud, maintaining a beautiful, distinctive rhythm– and so we will devote considerable time to letting the poem “breathe” or be heard in our classroom. The structure is ingenious, in four parts or “Fitts,” and so we will worm our way into the poem over four classes. The verse form, alliterative meter, looks back to Beowulf and forward to experimental poets such as Gerard Manley Hopkins. And the vocabulary draws on a remarkable range of Anglo-Saxon, Norse, Latin, French and other sources. The language adapts itself remarkably to scenes of feasting, beheading, travels in wild terrain, hunting (of deer, boar, and fox), more feasting, seduction and, ultimately, judgement and homecoming. The poem comes full circle, with the fall of Troy and the passing of a natural year, but we find that “the forme to the fynismente foldes ful selde” (the beginning [of an adventure, of a life] rarely matches the end).

Everyone is invited to join this four-part, autumnal Gawain adventure. Some prior familiarity with Chaucer will help, but is not required. The best way to meet the poem for the first time is via James Winny’s parallel text edition, and I’ll be using that, but there are many other editions (including Armitage, J.R.R. Tolkien). And for more on the poem and its manuscript see https://www.bl.uk/collection-items/sir-gawain-and-the-green-knight

David Wallace, sometime President of the Medieval Academy of America, has been Judith Rodin Professor of English and Comparative Literature at Penn, where he regularly teaches courses on Dante Alighieri (1265-1321) and his afterlife, since 1996. He is also Director-in-Chief of Bibliotheca Dantesca. His most recent book is Chaucer: A Very Short Introduction (Oxford University Press, 2019) and in 2019 was awarded the Sir Israel Gollancz Prize by the British Academy. For the Rosenbach, David Wallace has taught courses on Dante and Chaucer.