Nobel Prize winners Albert Einstein and Thomas Mann were among the thousands of Germans who successfully fled Nazi persecution in the 1930s. They settled in America and each contributed manuscripts to a 1938 book auction chaired by Dr. Rosenbach to benefit other refugees. Both men signed the catalog seen here.

Rosenbach secured donations from luminaries such as Irving Berlin, Robert Frost, and Louis Brandeis. Talkative celebrity auctioneers slowed the auction, leaving many lots unsold and necessitating a later private sale. Despite the Depression, the event raised $35,000 for the Joint Distribution Committee and the Committee for Christian Refugees. 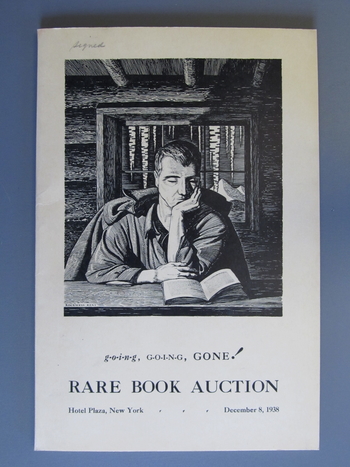 Past exhibition: In the Beginning