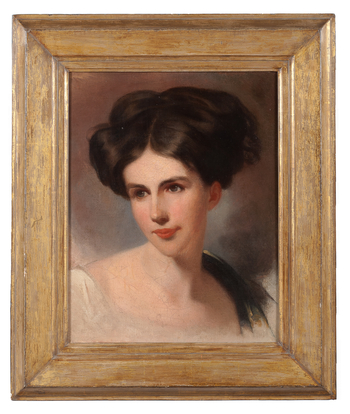 Maria Cecil Gist Gratz was the first wife of Benjamin Gratz. The couple lived in Lexington, Kentucky, but had their portraits painted by Thomas Sully in 1831 while on an extended visit to visit Benjamin’s Philadelphia relatives. They also had Sully paint a portrait of Benjamin’s sister Rebecca to bring back home with them.

The Rosenbach has owned the portraits of Benjamin and Rebecca for decades, thanks to the generosity of Benjamin’s granddaughter, Mrs. Henrietta Gratz Clay. A portrait of Maria donated by her great-great-great-granddaughter Maria Gratz Roberts in 2011 was initially believed to be the companion to Benjamin’s portrait. However, press coverage surrounding the acquisition led the owner of this portrait, the great-great-grandson of Benjamin Gratz, to contact the Rosenbach. It is now clear that this signed and dated painting is the original 1831 version, with the other painting being a later copy, also produced by Sully. The opportunity to reunite this portrait with both its companion and its later copy is truly remarkable.