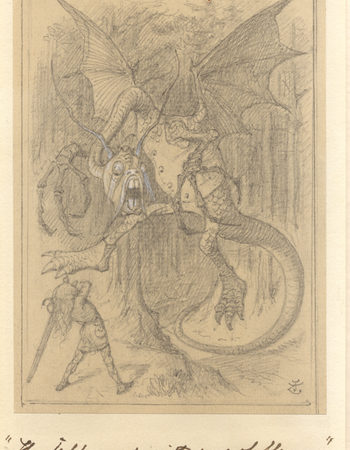 The poem Jabberwocky was begun by a 23-year-old Lewis Carroll in 1855—the first stanza appeared that year in Mischmash, a private periodical he circulated among his family. The completed poem did not appear until 1871, in Through the Looking Glass, for which this illustration was drawn. Although this drawing lacks some definition, especially in the background forest, it is quite similar to the final printed version, except for being reversed. The poem itself has become one of the most famous nonsense poems in the English language and several of its made-up words, such as “chortled,” have actually entered the English language.