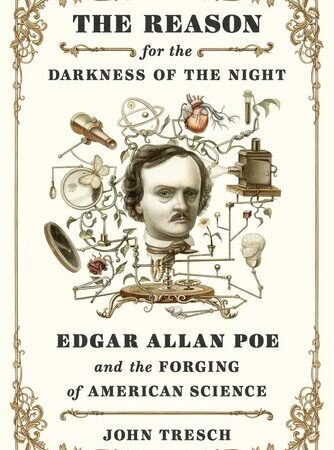 In this joint virtual program with the Science History Institute, John Tresch will join us from England to talk about his new book on Edgar Allan Poe’s obsession with scientific practice and discovery in 19th Century Science.  We’ll also share relevant items from our collections.

The Reason for the Darkness of the Night: Edgar Allan Poe and the Forging of American Science is an innovative biography of Edgar Allan Poe—highlighting his fascination and feuds with science.

Decade after decade, Edgar Allan Poe remains one of the most popular American writers. He is beloved around the world for his pioneering detective fiction, tales of horror, and haunting, atmospheric verse. But what if there was another side to the man who wrote “The Raven” and “The Fall of the House of Usher”?

In The Reason for the Darkness of the Night, John Tresch offers a bold new biography of a writer whose short, tortured life continues to fascinate. Shining a spotlight on an era when the lines separating entertainment, speculation, and scientific inquiry were blurred, Tresch reveals Poe’s obsession with science and lifelong ambition to advance and question human knowledge. Even as he composed dazzling works of fiction, he remained an avid and often combative commentator on new discoveries, publishing and hustling in literary scenes that also hosted the era’s most prominent scientists, semi-scientists, and pseudo-intellectual rogues. As one newspaper put it, “Mr. Poe is not merely a man of science—not merely a poet—not merely a man of letters. He is all combined; and perhaps he is something more.”

Taking us through his early training in mathematics and engineering at West Point and the tumultuous years that followed, Tresch shows that Poe lived, thought, and suffered surrounded by science—and that many of his most renowned and imaginative works can best be understood in its company. He cast doubt on perceived certainties even as he hungered for knowledge, and at the end of his life delivered a mind-bending lecture on the origins of the universe that would win the admiration of twentieth-century physicists. Pursuing extraordinary conjectures and a unique aesthetic vision, he remained a figure of explosive contradiction, gleefully exposing the hoaxes of the era’s scientific fraudsters even as he perpetrated hoaxes himself.

Tracing Poe’s hard and brilliant journey, The Reason for the Darkness of the Night is an essential new portrait of a writer whose life is synonymous with mystery and imagination—and an entertaining, erudite tour of the world of American science just as it was beginning to come into its own.