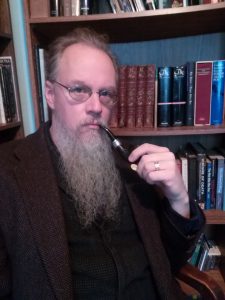 The Rosenbach is pleased to announce the appointment of Edward G. Pettit as its new Manager of Public Programs. Known to many local literature lovers as the “Philly Poe Guy,” Edward G. Pettit has been a writer, a book reviewer for the Philadelphia Inquirer, and a professor at La Salle University for the last ten years. Recently, he was a featured commentator in an episode of Philadelphia: The Great Experiment, which focuses on life in the city in the 1840s. In 2012, he was the Charles Dickens Ambassador for the Free Library of Philadelphia’s Charles Dickens bicentenary celebrations. Pettit has led reading groups for the Rosenbach on Edgar Allan Poe and Jane Austen, and he has appeared at numerous cultural institutions, including the Rare Book Department of the Free Library of Philadelphia, the Mütter Museum, and the Ebenezer Maxwell Mansion, where he has performed a Dickens reading every December.

In addition to his extensive knowledge of 19th-century literature, Edward G. Pettit brings a commitment to increasing and diversifying the programs at the Rosenbach. “I’m very interested in developing what I like to call ‘the reader experience,’” says Pettit. “My goal is to use programs to connect customers with our collection here and also the collection at the Free Library. I want to bring people together to read deeper and think deeper.” He also looks forward to introducing a broader scope of creative, intellectual, and artistic interests to public programs, making the Rosenbach’s literary treasures accessible and engaging to a wider audience.