This year Bloomsday fell on a Sunday, and not just any Sunday, it was also Father’s Day. In the over twenty years of Bloomsday programs at the Rosenbach we have never had so many readers under 10-years-old! Fathers and their children “rejoyced” together in reading Ulysses for an audience of over 1,400 people.  This was a new precedent for Rosenbach Bloomsday programs, and one we hope to continue. 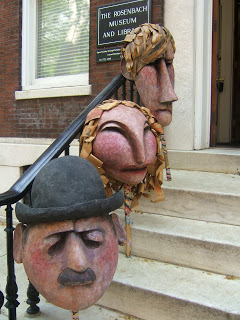 Bloomsday (a term Joyce himself did not employ) was invented in 1954, on the 50th anniversary of the events in the novel, when John Ryan and the novelist Brian O’Nolan organized what was to be a daylong pilgrimage along the Ulysses route in Dublin. The Rosenbach’s Bloomsday started in 1992 with a public reading of selected passages from the novel. I recently had the opportunity to talk with Carol Shloss, one of the original organizers of the Rosenbach’s Bloomsday.

The Rosenbach puppets were made by Carol Shloss and Allan Troxler for the first international James Joyce Conference to be held in Philadelphia in 1987. Carol and Allan, Swarthmore classmates, had both been members of the Bread and Puppet theater, where they learned the arts of larger-than-life size puppet making and street theater. They were constructed in North Carolina and arrived in Philadelphia in three refrigerator boxes on a greyhound bus. Once freed from their travel cases, they were  used at the head of a bagpipe procession from the Rosenbach Museum through Rittenhouse Square to the Curtis Institute on Bloomsday 1987.

We are excited to welcome Carol Shloss back the Rosenbach this fall. She will lead the Wednesday evening sessions of the Ulysses reading group, starting in October. The reading group is a fun and painless way to read (and ﬁnish!) James Joyce’s masterpiece Ulysses for both ﬁrst-time readers, and experienced readers revisiting the text. The nine-session course incorporates episode-by-episode discussions and lectures. Shloss has recently returned to the Philadelphia area after many years of teaching at Stanford.  In the world of Joyce scholarship Shloss is a hero. She was instrumental in breaking the Joyce estate’s strong hold on copyright access to reproduce and publish parts of Ulysses. Click here to read more about her efforts.

Registration for the Ulysses reading groups begins on August 15! All reading group participants are invited to read at the Rosenbach’s 2014 Bloomsday program.