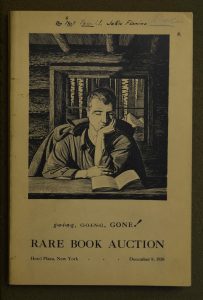 Cover of the catalogue for the charitable auction held at the Hotel Plaza, New York City, December 8, 1938. This copy belonged to John Fleming, who catalogued the items for sale. Note the Rockwell Kent image featured on the cover. Ro1 938b copy 3

In December, 1938, dark clouds of persecution and dictatorship hung over Europe, as the world tipped on the brink of war. Just weeks before, on November 9 and 10, mobs in Germany and Austria had vandalized Jewish-owned businesses and houses of worship in events commonly known as Kristallnacht, or “Night of Broken Glass.” The Nazi regime’s policy of persecution against Jews and other ethnic, religious, political, and minority groups would, of course, intensify in the coming years, resulting in the horrors of the Holocaust.

Hitler’s “Final Solution” remained in the future in 1938, though informed onlookers in the United States realized the danger faced by the Jews of Europe as ethnic, religious, and political antipathy intensified, and a growing refugee crisis demanded attention. Dr. A.S.W. Rosenbach, the United States’ leading rare book dealer and a prominent member of the American Jewish community, decided to put his skills in the rare book trade (along with his impressive set of social and business connections) to work on behalf of the displaced and oppressed.

Eighty years ago, on December 8, 1938, Dr. Rosenbach hosted a rare book auction at the Hotel Plaza in New York City that raised $35,000 for two American committees working to assist refugees fleeing their homelands. The fundraiser was an interfaith effort, having been sponsored by the Joint Distribution Committee of the American Funds for Jewish War Sufferers and the Committee for Christian Refugees. Through his work with the Joint Distribution Committee on this charitable endeavor, Dr. Rosenbach wielded his book company’s reputation and resources for the cause’s benefit.

Key to the charity auction’s success was its high-profile nature, due in no small part to Dr. Rosenbach’s work to attract the interest and support of celebrities and cultural leaders for the cause. Trendsetters such as author Christopher Morley and radio star Major Edward Bowes served as auctioneers. Members of the organizing committee included such luminaries as publisher Alfred A. Knopf and Col. Theodore Roosevelt. Famous book collectors, artists, and intellectuals, including New York’s own J.P. Morgan, perhaps the most notable book collector of his day, donated items to the sale.

Letters now housed in The Rosenbach’s archives reveal how enthusiastically various cultural figures like Pulitzer Prize-winning author Edna Ferber and legendary composer Irving Berlin supported Dr. Rosenbach’s efforts at assisting refugees. They also highlight the doctor’s persuasive skills. Ferber wrote to Dr. Rosenbach on October 28, 1938, in response to his invitation to join the auction panning committee: “Committees have had a kind of horror-connotation for me ever since my newspaper reporting days, years ago. I almost never serve on them, but it seems to me that if I can be of any use to you in the book auction you are planning for December 8th I should be less than civilized if I were to refuse.” In making a donation to the auction, Irving Berlin, himself an immigrant Jew, wrote to Dr. Rosenbach on November 8: “I am only too glad to do this knowing how worthy the cause of raising funds for the German refugees is. My very best to you.” 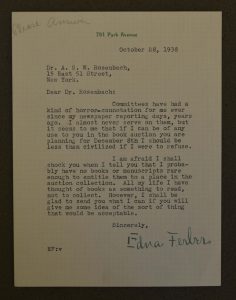 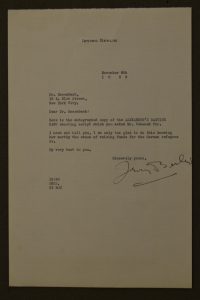 The auction itself was a glittery affair. Famous American journalist Dorothy Thompson, who had been expelled from Germany by the Nazis in 1934, opened the event at the Hotel Plaza on December 8. “It is poetic justice that this gathering of book lovers should come to the aid of the victims of those who are book burners,” Thompson told the crowd, as reported in The New York Times the following day. She proceeded to lead the auction of a manuscript essay donated by the illustrious scholar Thomas Mann, who had been expelled from Germany by the Nazis. The essay, which analyzed Richard Wagner’s opera Der Ring des Nibelungen, fetched $1,300. Later, some of Thompson’s own writings were auctioned off. The famous actor Eddie Cantor led the sale of an article Thompson had written titled “To a Jewish Friend,” which brought $1,100. And a second article, titled “‘Tis of Thee,” garnered $750. Other items, most with prominent celebrity and book collector connections, yielded impressive prices. Arturo Toscanini, for instance, wrote a musical manuscript specifically to be sold at the event, and it netted $1,200 for the charitable cause. 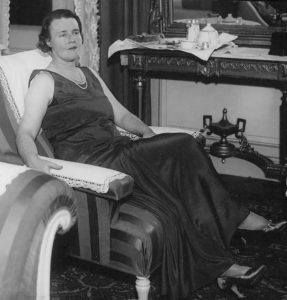 Portrait of Dorothy Thompson, who served as an auctioneer at the charity event, seen here in 1930. Image courtesy of Wikimedia Commons. 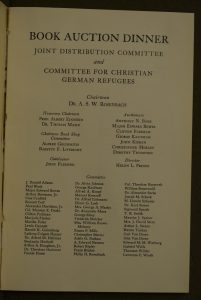 First page of the auction catalogue, listing many of the famous intellectuals, businesspeople, and society figures involved in the event. Ro1 938b copy 1 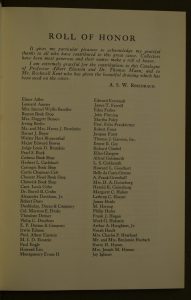 “Roll of Honor” with thanks from Dr. Rosenbach, included in the auction catalogue. Ro1 938b copy 1

The auction catalogue itself, several copies of which reside at The Rosenbach, was a work of bookish artistry in its own right. Rockwell Kent designed an image for the cover, critic and novelist Thomas Mann wrote a foreword to the catalogue, and Professor Albert Einstein (himself a German Jew exiled from his homeland) wrote a preface that summarized the spirit of the affair. “This catalogue bears witness to an undertaking of practical aid on behalf of peoples in Europe who are being unjustly persecuted,” Einstein began. “It is an act of joint cooperation on the part of Christian and Jewish philanthropists, who serve and remain true to the cause of humanity. Such efforts mitigate grievous distress and, over and above all this, strengthen those social forces in their own land which alone can lead to real and lasting security.” The famous scientist then offered words of wisdom that reflected the humanistic concern of the auction. “In our times, it becomes particularly clear that humanity and readiness to serve mean more to society than all wisdom and all technical progress. For the possession of power as a tool is less decisive than the directed idea in which it is used.” 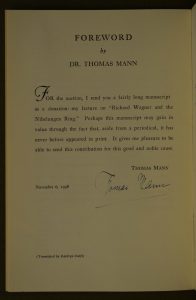 Foreword to the auction catalogue. This copy features the signature of the author, Dr. Thomas Mann. Ro1 938b copy 1 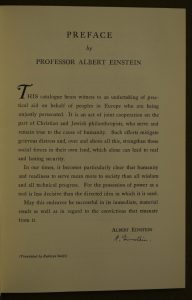 Preface to the auction catalogue by Albert Einstein. This copy features Einstein’s signature. Ro1 938b copy 1 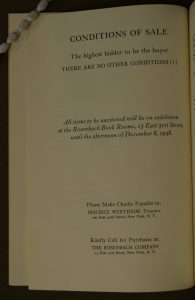 Details of the auction, including mention of the Rosenbach Book Rooms at 15 East 51st Street in New York City. Ro1 938b copy 1

A New York Times article published after the sale noted that some items remained to be had following the auction. “Many valuable items still remain, since there was not time to offer them at the auction. These have been placed on exhibition and sale at the book rooms of Dr. A.S.W. Rosenbach, 15 East Fifty-first Street,” the Times reported on December 16, 1938. “Among these are the original autographed manuscript of Robert Louis Stevenson’s ‘The Justice Clerk,’ dedicated to his wife; a collection of Thoreau’s manuscripts with his original manuscript, ‘Merrimac Map’; first Philadelphia edition of Walt Whitman’s ‘Leaves of Grass,’ a first edition of Wilde’s ‘The Importance of Being Earnest,’ and modern first editions and manuscripts.”

In a time of global upheaval and increasing calamity for Jews and other peoples in Europe, Dr. Rosenbach used some of the best tools at his disposal—namely his organizational ability, his extensive society connections, and his stellar reputation in the book trade—to make a difference in the cause of humanitarian relief. “Congratulations on the magnificent affair last night!” Major Edward Bowes wrote to Dr. Rosenbach on December 9, 1938. “Such a showing is a tribute to the esteem in which you are universally held!!”

The events of eighty years ago exemplify Dr. Rosenbach’s professional accomplishment as a book dealer as well as his commitment to human rights and universal justice. Dorothy Thompson’s observation that “book lovers should come to the aid of the victims of those who are book burners” embody the spirit of an event that brought together the glitterati of the American book world for an honorable cause. 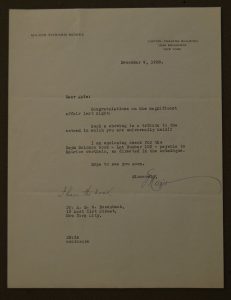 One thought on “Dr. Rosenbach’s Message to a Troubled World: Unity and Hope through Knowledge and Books”