I’m Emily, a curatorial intern who has spent the spring and summer at the Rosenbach. As my internship comes to a close, I’ve been reflecting on the amazing array of books I’ve been able to see at the Rosenbach this year. I’ve had my eye out for interesting endpapers (the sometimes decorated papers found on the reverse of covers and first and last free leaves in books), and have certainly not been disappointed! My research focuses on marbled endpapers in the late 1800s and early 1900s, and I’ll share two examples from the Rosenbach collection here.

Marbling is a paper decoration process where a craftsperson manipulates colorful pigments that float on top of a chemical bath. Paper is laid carefully on the surface of the bath and removed, the design absorbing and fixing onto the paper. Marbling has roots dating back hundreds of years to ink and paint floating methods, including suminagashi in Japan and ebru in the Ottoman Empire. The technique reached Western Europe by the early 1600s.

Marbling came in many forms, and marbling aesthetics extended to other techniques too, especially when the industrialization of book production caused many craft processes to be reconsidered. The 1800s and 1900s hosted a dynamic array of ideas on paper as marbling machines emerged and printed papers imitated marbled designs.

The collection of fine press books at the Rosenbach includes a copy of
William Loring Andrews’s  A Choice Collection of Books from the Aldine
Presses, printed in 1885.

Andrews was a book scholar, the first librarian of the Metropolitan Museum of Art, and a collector of rare English and American books. In this privately printed text, Andrews gives detailed descriptions of books printed in Venice by the Aldine Press and its descendants. The covers and endpapers of the book show a marbled pattern with many shades of blue and a gold vein. The two distinct patterns indicate separate processes, where the blue design was executed and set, and then the gold applied later. Both layers could be done by marbling or by lithographic printing.

Bookbinders considered how the marbled endpapers would work with the rest of the binding, whether the outside covers were marbled or not. In 1902, Certaine Learned and Elegant Workes of the Right Honorable Lord Brooke was rebound by the Club Bindery. It belonged to Robert Hoe, a collector with an extraordinarily valuable group of books. The Club Bindery was set up in New York in 1895, with the aim of bringing high standards of bookbinding associated with Europe to the United States. Many talented bookbinders joined, and Hoe himself was involved in operations. The binding is marked with the name “Leon Maillard,” a prominent French bookbinder employed by the Club Bindery, and an “RH” refers to Hoe.

The Club Bindery imported many supplies from France, and the marbled paper used in this book was probably no exception. The pigments were carefully moved with tools including combs to create the peaks and curves of the fine color lines. The bookbinder may have selected the paper because of how the mustard yellow in the marbling matched the tooled edges and cover of the book, and was set off by the other bright colors on the page. The pattern was neither too big and overwhelming nor too small and busy. 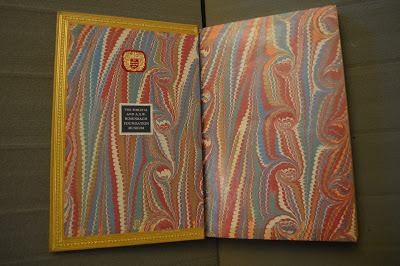 I hope that this exploration of the marbling in and around these books may inspire you consider the surprises that come before the story even begins!

– – – –
Emily Pazar just finished a curatorial internship at the Rosenbach and is a graduate student in the Winterthur Program in American
Material Culture at the University of Delaware. Her masters thesis research is focused on paper
marbling in the late nineteenth through early twentieth centuries in the United
States, studying the ways that marblers reacted to industrialization and
craft revival and how bookbinders used marbled papers in their work.